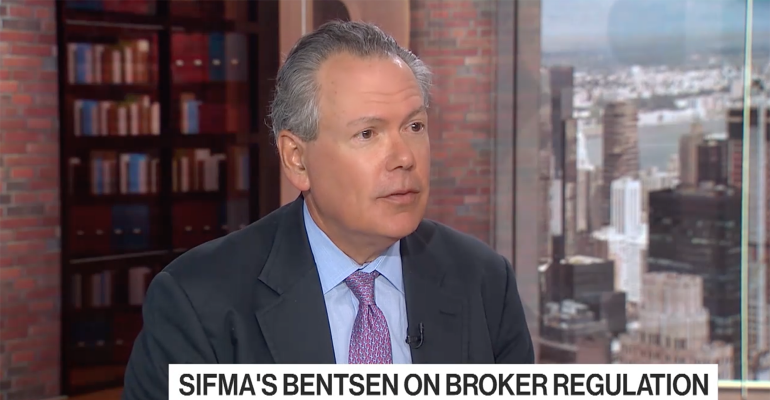 SIFMA’s Bentsen: SEC Proposal “Brings the Rules Up to Where the Industry Already Is”

SIFMA President and Chief Executive Officer Ken Bentsen says the Security and Exchange Commission’s proposal for a best interest standard for brokers “effectively accomplishes” what the Department of Labor was trying to do with its fiduciary mandate, but it “does so in a way that is conducive to the brokerage model.”

Bentsen said on a Bloomberg Television interview that he largely approved of the SEC’s current proposal for a best interest mandate for brokers (Regulation BI) because it raises the standard for brokers while allowing consumers to choose whether they want to transact with a financial services firm in a one-time, commission-based model or an ongoing managed account model.

“Most brokers meet this bar effectively,” he said. In fact, “brokers are examined and regulated in a much higher capacity than advisors are.” The SEC is trying to “bring the rules up to where the industry already is,” he said.

When asked why then we need a rule at all, Bentsen said, “We need to make sure the investors understand what duty is owed to them. We need clarity around the rules, and let’s have the standard catch-up to where [the industry] is today.”

He admitted the rule will help weed out the kind of bad actors that former DOL Secretary Tom Perez frequently used to illustrate the need for the DOL’s efforts, “but for aggrieved clients, there is already redress under arbitration, so you don’t always hear the end of that story.”

He said he would like to see some changes that would make the regulations consistent with others that already exist and it needs to better deal with how to handle dually registered advisors.

“Most (advisors) are dual-hatted,” he told Bloomberg, referring to the fact that most advisors are both brokers and registered investment advisors. “The client picks and chooses what is appropriate for them. Often the clients have both.”