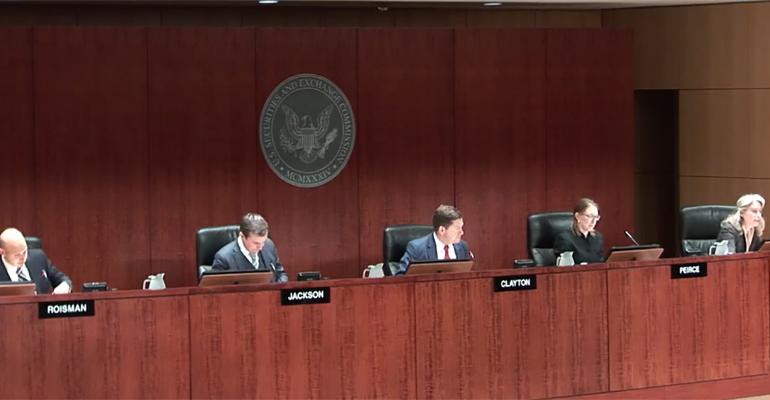 After 37 years, the Securities and Exchange Commission moves forward with a plan to change the accredited investor definition.

The Securities and Exchange Commission voted 3-to-2 to release a proposal Wednesday that would expand the pool of accredited investors by changing the current definition of who qualifies to invest in private markets. Notably, the new definition would include people with certain designations, starting with the Series 7, 65 or 82. The proposal also qualifies SEC- and state-registered investment advisors as accredited investors.

The current definition of an accredited investor—based on an individual’s net worth and income—hasn’t been modified in any meaningful way since it was enacted via the SEC’s regulations governing the sale of unregistered investments in 1982. The SEC will maintain those financial thresholds, which won’t be adjusted for inflation.

Now the agency is adding “new non-financial categories of individuals that have the demonstrated financial sophistication and other attributes that would indicate they should not be excluded from this very large and important market,” said SEC Chairman Jay Clayton, during an open meeting on the topic.

As they stand, the requirements are meant to ensure investors who want to participate in less regulated, potentially riskier private placements and funds - like private equity and venture capital - have the means to evaluate options wisely and absorb potentially outsized losses. The income and asset-level proxies are meant to be signs of investor sophistication.

Clayton has pushed for wider investor access to private markets, in part because the number of securities in public markets has dropped dramatically. Clayton and other advocates argue that vast swaths of U.S. investorrs are missing out on participating in the the value-creation found in these less regulated markets.

In June, the SEC issued a concept release for public comment to consider expanding the definition. Several state attorneys general later signed a comment letter urging the SEC to reconsider the move. Clayton recently testified on the topic before the Senate Banking, Housing and Urban Affairs Committee.

The proposal released Wednesday also adds the term “spousal equivalent” to the definition, so that married couples would be able to pool their finances to meet the theshhold. It also expands the categories of legal entities, including Indian tribes, that qualify; any entity owning investments of more than $5 million and not formed for the specific purpose of acquiring securities being offered would be considered qualified. It’s also recommending some kind of way to test institutional investors for their investment knowledge, as opposed to meeting an asset level.

The SEC also added a provision qualifying "knowledgeable employees" of certain private fund sponsors to allow the individuals who participate in a fund’s management to invest in their own products.

“We believe the proposed new accredited investor categories for individuals and entities would capture those investors that either have the ability to bear the risk of loss or have the requisite ability to assess an investor opportunity,” said Bill Hinman, director of the division of corporate finance.

Critics say the proposal does not protect investors adequately.

“This release simply repeats by rote the intuition that exposing investors to these markets comes without real corresponding costs,” Commissioner Robert J Jackson, Jr. said in his dissent. “Because there is no free lunch in financial markets—and pretending otherwise puts ordinary investors at risk.”

Jackson said the proposal did not include any cost analysis of expanding the eligibility criteria. For example, whether investors who use brokers and advisors to participate in private markets need less regulatory protection because of those relationships.

“The intuition behind that suggestion is that investors can efficiently identify and avoid brokers in this area who fail to protect them from fraud. That is an empirical assertion that should be tested, rather than assumed away.”

Jackson’s office conducted its own analysis on that point, based on public data of private securities issuances and complaints against brokers. He found that brokers who put investors in private securities are unusually likely to be subject to customer complaints related to sales practices and regulatory inquiries about misconduct.

“Contrary to the release’s intuition that brokers will protect ordinary families investing in private markets, the evidence shows that those families will be dealing with the brokers most likely to have wronged their clients in the past,” he said.

The analysis also found that past investor harm facilitated by brokers in private markets is highly predictive of investor harm in the future.

“Even supposedly sophisticated investors under our current standards have difficulty avoiding high-risk brokers in the private placement market,” Jackson said. “If investors are already struggling to sort good brokers from bad in these markets, it’s far from clear why we should expose even more investors to those risks.”

Clayton responded at the end of the hearing, saying he was skeptical about allowing investors to qualify based on a recommendation by a broker because of the lack of alignment of interests.

Commissioner Allison Lee also said the proposed change was overinclusive and would expose investors with no ability to handle the risks to private securities.

Finally, despite the fact that it has been 37 years since the current financial thresholds were created, the new proposal does not adjust them for inflation.

The proposal now opens to a period of public comment for 60 days, after which the commission will review and decide on how to move forward.