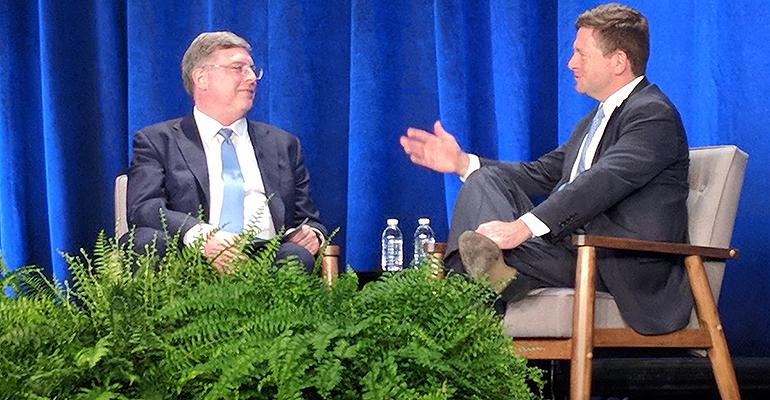 The SEC chairman said the agency’s proposed rules around improved disclosures and a best interest standard for broker/dealers and advisors are meant to meet the reasonable expectations of clients, regardless of the business model.

Securities and Exchange Commission Chairman Jay Clayton said he did not think there was “any daylight” between the standards of conduct his commission is recommending for representatives of broker/dealers, and those for investment advisors, while still allowing both business models to co-exist as long as disclosures are made.

Speaking at the annual conference of the Financial Industry Regulatory Authority on Tuesday afternoon, Clayton said the SEC’s proposed rulemaking package, including the introduction of new, shorter and more concise disclosures for broker/dealers and advisors, as well as what the SEC is calling a “Regulation Best Interest” requirement for broker/dealers to ensure they put their client’s interests ahead of their own, were all drawn from a singular lens: What is the expectation of the client?

“They can’t expect guaranteed returns. But they can expect that the professional does not put their own interest ahead of the investors’ interest,” he said.

What that looks like in practice between advisors and broker/dealers “is going to be different,” he said, emphasizing the rule is meant to make obvious the difference between the one-time-transaction brokerage model, and an ongoing, time-based investment advisory model.

“But the core duty is the same,” Clayton said. “There are people who try to say there is daylight between the two. But not the way we think about it.”

For broker/dealers, that requires not just “best interest” recommendations that put client interests’ before those of the broker/dealer, but transparent disclosures around the relationship. “Not the investments,” he said. “But I would hope we could have a conversation that in less than two or three minutes I could explain the relationship: Here is how I get paid. Here is how I make money. Our disclosure form is essentially that conversation.”

Clayton noted the SEC deliberately avoided using the word “fiduciary” when articulating their ruling. “Fiduciary is a buzzword that can mean a lot of things in a lot of contexts,” he said.

“It is definitely a fiduciary principle,” he said. “I thought calling them both fiduciary, and then defining them, would not make it clear the relationship model is different.”

Clayton said the SEC recognizes there are many instances when a one-time transaction is better for clients than an ongoing management fee imposed by investment advisors—for instance, if the client is investing relatively small amounts of money or looking only for an annuity or fixed-income security that would be held to maturity. In those instances, paying an ongoing annual management fee makes little sense.

“But I also want to make sure they are getting the protections they expect,” he said. “They want you to tell them how you’re making money, and you’re not putting your interest ahead of theirs.”

When asked whether he would support an elimination of certain share classes of mutual funds built around compensation structures for advisors, Clayton said “I don’t know that I’m personally there yet.”

“But you need to tell your client. ‘This is the share class, this is how much I get paid,’” he said. “What I don’t like is a broker telling the client ‘you pay me a fee and we’re done,’ and then I use a share class that continues to pay me. That I don’t like.”

The SEC’s proposed rules are open for public comment until August 7.

Clayton also said he was “surprised” at the amount of activity the SEC has been involved with around cryptocurrencies, but that the agency will put investor protection at the forefront of every decision they make in the space.

“We have created a phenomenal economy by following the law,” he said. “What we were seeing in the (initial coin offering space—where new cryptocurrencies are launched and sold to investors) is people not following the private placement rules in terms of disclosure, then taking the most advantageous aspects of the public markets, while providing none of the protections you’d get in those markets. And then saying this is okay, because it’s new technology. It did not take me long to figure out that’s a bad idea.”

Clayton said the SEC continues to talk to participants in the cryptocurrency space about creating viable offerings.