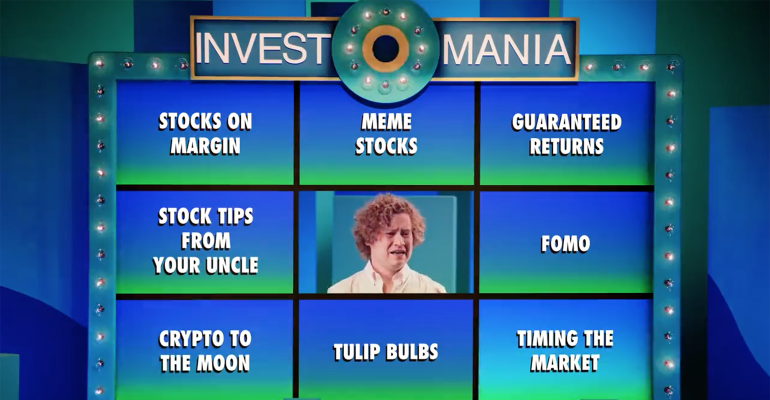 The agency was criticized on social media over its educational ‘Investomania’ campaign meant to encourage caution.

(Bloomberg) -- A new public-service campaign custom made for investing during these meme-filled times is sparking outrage from some on social media who say it pokes fun at the very people it’s meant to educate.

The pushback is less about the spot, which features a satirical TV game show called “Investomania,” than it is about who’s behind it: the US Securities and Exchange Commission.

Videos posted on the SEC’s YouTube account, which feature two contestants choosing where to put their money from options including “crypto to the moon,” “meme stocks” and “stocks on margin,” mark a fresh attempt by Wall Street’s main regulator to encourage people to research before investing. For many, the new approach seems to be landing with a thud.

Very disappointing to see SEC disparage investors in meme stocks as if they must have done it thoughtlessly - esp when @SECGov permits most trading to take place in dark pools. How about a video about dark pools @GaryGensler ? Or better yet, get trading into the open. https://t.co/V1YqKSreFY

“Memestocks” is a term we, along with so many of us, are guilty of using. It’s fun, calls attention to the subversive side of all of this, but as we’ve seen with the @SECGov’s video today, the term has entered the collective lexicon as a catchall 1/

In one of the SEC videos, the “Investomania” game show host turns to Brad, a red-headed contestant with wiry curls, informing him that it’s his turn to pick an investment. Brad immediately chooses “meme stocks” and slams on a button to “invest.” The decision is met with a loud buzzer, a bold red “X” across the screen, a pile of cash disappearing into a trap floor, and a pie spattered across Brad’s face.

The host responds with a facetious “ouch” as the fake live audience bursts into laughter. The 30-second SEC spot ends with a voiceover warning viewers that “investing is not a game,” encouraging them to take an investing quiz on Investor.gov website.

Investing is not a game. Take time to do your research, and protect your money.

In real-life retail investors who poured into meme stocks and digital assets are having a tough year. The crypto market saw $200 billion wiped out in a day after last month’s collapse of TerraUSD. Meanwhile, so-called meme stocks like GameStop Corp. and AMC Entertainment Holdings Inc., which surged in popularity in early 2021 at the height of the Covid-19 pandemic, have plunged.

The Investomania  campaign was “designed to generate conversation about the importance of independent, non-biased research in making investment decisions,” the SEC said a statement. “We’ve seen the real risks of investing on margin, following celebrity endorsements, and investing based on promises of guaranteed returns, and we’re happy to see that investors are talking about these things,” the agency added.

However, thus far, a lot of the reaction to the spot on “FinTwit,” the finance community on Twitter, has been focused on panning the SEC’s campaign, rather than conversing about the value of investment research.

This video series from the SEC is really just awful. The SEC is insulting the very investors it's supposed to be protecting and educating. But it's worse than that! For example, one of the videos is about margin investing.

This is a video from the official SEC's Youtube Page.

It seems to trivialize millions of retail investors, seemingly diminishes one of the most important market movements of 2021, and appears to poke fun at millions of average people joining the market.