/sites/all/themes/penton_subtheme_wealthmanagement/images/logos/footer.png
Recent
Recent
Nine Must Reads for the CRE Industry Today (May 7, 2021)
May 06, 2021
Publicly-Traded REIT Stocks Have Returned to Pre-Pandemic Levels
May 06, 2021
Booking Sees More Reservations for Travel as Vaccines Gain
May 06, 2021
World’s Vaccine Trailblazer Shows What Return to Office Will Look Like
May 06, 2021
Featured
Poll: 15 Classic Books on Investing and the Markets
Apr 03, 2020
Fifteen Must-Listen Business Podcasts for Advisors
Aug 14, 2020
25 U.S. Markets Adding the Most Multifamily Units This Year
Feb 03, 2021
The Top Colleges for Financial Planning
Oct 03, 2019
Bloomberg
brought to you by 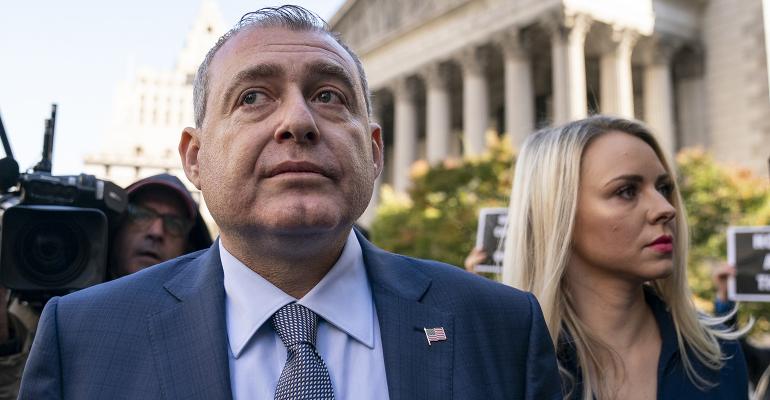 Despite raising capital from investors for six years, Fraud Guarantee never developed any insurance products or sold policies to investors and never generated any revenue, according to the SEC.

(Bloomberg) -- The U.S. Securities and Exchange Commission sued two associates of Rudy Giuliani, the former New York City mayor and lawyer for Donald Trump, alleging they defrauded investors of $2 million in a company that never got off the ground.

Lev Parnas and David Correia raised the money for their company, Fraud Guarantee, but used it to pay for “lavish personal expenses unrelated to the company,” the SEC claimed in a complaint filed Thursday in Manhattan federal court. They told investors they had invested hundreds of thousands of dollars of their own money and raised $5 million for the company, but “these representations were false,” the SEC said in the complaint.

Fraud Guarantee was intended to sell a form of insurance to protect investors against financial losses caused by fraudulent business practices. But despite raising capital from investors for six years, the company never developed any of the insurance products or sold policies to investors and never generated any revenue, according to the SEC. Investor money was instead spent at high-end resorts, restaurants, art and clothing, the complaint said.

The allegations cover some of the same conduct for which the two men are already facing criminal charges filed by Manhattan federal prosecutors. The Fraud Guarantee allegations are just one part of that case, which also alleges Parnas and another Giuliani associate, Igor Fruman, laundered foreign funds into U.S. political campaigns and skirted contribution limits as part of a plot to oust America’s then-ambassador to Ukraine, in what became a subplot to Trump’s first impeachment.

Correia pleaded guilty in October, including to one charge related to the Fraud Guarantee investments. Prosecutors are seeking a three-year prison term in his sentencing scheduled for next week. Parnas has pleaded not guilty.

The SEC suit did not name Giuliani or his firm as defendants.