/sites/all/themes/penton_subtheme_wealthmanagement/images/logos/footer.png
Recent
Recent
'Dark Money' and Tax-Exempt Organizations
May 16, 2022
Michael Kitces' #FASuccess Podcast: Beth Jones' Method to Deepen Client Relationships
May 16, 2022
Seven Must Reads for the CRE Industry Today (May 16, 2022)
May 16, 2022
Apollo Makes $1 Billion Bet on Indian Property With Lending Plan
May 16, 2022
Featured
The 10 Best and 10 Worst States in Which to Retire in 2021
Jul 15, 2021
Poll: 15 Classic Books on Investing and the Markets
Apr 03, 2020
Fifteen Must-Listen Business Podcasts for Advisors
Aug 14, 2020
Celebrity Estates: Jay Leno and Planning for Classic Car Collections
Feb 22, 2022
DOL Fiduciary Rule
brought to you by 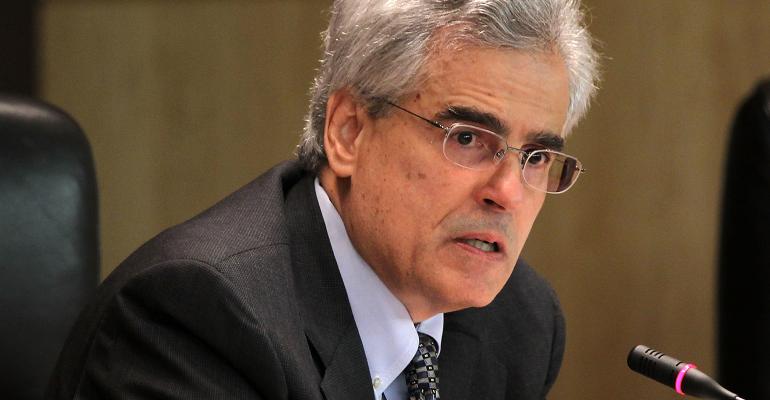 Luis Aguilar, former commissioner at the Securities and Exchange Commission, expects the agency to move on a fiduciary standard, especially if the DOL rule stays in place.

In his first public speech earlier this year, Securities and Exchange Commission Chair Jay Clayton mentioned the fiduciary standard as one of his priorities, a positive sign that fiduciary rule making could get done, according to former SEC commissioner Luis Aguilar.

“That tells me that it’s clearly on his radar screen because he didn’t have to mention it,” Aguilar said on a webinar sponsored by TD Ameritrade Institutional.

And if the Department of Labor’s fiduciary rule stays intact, that will give the SEC even more motivation to produce a rule.

“If that rule remains—I hope it does—I think the SEC then will have more of an impetus to take action. Because the duality of the markets of those covered by the DOL being just retirement advisors, and others not—the cat's out of the bag, so might as well take it all the way through,” Aguilar said.

Aguilar called it an “embarrassment” that the SEC still hasn’t come out with a uniform fiduciary standard. He blamed politics and a bandwidth issue.

“Six weeks after I got there, we had Lehman Brothers, we had the Reserve Fund breaking the dollar, we had Madoff, and then of course the Dodd-Frank Act and the JOBS Act came in,” he said. “There is a legitimate claim to having a bandwidth problem and having quite a lot of very important issues on the table.”

During his term, from 2008 to 2015, the agency went through four different chairs.

“There was a moment in time when this could’ve been done," Aguilar pointed out. "But the chair at the time, Chair Schapiro, never brought the matter to the forefront. So if you run into her, you should ask her that question.”

But Brian Hamburger, president and CEO of MarketCounsel, believes it’s unfair to blame just the SEC.

“[The SEC] may have permitted this practice to proliferate, but it was the private sector that continued to allow this,” Hamburger said. “And at the end of the day, it also was investors. Investors have historically been very apathetic about really entrenching themselves with regards to the distinction between advisors and brokers. So long as that’s the case, it’s going to be tough to imagine the SEC immediately changing tack given the issues that are backlogged on its docket today.”