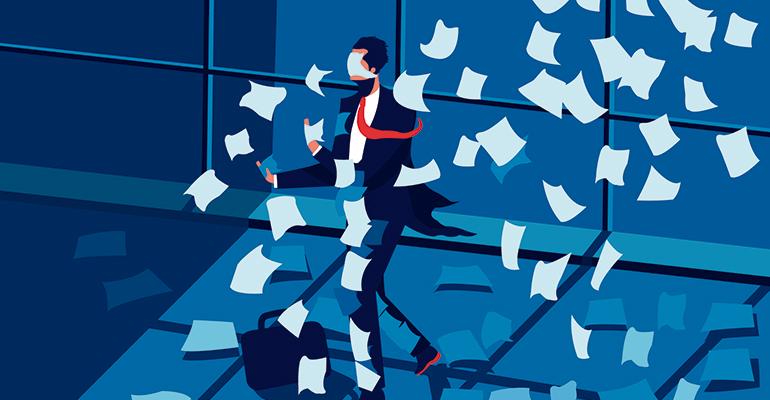 RIAs and broker/dealers say they are spending 9 percent more money -- and a lot more time -- on compliance and regulatory issues.

When President Trump was elected, some broker/dealers and advisors thought it would usher in an era favorable to financial services, with a pullback in regulatory reach and a return to a “friendlier” legal environment for small businesses.

“I think everybody said, ‘All this money that I’ve put into compliant systems and people and process, I’m going to be able to cut back on,’” says Alan Halfenger, partner and head of the global diversified financial practice at ACA Compliance Group. “Right off the bat that wasn’t true.”

While some regulations have been delayed or rolled back, the demands on compliance departments’ time and money haven’t slowed down, compliance officers say. Broker/dealers and advisory firms are investing more into ensuring they are complying with regulations including new rules and heightened disclosure and documentation requirements.

Take Rick Almaguer, chief compliance officer at SCF Securities, who says his compliance budget has increased in the last year, as has his staff level. But the rising cost of compliance systems for overseeing ongoing, routine tasks to look for red flags that might signal a regulatory breach is a particular pain point. His firm looked at one surveillance system that charged around $300,000 just for an initial setup, then ongoing fees between $10,000 to $15,000 a month, regardless of the number of license holders.

“You’re talking huge, huge budget requirements. I think what we have in place now is sufficient. But as we grow and the transactions and the complexity of the client accounts grow, we’re going to have to put that on autopilot,” he said. In the last year, firms have increased their compliance budgets by 9 percent on average, according to a WealthManagement poll of about 65 compliance professionals at both broker/dealers and registered investment advisors.

But much of those budgets are likely going toward the big issues, such as compliance with the Department of Labor’s fiduciary rule and cybersecurity, says Halfenger. The guys who run supervision of operations, meanwhile, get short-changed.

“They don’t want them traveling to offices as often, so their travel budgets get cut, or they put a lesser, younger guy in there,” he says.

Some firms are frustrated because they’ve invested a lot of time and money into compliance with the DOL rule, just for it to be delayed and possibly altered.

“[The industry] spent millions and millions of dollars to get prepped, and it just basically blew up,” SCF’s Almaguer says.

Laurie Keegan is the chief compliance officer at FBB Capital Partners in Bethesda, Md., and although her firm is fee-only and already acting under a fiduciary standard, the DOL rule has commanded the largest share of her compliance efforts. Ironically, the cost of compliance was paid more in time than dollars.

“I haven’t implemented much that would reflect all the effort that I put in to stay up with it,” she says. “I spend so much time reading and understanding and figuring out how that applies to our firm. Then really the change is so minuscule, I think, a huge investment of time for such a small change.”

Ronald Myers, managing member at Fortune 360 Group, a hybrid RIA in Plantation, Fla., expects to increase his compliance budget by half going into next year, due to the firm’s investment in new billing software, CRM and a new platform for model trading. After that, he expects double-digit increases in the compliance budget for the next couple years.

On top of handling the compliance duties, Myers also runs a book of business. (His firm has about $250 million under advisement.) He spends more than 40 percent of his time on compliance and administration activities.

“It’s cutting directly into the quality time that should be, where I’d like to see more of that focus on clients, but I’ve got so many obligations on compliance and admin that I can’t,” he says. The DOL rule is, of course, a top pain point for firms. Mike Pagano, executive vice president of compliance, risk and legal at 1st Global’s corporate RIA, believes there are already too many disclosure requirements; the DOL rule will only dramatically increase the number of pages clients have to deal with.

“It’s my view that piling on more disclosure, especially having the disclosure come from the retail seller as opposed to the custodian, whose really got the best access to that data, is pouring money down a hole,” Pagano says.

Many clients have actually asked the firm to shut off confirmations and statements.

“They’re getting inundated with so much information,” he says. “I’m not feeling, as a compliance person, that investors actually want even more disclosure.”

Myers is also frustrated by the additional paperwork as well as documentation required under the DOL rule. As a hybrid RIA, his firm is already acting as a fiduciary.

“The difference now is there are extra forms, there are extra steps that you have to take to prove it,” he says. “A lot of them are redundant, and it can get really frustrating. Sometimes I find myself answering the exact same question or something that is remarkably similar on multiple forms.”

The CFP Board recently expanded its fiduciary standard, and some states, including Nevada, are crafting their own, moves that could make things even more challenging for compliance professionals.

“Just like on the DOL side, the cybersecurity side, we really would like the primary regulator, the SEC, to come out with, ‘Here’s what you need to do,’ rather than state-specific rules, because that just makes it challenging from a compliance standpoint to deal with competing regulations or contradictory ones,” said Adam Schaub, chief compliance officer of 1st Global.

That lack of coordination between regulatory entities is a pain point for Steve Youhn, chief compliance officer at ProEquities in Birmingham, Ala. And the issue extends into rules on senior protection and cybersecurity as well.

“Every day it seems like we’re on the phone with legal trying to navigate the regulatory maze caused by lack of coordination,” he says. “If government agencies continue to pass their own rules without regard to what other agencies or SROs are doing, then it’s going to be a lot more challenging. If we’ve got 50 states out there and 20 versions of fiduciary rules or 20 versions of cybersecurity rules, it will be a significant challenge.” Overall, CCOs say the regulators have become more nit-picky, digging into areas they’ve never touched before—even those that, some argue, they have no jurisdiction over.

Almaguer says his firm’s last Financial Industry Regulatory Authority audit, for example, lasted 308 days; this time around, the regulator asked a lot of questions about fee-based accounts. The b/d has a corporate RIA, SCF Investment Advisors, a separate entity from the b/d.

“FINRA started requesting information on our fee-based accounts, and I said, ‘Excuse me, but that’s not under your purview,’” he says. “So that was a real intrusion, which kind of took me by surprise to be quite honest with you. They were looking at that and they were looking at the migration between entities with the accounts going from the commission side to the fee-based side and vice versa, how is that more beneficial to the client, those kinds of things.”

One hybrid advisor, who declined to be named, says his broker/dealer now charges a compliance fee to monitor the fee-based assets under his own RIA.

1st Global’s Pagano says FINRA first started asking about fee business during their 2011 audit. The regulator asked more about it in 2013 and even more in 2015.

“Thus far though, it’s really just been asking for information,” he says. “They never included any advisory topics in any of those exceptions as we go through the process of remediation at the end. I guess they’ll be a big sea change if they wind up including any of those in there. That’s probably when we’d get to a point where we would start to say, ‘Hey, you don’t even have jurisdiction over this.’”

“[FINRA sees] their revenue going down,” Schaub says. “They have been asking those types of questions about RIA accounts, which they didn’t used to ask about. And it did seem like they’re trying to get their foot in the door and/or make the case that they should be the self-regulatory organization for RIAs.”

John Olsen, chief compliance officer for Stifel Financial’s private client group, says FINRA is cracking down on non-disclosure of outside business activities and private securities transactions. The regulator is dolling out longer suspensions for non-disclosure.

“I’d never seen anything like the kind of suspensions they’re handing out now for stuff they just didn’t do before, at all,” he says. “A lot of times, you just get a letter of caution. They might have a broker sit for five days or 10 days, but we’re getting some with 20, 60-day, 90-day suspensions. Those are some heavy duty suspensions for nondisclosure of OBAs, PSTs.” The Future of Compliance

While the regulators may focus on specific areas, such as cybersecurity or senior investors, firms must continue to keep up with the routine compliance tasks.

“It’s not like you get to put all the routine stuff on the side and focus on the new hot topics in the industry,” Pagano says.

1st Global is betting the future of compliance is going to be automation. The firm invested in systems from RegEd and SunGard to automate some routine tasks, including branch office reviews, advertising reviews, registered rep onboarding, outside business activity reviews and outside brokerage account activity reviews.

“Right now, it’s automated, but humans still need to operate most of it,” he says. “I think as time goes on, what’s going to wind up happening is the dial is going to move so human interaction will be less and less.”

ProEquities also invested in systems from RegEd and SunGard. But Youhn believes that kind of investment might be difficult for smaller firms.

“These are six- and seven-figure technology resource budgets to roll out these new resources. Not all firms have that type of financial backing where they can roll out this state-of-the-art technology.” n