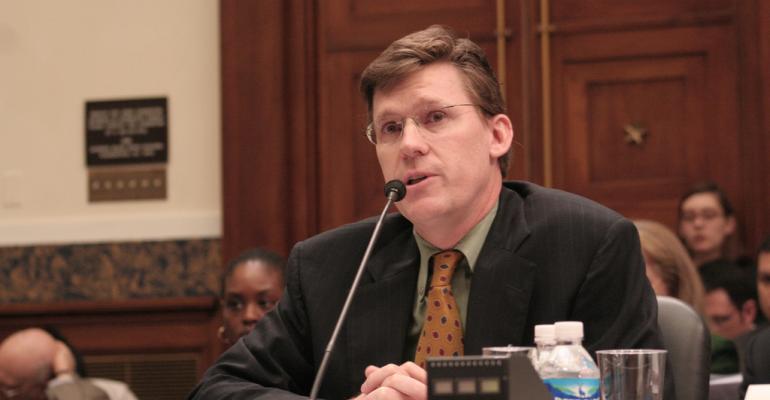 Mercer Bullard, president and founder of Fund Democracy, an investor advocate group, and an associate professor of law at the University of Mississippi.

Financial Services Committee Chairman Spencer Bachus recently introduced a bill in Congress that would create one or more SROs to oversee investment advisers. The legislation provoked heated reactions from state securities regulators and investment adviser groups. You’d think no one would want adviser examinations more than vocal investor advocate Mercer Bullard, but he takes major issue with Bachus’s bill. He spoke with WealthManagement.com about what’s at stake, as well as other issues facing investors.

“It would be like having a national park where the wealthy are allowed to use it for free, but only middle-income and lower-income persons are required to pay a fee.”

“Ironically, it completely removes Madoff and anybody like Madoff from its coverage. Madoff is precisely the example Bachus used as a justification for this bill when it is precisely the Madoffs who clearly would not be covered because well over 90 percent of his assets were qualified purchaser, or otherwise institutional assets.”

WealthManagement.com: What do you think is wrong with the Bachus bill?

Mercer Bullard: It’s most glaring flaw is that it imposes a tax on small advisors and small investors, solely because they’re small. And that happens because it creates an SRO that will collect fees from its members to pay for exams. The only members are going to be small advisors, with small clients. It would be like having a national park where the wealthy are allowed to use it for free, but only middle-income and lower-income persons are required to pay a fee. Usually regulation works the other way around. Normally, it is the larger investors and larger entities that cross-subsidize the costs of regulating smaller advisors and smaller investors. While you can argue that it’s unfair, because it is a wealth transfer, that is not what I’m talking about. You’re asking for these small advisors to pay something, while the large advisors simply don’t have to pay at all. It has so radically carved out a huge chunk of the high-net-worth investor and large advisor population.

There are a couple caveats to that. One of the major ones is, it carves out mutual funds, and mutual funds are clearly the products of the retail investor.

The costs will be prohibitively high as a practical matter because you can’t have a regulatory regime that spreads the administrative cost over such as small asset base.

WealthManagement.com: Why is it that only these smaller guys are going to have to pay the fees? Aren’t larger advisors also under the proposed SRO?

MB: There’s an exception for advisors 90 percent of whose assets are qualified purchaser assets, or otherwise, institutional, high-net-worth clients. That’s the second major problem with it; that’s an irrational test. Think of it this way, if you had $1 billion under management, and $900 million were one investor, you could have $100 million from thousands of retail investors, and you will not be a member of the SRO. The only reason is because you have that one $900 million account. From an investor protection point of view, that’s inherently irrational.

WealthManagement.com: What changes do you think should be made?

MB: So the two changes that really need to be made are one—they’ve got to eliminate the qualified purchaser exemption because that is what eliminates such a huge percentage of high-net-worth clients. That’s anyone with $5 million in investments, and that’s the most egregious aspect of the exclusions. Then, they’ve got to eliminate the 90 percent because what should trigger examinations is having a lot of clients. It shouldn’t be that whether my advisor is examined depends on whether he has a couple of really wealthy clients. That’s completely arbitrary. It should be a function of is this an advisor who’s got a lot of clients that are not sophisticated and need protection. The way the 90 percent test is structured, it treats that $900 million/$100 million example as if it’s completely irrelevant the total number of clients are. And ironically, it completely removes Madoff anybody like Madoff from its coverage. Madoff is precisely the example Bachus used as a justification for this bill when it is precisely the Madoffs who clearly would not be covered because well over 90 percent of his assets were qualified purchaser, or otherwise institutional assets.

But on the whole, I think something needs to be done in order to get advisors examined, and if the SRO is the only way to do it, that’s what they should do. If that is the only way that we’re going to see advisors examined, then they should create an SRO. That’s where I depart from the advisor community. This is an investor advocacy position. I’m also associated with a financial planner, Plancorp, and my guess is that we would probably not be covered because we have enough assets that are qualified purchaser assets. My firm, it’s a very tiny part of what I do, but it’s a perfect example of the kind of firm that really should be covered that probably wouldn’t be.

WealthManagement.com: Last year, a couple of law students from Oxford, Miss., announced plans to create an SRO to rival FINRA--SROIIA. How does SROIIA play into this?

My advice to the financial planning community is, you need to think about the point at which the SRO becomes inevitable, and then your options are going to be to either create one yourself or let FINRA take that role. Some students on their own, with a little creative prodding on my part, started it, and I have no stake in whether there is or isn’t one, other than I think it’s a neat idea. The bill clearly allows for an SRO other than FINRA. But as to whether that is practicable, we still don’t know. No one would argue that at this point SROIIA has enough purchase in its current state to be eligible to be the SRO. But there’s still a lot of time left between now and when the Senate might take this up. If I had to choose, I think the user fee is a better option. I would rather see a user fee and have examinations done by the regulators. I’m not going to oppose an SRO if that’s the only way to get the examinations, because my primary role is in an advocacy position. But there shouldn’t be this entirely pathetic opt-out in order to get political support from ICI and MFA.

MB: So you don’t think the SRO is the only option to solve this problem?

Clearly, Congress could decide to adequately fund the SEC, but it has declined to do so for many years and there’s no sign that it’s serious about giving the SEC the funding it needs.

WealthManagement.com: What are the biggest issues facing investors, and what should advisors be doing differently with their clients?

MB: Nothing has really changed over the last decade. Don’t take more risk than you need to take. Save more, and spend less so that you will have financially security in retirement. Diversify your investments taking into account your time horizon. You follow those three rules, and you pretty much have 99 percent of what you need to know. I’m also a passive investing advocate, but I don’t think it’s unreasonable for somebody to want to try to hunt down active managers who may outperform the market. But don’t spend money on active management, when there’s no evidence you’ll get any kind of payoff.

WealthManagement.com: Any specific investment strategies that you think are dangerous these days?

MB: I think insurance products are always inherently questionable. Equity indexed annuities should be looked at with an extremely skeptical eye. Many insurance products are essentially combining two different things and charging much more than if they were purchased separately. You can buy a guarantee by putting money into Treasuries, and you can buy some upside by investing in an S&P 500 fund, or any other index stock fund. But insurance products put those things together in various ways and then double the price. And it’s very rare that those products make sense, especially for the average retail investor.

You should know exactly how your financial advisor is compensated and what they’re incentives are. While I don’t have any problem with a commission-based model, I do have a problem with a model where they’re recommending mutual funds, for example, and every mutual fund is going to pay them a different amount for providing exactly the same services. If I’m providing X services, my compensation should be the same regardless of what product I recommend.

WealthManagement.com: How can advisors overcome that?

MB: It’s hard to do that in a commission-based world. You’re technically not even allowed to rebate commissions. Various regulations, to some extent, force you to charge more for identical services even if you think the product that pays you more is a better product. We have a set of perverse incentives that I’m hoping the DOL fiducaiary proposal will address in the absence of any kind of meaningful action by the SEC. This is an area where the SEC has completely dropped out, and done nothing. Fortunately, DOL is taking it up. DOL officials have talked about revenue-sharing; they’ve brought enforcement action related to revenue-sharing. And every sign is that that’s going to be addressed in their rule. They just don’t buy this obviously conflict-based approach.