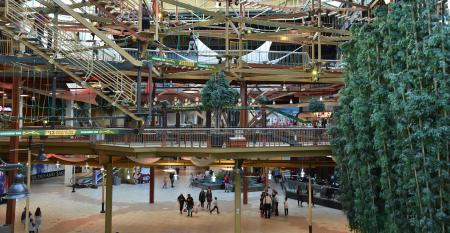 N.Y.’s Biggest Mall Borrowed Big and Now Can't Pay
May 14, 2021
Destiny USA, the state’s largest mall, may not generate enough cash to keep running and pay its debts this year.

Salad Chain Sweetgreen Is Planning a U.S. IPO This Year
May 12, 2021
Founded in 2007, the chain had developed a cult following among bankers, tech workers and others.

Kroger Joins Drone Delivery Race with Pilot from Ohio Store
May 03, 2021
The supermarket chain is partnering with Drone Express to deliver groceries.

Pret a Manger Looks to the Suburbs Instead of Skyscrapers
Apr 23, 2021
CEO Pano Christou said he scrapped Pret’s “follow the skyscraper” expansion program.

Pandemic Accelerates the Addition of Mixed Uses to Open-Air Retail
Apr 21, 2021
While open-air centers have performed well in themselves, the addition of mixed uses makes them even more attractive to investors.

Kroger Is Amassing a Robot Army to Battle Amazon, Walmart
Apr 15, 2021
The retailer was late to embrace online shopping. But it’s now making a bold wager on robotics.

LVMH Sales Surpass 2019 as Luxury Defies Pandemic Gloom
Apr 13, 2021
Revenue at the company’s fashion and leather goods unit jumped by 52 percent in the first quarter compared to a year earlier.

Hammerson in Talks to Sell U.K. Retail Parks to Brookfield
Apr 12, 2021
The company confirmed it was in discussions to sell seven properties to Brookfield for $479 million.

REITs End Quarter on a Roll, Posting Gains Across the Board in March
Apr 08, 2021
Retail, lodging/resort and apartment REITs posted the biggest gains in the first quarter.
Load More