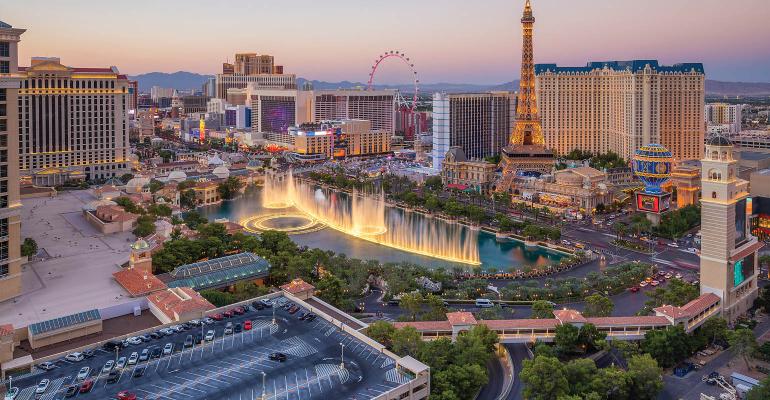 The gaming sector recently saw several mega-deals in Las Vegas. But the best risk-return properties might be far away from the Strip.

If Las Vegas were a playing card, it would be an ace, thanks to its stature in the gaming sector. But if you were to bet that Vegas collectively makes up the bulk of the revenue for the three publicly-traded gaming REITs, you’d lose.

Two recent high-stakes deals in Vegas deliver a one-two punch for the gaming sector: They spotlight the valuable gaming real estate along the Las Vegas Strip, and they shed light on the value of all gaming properties—including regional casinos outside Vegas.

Just two months earlier, in November, Blackstone Real Estate Income Trust wrapped up its $4.25 billion purchase of the real estate associated with MGM Resorts’ Bellagio hotel in Vegas. Now, MGM Resorts rents the property from the Blackstone REIT at an initial cost of $245 million a year.

So, while Vegas isn’t the only casino market for the gaming REITs and their emerging competitors, the MGM Grand/Mandalay Bay and Bellagio deals promise to up the ante for gaming real estate. Industry insiders say the two purchases should boost the value of gaming assets (at least those in Vegas), attract new entrants to the gaming market and lead to new joint ventures.

“I am convinced that the pricing premium achieved in the Bellagio transaction will cause the value of our real estate to increase as investors realize the fundamental growth, value and stability of the cash flows generated by our portfolio,” James Stewart, CEO of MGM Growth Properties, said during the REIT’s November earnings call. “The deal also highlights the robust market for high-quality Las Vegas Strip assets…”

Ed Pitoniak, CEO of New York City-based gaming REIT VICI Properties Inc., says the Blackstone REIT’s gamble on Vegas underscores the quality and scarcity of gaming real estate on the Strip, where the price of entry is enormously high.

“We like Las Vegas a lot. We think Las Vegas is a market that just gets stronger and stronger,” Pitoniak says. “It is a destination in which so many key elements that make a destination successful are in place.”

In fact, Pitoniak says he’d like to see VICI’s share of portfolio revenue from Vegas go up, adding that the REIT will pursue tempting opportunities that pop up on the Strip.

“Las Vegas is a top-tier global city for tourism and convention travel. It attracts and can handle big events like few other locations in the world, and the economics of Las Vegas gaming resorts are surpassed in global hospitality only by Disney’s theme parks,” Pitoniak says.

Nonetheless, Pitoniak and his gaming REIT rivals can hardly afford to overlook the pot of gold that is regional gaming. The regional gaming sector racked up revenue of $35 billion in 2018, according to data compiled by the advisory and consulting arm of Green Street Advisors LLC, a real estate research firm based in Newport Beach, Calif. That represents about 85 percent of total revenue for the U.S. commercial gaming sector in 2018.

VICI will likely always earn more of its rent from regional gaming assets than from Strip properties, according to Pitoniak, in part because of the “sheer supply” of regional assets and the room for growth outside Las Vegas.

Regardless of where gaming assets are located, Matthew Demchyk, senior vice president of investments at Wyomissing, Pa.-based gaming REIT Gaming and Leisure Properties Inc., says Blackstone’s rising stake in gaming real estate bodes well for his company, as well as for VICI and MGM Growth Properties.

“To the degree that institutional investors like Blackstone see an opportunity to put capital to work in this asset class, there may come a time where their only vehicle to do it efficiently and to do it at scale might be through some kind of joint venture with some of the legacy gaming REITs,” Demchyk says.

While Blackstone has firmly planted its gaming flag in Vegas, Demchyk and his colleagues at Gaming and Leisure Properties prefer regional gaming assets, because they historically deliver better risk-adjusted returns than their Vegas counterparts do. Properties on the Strip perform quite well in expansion cycles, he adds, but present more volatility in down cycles than regional properties do.

“Our mandate is to really avoid all downside. That’s what our investors want us to do,” Demchyk says.

That being said, he acknowledges Vegas casino hotels are “definitely great to look at” and enjoy “appealing attributes.” Gaming and Leisure Properties would pursue a Strip asset if it has attractive risk-adjusted returns. Las Vegas properties carry much higher operating costs than regional properties do, just as a high-end St. Regis resort in Kauai would when compared with a lower-cost Hampton Inn along a busy interstate, Demchyk notes.

Stewart, the MGM Growth Properties CEO, said a number of “fantastic” regional properties are scattered around the country.

“As we look across the whole landscape, we think that there are many, many regional assets where we think the cap rate should not only be the equivalent of a luxury Las Vegas resort like a Bellagio, but could potentially exceed it,” Stewart told Wall Street analysts.

According to John DeCree, equity research analyst at Las Vegas-based Union Gaming Group LLC, an investment bank that serves the gaming sector, the success of regional gaming in the U.S.—marked by rising revenue and a growing number of properties—constitutes a potential jackpot-like bonanza for REITs. Two of examples of that success:

“I think it’s interesting to note that REITs don’t need dozens of acquisitions to grow in the gaming sector, given the size, scale and value of casino resorts,” he adds. “For example, Bellagio’s valuation was $4.25 billion. In short, the opportunity is vast for gaming REITs to continue to grow.”