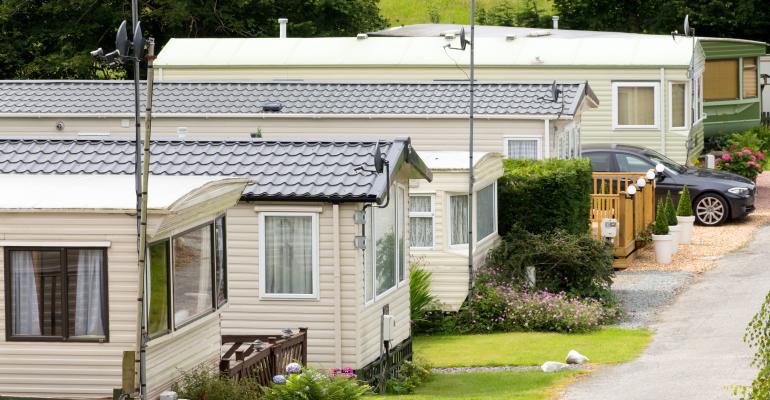 Evercore ISI analysts said in a note this month that they expect manufactured housing fundamentals to remain strong.

(Bloomberg)—Blackstone Group LP has made its first bet on manufactured housing by buying a portfolio of communities sold by Tricon Capital Group Inc., according to people with knowledge of the matter.

Tricon said this month it completed the sale of 14 manufactured housing communities for about $172 million to an institutional asset manager, without identifying the purchaser. A Blackstone representative declined to comment and a Tricon representative didn’t respond to requests for comment.

Manufactured housing communities are comprised of prefabricated homes often located near common facilities such as pools and recreation halls. This area of real estate is in favor with investors, in part because of the rising costs of homebuilding. The average price of a new manufactured home in the U.S. was $73,400, according to U.S. Census Bureau data that was last updated in February.

Blackstone isn’t the first institutional investor to dive into manufactured housing. Singapore’s sovereign wealth fund GIC Pte. in 2016 was part of a group that acquired a majority stake in YES! Communities.

Centerbridge Partners LP was an early investor in Carefree Communities Inc., which was acquired by Sun Communities Inc. in 2016. Apollo Global Management LLC owns a majority stake in Gold River, California-based Inspire Communities and Carlyle Group LP has also been active in the sector.

Evercore ISI analysts said in a note this month that they expect manufactured housing fundamentals to remain strong, with projected core same-store net operating income growth of 4 percent to 4.5 percent annually over the next three years, substantially above the 2.5 percent average growth the firm expects from U.S. real estate investment trusts.

Equity LifeStyle Properties Inc. and Sun Communities, two REITs with sizable exposure to manufactured housing, have both outperformed the Bloomberg U.S. REITs Index over the past 12 months.