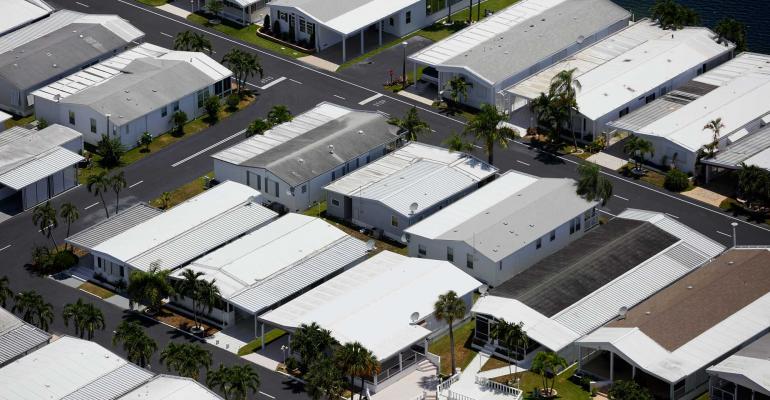 The firm is in negotiations to acquire about 40 mobile home parks, most in Florida, from Summit Communities.

(Bloomberg)—Blackstone Group Inc. is pouring more cash into mobile-home parks, a corner of the commercial real estate market that is holding up in the pandemic.

The alternative asset manager is in exclusive talks to acquire roughly 40 parks from Summit Communities for about $550 million, according to people with knowledge of the matter. The majority of the properties are located in Florida, said some of the people, who requested anonymity because the transaction isn’t public.

Real estate investment trust Sun Communities Inc. was among the bidders for the Summit portfolio, some of the people said.

Blackstone is set to make the investment through a vehicle known as Blackstone Real Estate Income Trust, or BREIT, and plans to spend money upgrading the properties, including shared facilities such as swimming pools, one of the people said.

“Though our investments in this asset class are very limited, we are proud to partner with a best in class operator and plan to invest significant capital into these communities – which are largely occupied by seasonal residents and retirees – to create high quality housing in places where people want to live,” a representative for Blackstone said in a statement.

The deal, which isn’t final and may still fall through, comes after Blackstone invested in mobile-home parks earlier this year. The New York firm paid around $200 million for seven parks, mostly in Florida and Arizona, owned by Legacy Communities, according to people familiar with that deal.

Representatives for Summit, Sun and Legacy didn’t immediately respond to requests for comment.

During the pandemic, transactions involving mobile-home parks have outpaced other corners of the commercial real estate market as investors steer clear of harder-hit sectors such as retail and hotels. More than $800 million worth of the properties changed hands in the second quarter, up 23% from a year earlier, according to a report from JLL.

Blackstone operates the properties -- also known as manufactured-housing communities -- through a platform known as Treehouse Communities that was co-founded by Dallas Tanner, the chief executive officer of Invitation Homes Inc., a former Blackstone holding.

The average price of a new manufactured home in the U.S. was $86,900, according to U.S. Census Bureau data that was last updated in April.

Blackstone made its first manufactured-housing bet in 2018, snapping up 14 communities sold by Tricon Capital Group Inc., Bloomberg reported at the time.

The firm owns less than 1% of the manufactured housing market.