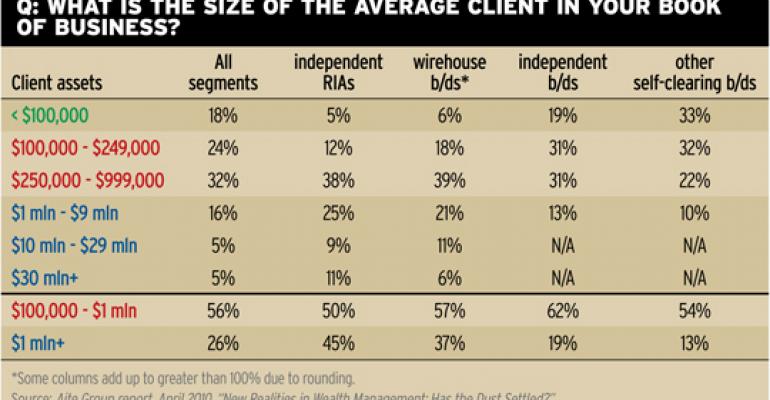 Not only are the independent RIAs stealing brokers and assets from the big Wall Street wirehouse firms, they also seem to have greater favor with the super-rich.

Not only are the independent RIAs stealing brokers and assets from the big Wall Street wirehouse firms, they also seem to have greater favor with the super-rich. According to an Aite Group survey of 402 financial advisors from the fourth quarter of 2009, independent RIAs have a greater share of high-net-worth (HNW) and ultra HNW clients than either wirehouse brokers or independent brokers. But the mass affluent own a greater share of the country's wealth. HNW clients, defined as those with assets of between $1 million and $10 million, represent 20 percent of retail advisory client assets, says the Aite report. Mass affluent clients, those with between $100,000 and $1 million in assets, represent 30 percent of all retail advisory client assets. Mass retail clients, those with fewer than $100,000 in assets, are a significant client segment for independent b/ds, but also for self-clearing b/ds outside the wirehouse space like Ameriprise and Edward Jones, the report says.