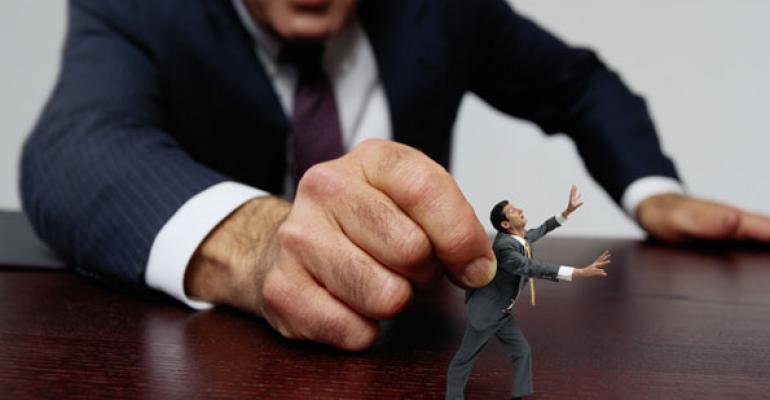 Critics say regulators set a higher bar for independent broker/dealers when it comes to supervising reps.

In recent months, both the SEC and FINRA have issued multiple warnings about the need to "pay close attention to independent reps in remote office locations."  They have also said they want to see more surprise exams at remote branches.

Securities attorney Alan M. Wolper, a partner at Ulmer & Berne LLP in Chicago, finds this troublesome.  He cites a case the SEC settled in January with 1st Discount Brokerage Inc., in Wellington, FL.  “They went after the firm and one of its executives over a $9 million Ponzi scheme run by one of the firm’s brokers,” he explains.  SEC enforcers said the independent contractor model that 1st Discount used  “requires greater supervision than that of a traditional wirehouse brokerage firm.”

Wolper fears this reflects a change in the SEC’s long-held stance. In a 1997 case against Royal Alliance Associates (now part of The Advisor Group, a netowrk of independent broker/dealers), the commission said independent offices merely “present greater supervisory challenges.”

“It’s one thing to say that a particular model presents greater challenges; it’s another completely to say that [it] should be held to a different, higher supervisory standard,” he explains.  “The standard must be the same for everyone,” he says.  “That’s the law.”

This is where he says regulators could run into trouble. “It is okay—and necessary—for them to issue interpretations of existing rules,” Wolper explains.  “But, when those interpretations go so far that they are, in essence, a new rule, they are unenforceable.”

Dodd McGough—an industry and compliance consultant who heads Austin-based Three Runs Consulting—agrees. “From my experience, the SEC has always, for some reason, been more concerned with independent firms with remote locations than even wirehouses that have some remote locations or satellite offices. Maybe it’s due to the independent contractor nature that enables advisors—with B/D approval—to be involved in outside businesses like insurance, benefits, accounting, etc.”  Still, he notes, fake mutual funds, Ponzi schemes and the like “have hardly been limited to independent firms.  Therefore, the Commission should ensure they diligently review the supervisory system of all B/Ds in a consistent manner.”

This is even more critical, says Philip Palaveev, president of Fusion Advisor Network, an independent financial planning group, “when you consider there that are as many—if not more—independent B/Ds as traditional firms.  It affects about half of all registered reps.

“My impression is that the large independents have been working pretty well with FINRA,” he says.  “This may be more of a challenge for the smaller firms.”

In January, John Derek Lane, who ran Lane Capital Markets LLC in Fairfield, Conn., settled with FINRA over the failed supervision of a remote independent office. FINRA alleged that Mr. Lane knew that the office was not being adequately overseen by a part-time financial operations principal.  He was fined $20,000 and suspended as principal of the firm for 30 days.

“Many independent branches don’t warrant, and cannot support, full-time operations managers,” says an independent branch office manager in the northeast who asked not to be identified.  “In this era of high technology, the notion that a remote branch office cannot effectively be monitored by its firm, and even requires greater oversight, due to this isolated incident, is simply ludicrous.”

Victor Shier, owner of Broker Dealer Services LLC, a compliance firm, says that, because of this, a number of very small and remote indie offices are falling by the wayside.  “They’ve been merging into larger companies because they don’t want to have deal with all of this compliance.”

The activities cited in the Lane case “were said to have begun in March 2008,” the branch manager continues.  “If the actions were so egregious—and if regulators were doing their jobs—why did it take so long for them to move on this?  Maybe FINRA needs to re-examine its own supervisory policies regarding which investigations are most needed.  Wasn’t ineffective supervision at the self-regulatory agency at the root of our industry’s unraveling several years ago?”

LOOKING MORE CLOSELY AT OUTSIDE BUSINESS

Regulators are also looking closer at outside business activities. FINRA Rule 3270, which went into effect in December 2010, requires reps to report prior written notice of any outside activity for which they have “a reasonable expectation of being paid.”  Under the old rule, only “prompt written notice” was required.

“Many independent representatives run other businesses, such as tax practices and investment advisory firms, so this rule also appears to have an extra impact on them,” Wolper says.

Shier agrees. “For reps who are employees of B/Ds, outside business is more of a hobby.  But, reps who are independent contractors frequently engage in outside activities, that are an important source of income for them,” he says. “So, we are looking at them more closely.  When we review them, we may ask to review a rep’s personal bank accounts and tax returns.”

Nevertheless, he says, the B/Ds are cognizant of the intrusiveness of this.  “We need to focus on issues that FINRA has noted as a deficiency in prior exams.  We’re asked to look signs of unauthorized activity.  But if we don’t see anything inappropriate, we typically don’t go any further.  Doing so has to be warranted.  And we only typically have three or four hours to do an audit.  So, instead of ruminating over personnel files, if nothing looks suspicious, we may move onto advertising files, etc.”

“We used to do surprise audits which weren’t total surprises,” Shier says.  “We could let people know we were coming the night before.  But, over the last year, we haven’t been able to do that.”  He says about 10 percent of the audits he perform are surprises.

“Over the last seven years, I’ve interviewed about 1,000 reps,” Shier says.  “Most are registered with large independents.  When I ask them if they’ve been audited by FINRA or any other regulator over the last six years, they almost always say no.  And, they don’t get many visits from the home office.  So, often, an audit is warranted—as well as being required by regulators.”

Wolper admits that pre-announced exams can give people the opportunity to cover up wrong-doing,  “Nevertheless, with all of today’s technology, if a broker is intent on selling away, he/she will likely get away with it by using private e-mails and cell phone numbers, etc.,” he says.

McGough agrees, noting it doesn’t matter “if a rep is in a 50-producer branch office or an independent advisor working from his home.”

Wolper suggests that B/Ds protect themselves by emulating the regulators, doing surprise audits on their own and increasing the frequency of on-site exams. “Don’t take a-one-size-fits-all strategy to branch exams,” he cautions.  Just like the regulators do, “They should be based on risk profiles with some offices subsequently getting more scrutiny than others.”