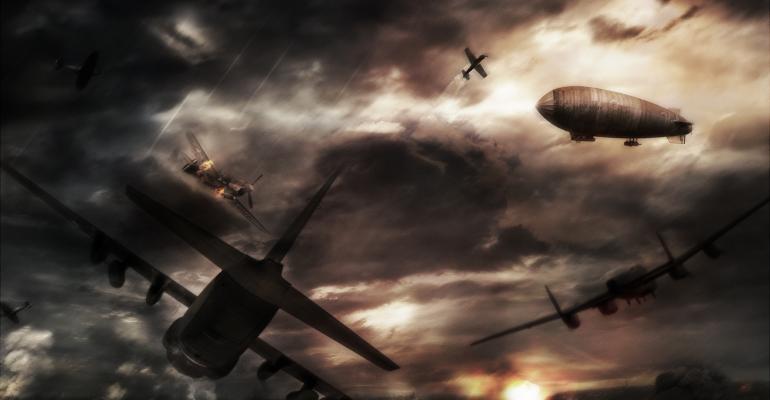 Moving to another firm can be like entering a war zone—the biggest threat being client casualties. The most successful firms are those that help advisors hang on to clients through the transition.

Advisors David O’Block and Ed Opat had just started the process of moving their practice from LPL Financial to Cambridge Investment Research when one of their assistants, a central player on their transition team, abruptly left the firm to be a stay-at-home mom. That put the Murrysville, Pa., advisors in a bind.

“She was the primary person that had gone through a lot of the classes, the online training, etc.,” Opat says. “We were short on our crack staff, and we had to end up doing a lot of things on our own.”

Turns out, there was a lot to do. Their firm, Equity Advisor Group, had well over 1,000 clients who had to be repapered, one by one. As when any advisor moves to a new firm, each client had to be contacted and convinced to open a new brokerage account with the new firm by filling out an Automated Customer Account Transfer Service (ACATS) form, as well as other layers of paperwork.

While recruiting firms tout their best-in-class technology, platform integration, compliance assistance and practice management tools, the real secret weapon to winning over advisors may be helping ensure that clients will be coming with their advisors.

Cambridge immediately sent two people to Equity Advisor Group to help. Ninety days later, O’Block and Opat transferred over 97 percent of their clients’ assets. They now have over $100 million in AUM.

This process used to be easier: Advisors were able to simply notify clients they were switching firms and, except for those clients who proactively opted out, the accounts were transferred en bloc. But in 2004, the NASD, now FINRA, said that negative response letters could only be used if issued by the transferring firm.

“Reps are scared to death that they’re not going to get all their clients switched over,” says Jonathan Henschen, president of the recruiting firm Henschen & Associates in Marine on St. Croix, Minn. “If you’re moving and losing a third of your book, what-have-you, then you’re having to rebuild. And they don’t want to do that. They want to move what they have and build on top of that.”

If You Leave, Will They (Really) Come?

Many advisors underestimate the complexity of moving over their book of business. The median advisor transferring firms retain between half and three-quarters of clients; only 4 percent keep 100 percent, according to an Aite Group survey of advisors who had transitioned within the last ten years. One-third of advisors admitted that retaining clients was a challenge; an equal number retained less than half their book.

Those numbers were top of mind for financial advisor Leasha Flammio-Watson in Melbourne, Fla.,

who jumped from Wells Fargo Advisors to Ameriprise Financial in March.

“Transition support was definitely one of the top two qualifiers because moving your book from one firm to another is like entering a war zone,” she says. “You’re battling other advisors—some of which you’ve considered friends—for your client relationships. So the more people you have on your side and protecting you, the better your transition will be.”

Flammio-Watson was wary of firms that would simply pull a pre-made transition plan off the shelf. She wanted a firm that would customize the process, and put boots on the ground—including a few pairs in her office.

For her first week with the firm, she had a team of four from Ameriprise sharing her workspace and going through her protocol spreadsheets with a fine-tooth comb, freeing her up to hit the phones. She left Wells Fargo with $85 million in assets, and 90 days later, held onto 90 percent of it.

“In all of the other firms I spoke to, no one was willing to give me that kind of manpower,” Flammio-Watson said.

While the notion exists that clients are loyal to advisors, not firms, successful client transitions are not always a given. Clients are stickier these days, especially at the bank-owned firms, says Ron Edde, president and director of recruiting at Millennium Career Advisors.

“A client often has their mortgage there; they’ve got their checking account there. And because of those relationships with the firm, the company stationery becomes almost as important as the advisor,” he says.

An Ace Up the B/D Sleeve

“The most successful financial firms right now, in the area of recruiting, are emphasizing investment in transition resources to assist advisors in bringing their clients over, both in logistics and in actual boots-on-the-ground support,” says Edde.

Ameriprise, for example, is in the top 10 firms with the most recruits for the first seven months of 2013, with 212 new advisors, according to Meridian-IQ. It also brings over a weighted average of 90 percent of client assets per advisor.

One way it does this is by offering incentives not just to the advisor, but to the transition staff. If the advisor hits certain milestones in bringing his or her book over, the firm’s field leaders—branch managers or field vice presidents—are rewarded too.

Ameriprise employs a transition team of 16 people who go out in the field and serve as an advisor’s support desk, says Manish Dave, senior vice president of business development. The team goes through a 250-step checklist, beginning before the advisor officially joins Ameriprise.

Cambridge also has had a good recruitment year, attracting 186 new advisors and $37.5 million to its platform.

Cambridge asseses where the advisor is coming from, and creates a customized plan, says Amy Webber, president and chief operating officer.

Advisors who joined the firm in 2013 had a combined $950 million in client assets before their transitions. Today, that figure is slightly over $1 billion (taking into account market appreciation of assets that came over in a transition), says Kyle Selberg, senior vice president of business development at Cambridge.

Prospera is also known for its transition process. The Texas-based IBD recently launched an online program for advisors going independent, says Tarah Carlow, vice president of marketing and new business development. The program takes advisors through a checklist of items to accomplish during the process.

The firm will fill out all the necessary paperwork—ACATS forms, fee-based business forms, direct business forms—and either send it to the advisor’s office or directly to the clients. For the first week or two, the firm also sends one or two home-office employees to the advisor’s office. On average, Prospera recruits retain 80 percent of client AUM.

“Every single practice we’ve talked to has a fear of transition,” Carlow adds. “And rightly so; it’s starting over in many cases.” 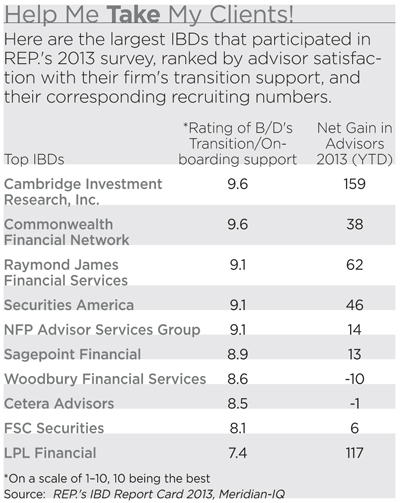