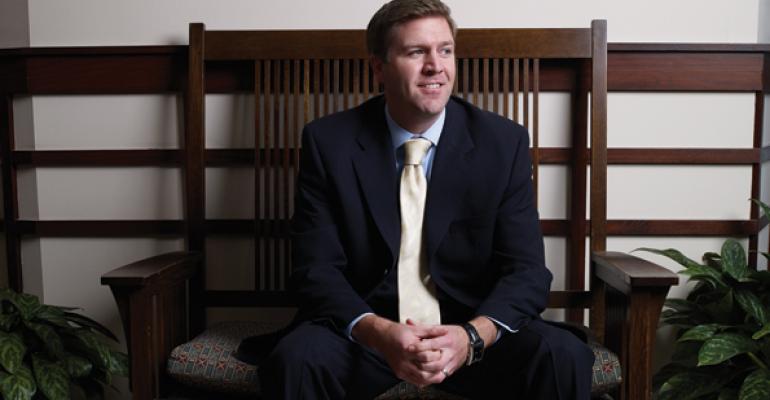 If You Can’t Build It, Buy It

Buying a practice at a young age is difficult, but if this advisor is any indication, it can be done.

After graduating with a finance degree and completing an internship at Merrill Lynch, Matthew Gulbransen joined Morgan Stanley’s advisor training program. But he began to feel that the education was leaving him ill-prepared to do the exact thing he’d need to do to be successful at Morgan Stanley—attract high-level clients.

“I just realized as someone who was 22, 23 years old at the time that it’s pretty hard to go out and attract $1 million clients right off the bat, and that’s really what Morgan Stanley wanted us to be doing,” he says.

He left the program and joined a local community bank in the Twin Cities area of Minnesota. He hoped the move would put him in front of more prospects as the bank had referral programs in place. “I could build relationships with bankers that would make those introductions for me, make them more of a warm lead instead of me doing it with no relationship at all.”

And it worked—to a point. Over seven and a half years there he built up a $63 million book of business, but began to plateau. He felt he had tapped out the local market. Longer term, he wanted the freedom to grow his own practice.

But rather than going out on his own and starting a firm from scratch, 31-year-old Gulbransen decided buying a firm was the better way to jump start his career.

Many advisors are thinking this way; wouldn’t it be better to buy an existing book of business than go through the years of scratching for each and every client?

“There are so many hurdles and barriers to entry these days—whether it be restrictions on cold calling or just the ability to get going as a young advisor all on your own—that there are fewer advisors going in,” says Tom Karsten, president and chief investment officer of Texas-based Karsten Advisors.

But it’s not easy as it sounds. There are more buyers than sellers in the marketplace. It can be difficult to come to an agreement on a firm’s valuation, and there’s also the issue of securing financing for the deal.

At the same time, as more and more advisors reach retirement age, some say there is a growing pool of businesses just waiting to be acquired, and it’s a strategy that will become more common. Karsten, 44, has grown his practice into a $250 million business through nine acquisitions over the last 13 years.

“It is a little unusual to see an advisor break away and acquire a business all in one fell swoop,” says David DeVoe, an M&A consultant with DeVoe & Co. “But it’s something I expect we may see more of in the future. The reality is we have a demographic tilt toward advisors moving toward retirement.”

In fact nearly a quarter of all advisors are going to exit the business within the next decade, says Kim Dellarocca, head of practice management and director of segment marketing at Pershing. In a January poll of 350 advisors, Pershing found that about a third would prefer to sell their businesses to the next generation of advisors, rather than to a bank, a serial buyer or other.

“Young people are really the pool that we all need to develop,” Dellarocca says.

“If I could find a practice that I actually thought had good processes, good people, good systems—basically everything set up where I can just come in and plug in—I probably can’t even measure the amount of time that it was going to save me,” Gulbransen says.

Gulbransen put the word out a couple years ago that he was looking to acquire. During the process, he met with five or six advisors, but most weren’t ready to sell.

During the three years of planning and meeting with prospective sellers that he found through local recruiters and networking with other advisors, he was met sixty-year-old Robert Callahan, the owner of Callahan Financial Planning Corporation in Woodbury, Minn., through a regional director at his RIA. They were on each others radar for two years before deciding to enter into a transaction.

Callahan has about $75 million in assets, bringing Gulbransen’s total to $110 million. Callahan will stay on for two years as clients transition over. The two have a wait-and-see approach as to what will happen after that. Callahan may retire, or he may stick around longer either feels the business needs it.

Of course, not all young advisors are as lucky as Gulbransen in finding an advisor willing to sell. The reality is, only 8 to 10 percent of advisors in the independent space actually sell their practice, according to David Grau, president and founder of FP Transitions.

“The sellers are married to the income stream, and they like what they do,” Grau says. “And frankly, when they’re 60 years old, they don’t work that hard at doing it.”

The competition is tight. Succession Link, a site that connects buying and selling advisors, has about 70 registered sellers, compared to over 1,000 registered buyers.

“I think everybody has the pipe dream of making an acquisition as a way to grow their business,” says Securities America’s Verboon. “There are not many for sale because it’s an easy business for people to stay in well into their 70s. They’re not digging trenches.”

In addition, it’s tough for younger advisors to get the attention of older advisors, says Phillip Flakes, manager and co-founder of Succession Link. He remembers one independent b/d advisor in his early 30s who approached a selling advisor on the site and met with him face to face.

“Bottom line, selling advisor just said, ‘You look too young,’” Flakes says. “And his client base, he felt it wouldn’t be a good fit for his client base.”

Perhaps the most difficult hurdle Gulbransen had to overcome was getting capital. Traditional lenders, such as Small Business Administration lenders, generally frown on putting up money to help close the purchase of a financial practice, since the practice’s value is in its cash flow and the goodwill of its clients—not the more tangible collateral that usually support these types of business loans.

And advisor practices aren’t cheap. In 2012, the average advisor firm sold for 2.35 times trailing 12-month revenue; some were as high as 2.98 times revenue, according to FP Transitions. (See chart.) That means larger practices are most likely not affordable for younger advisors just starting out in the business.

“Once you move over $250 million, $300 million, the value of your company can be so high that it becomes a challenge if not impossible for even several junior folks to be able to afford you,” DeVoe says.

The average buyer will be two to three times the size of the seller, says Grau. Typically, a buyer will pay a third of the total purchase price in cash at closing, and non-refundable, Grau said. The balance is usually seller-financed over the course of about four years.

Gulbransen took a different tack. He says he probably paid a little more than the other advisors who were interested, but he spread it out over a longer period than average. He put down 25 percent up front—via financing from a local professional practice bank; after a year, the balance will start to be paid out through a series of promissory notes and earn-outs for the next seven years; the balance is based on an agreed-upon metric, which, in this case, was client retention and growth of assets under management—this can help ensure the seller is incentivized to help the transition.

“Obviously I don’t want to come in and have negative cash flow on something I’m buying.”

Gulbransen’s loan from the Private Bank Minnesota for the downpayment was secured through an agreement with his RIA, AdvisorNet Wealth Management. The fees that Gulbransen earns in his RIA business are in part held in escrow for the loan payments.

Some independent broker/dealers will help their advisors finance an acquisition, which can make the process easier. Securities America, for example, offers loans to advisors with at least $150,000 in revenue, says Roger Verboon, director of practice succession and acquisition.

There’s also the matter of agreeing on the valuation of the firm. Gulbransen says he bought the firm for 2.15 times trailing 12-month revenue, a figure the two advisors arrived at from a combination of FP Transitions’ valuation and his own due diligence.

What made the firm more attractive was the fact that 85 percent of the assets are fee-based, a more steady, recurring source of revenue. It was also appealing that 75 clients account for 80 percent of the revenue, and most of Callahan’s clients are on the cusp of retirement—with an average age of 57—versus a more seasoned client base in their 80s, where you might see more turnover, Gulbransen says. This way, his client seems relatively secure for the next few decades.

“It’s difficult to find a practice; it’s difficult to do it as a younger advisor, when most people don’t have the capital yet, as most younger people like myself have spent all their capital trying to build a client base,” he says. “It can be done.”