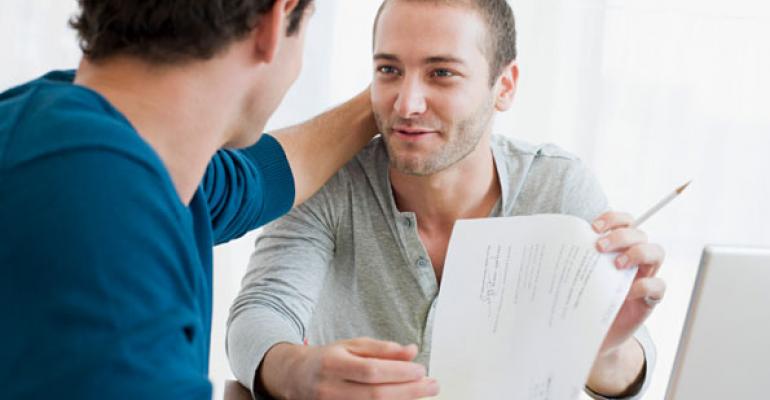 How to Financially Advise Unmarried Couples

It may not have the same academic heft as other acronyms that advisors flaunt on their business cards, but a professional designation aimed at financial issues involving domestic partners is getting more notice.

The Accredited Domestic Partnership Advisor program offered by the College of Financial Planning is seeing a modest uptick in awarded designations, a year and a half after the program was made available to FAs, the school says.

So far this year 53 advisors have completed the course work and passed a final exam, compared to 68 in all of 2011 and 78 in 2010, said Christopher Allen, the college’s director of marketing.

The college started the program in the fall of 2009 after it was approached by Wachovia, later acquired by Wells Fargo, to produce instruction for its advisors that addressed the planning needs of gay, lesbian, bisexual and transgendered clients, and unmarried heterosexual couples.

Marriage gives special rights to couples that are not afforded to those outside that arrangement, says Gregg Parish, a professor of estate planning at the college who prepared the ADPA curriculum. Those rights include the ability of surviving spouses to collect Social Security payments earned by the deceased.

The limitations were reinforced by the Defense of Marriage Act approved in 1996, which denies federal recognition of gay marriage, Parish adds. “It was a wooden door; now it’s a steel door,” he says. (On Friday a federal judge struck down the law, the second to do so this year.)

Domestic partners lose in other ways. They don’t qualify for the marital deduction, which allows spouses to give assets to each other without being liable to gift tax penalties. On federal tax forms, they can only file as single or head of household. Some states restrict same-sex couples from adopting children, and domestic partners are not always appointed automatically as conservators or guardians without documents specifically designating such actions.

The rules are in constant flux; Parish says he recently finished the third revision of the ADPA curriculum.

Advisors “can never assume what they do for their married clients is going to apply to their domestic partner clients, particularly in the federal area,” Parish says.

The program is less demanding than others offered at the college, however. While most of the school’s programs have 10 to 12 modules, ADPA has just four, covering wealth transfer for domestic partners, federal tax issues, retirement planning and relationship issues, and planning for financial, medical and end of life needs.

Tuition is $585 for the entire program. Students may take 24 hours of on-line instruction for the program, or a self-study regimen that runs up to 75 hours. They have to pass a 50-question final after completing the four modules.

Parish says ADPA is “probably one of the easier” of the school’s offerings. The program doesn’t get into the myriad planning issues posed by the rules of the individual 50 states; advisors are expected to learn that information on their own, he says.

One 25-year advisor in an East Coast practice with both CFP and ADPA designations said she thought the latter’s material wasn’t much different from the former’s.

“It’s presented in a slightly different way,” she said. “I really think what the (ADPA) title does is it makes people in that community know that you understand their lifestyle. There’s so much fear of talking about lifestyle... I don’t think an awful lot of gay, lesbian, transgender or bi couples just want to walk into a brokerage firm or a bank and say, ‘Hi, I’m gay, this is my partner. Can you help me?’ ”

Margaret Moore, an advisor with Wells Fargo Advisors in Ann Arbor, Mich., was one of the original Wachovia advisors who took the pilot program when it was introduced in 2009.

Moore, who also has a CFP, found the ADPA instruction went deeper into certain issues. One area the college might consider for improving the program is to offer a continuing education course that focuses on recent changes in law; ADPA requires 16 hours of CE course work every two years.

“For me, it’s never been about judging people’s lifestyles. It’s about understanding very unique circumstances, regardless of who they love, what their sexual orientation is. As an advisor, it’s really important for me to have the skill sets to identify their issues,” Moore says.

The designation has helped with business at her team practice, which has more than $125 million in assets under management, Moore adds. She says the practice has brought in $4.75 million in new assets since she received the ADPA mark. They came from one new client and two existing relationships that brought in family and/or life partner assets.