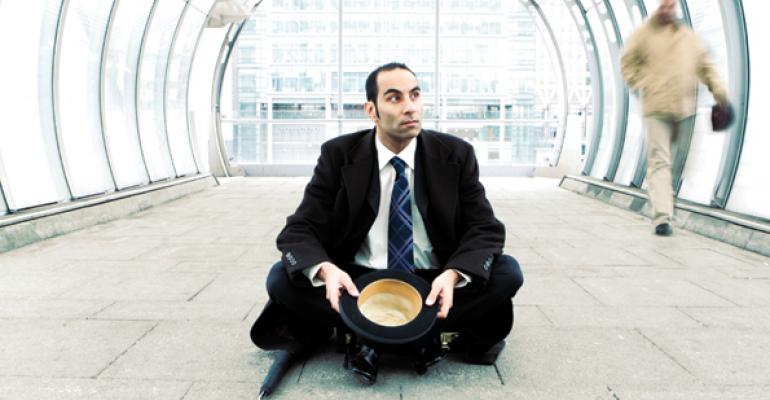 For most advisors looking to grow through acquisition, the thorniest issue is finding the cash to do so. Traditional lenders generally frown on putting up money to help close the purchase of a financial practice, since the practice’s value is in its cash flow and the goodwill of its clients—not the bricks and mortar that provide the far more tangible collateral for other types of business loans.

Broker Thomas J. Curtis recounts the struggle of trying to close on under $5 million in financing with a bank in the Tucson, Ariz., region that would allow him and a partner to buy the Raymond James Financial Services practice of a colleague. The two-and-a-half year process had the predictable twists and turns that accompany large lending applications, with the bank rejecting him at one point but six months later inviting him to reapply. The long slog ended in failure last winter when the bank turned him down a second time following an unfavorable appraisal.

“Purchasing a practice that doubles the size of your business is an extremely meaningful event in your life. And we spent two-and-a-half years feeling like we were one week away from closing…and then the rug gets pulled out from under you,” says Curtis.

The good news—in July, Curtis was able to close on financing with another bank, just within 45 days of applying. The bank understood their business better than the predecessor, he says. “’Buildings and equipment don’t make loan payments; cash flow makes loan payments,’” Curtis recalls the lending officer telling him. 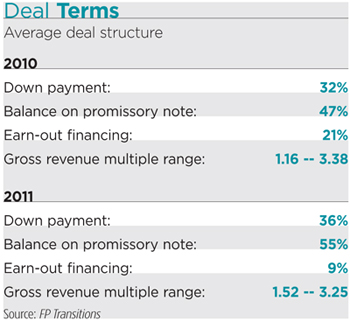 Borrowing to buy a financial practice may always be a trip on a long and winding road, but there are signs that the market is offering advisors some more help. This year two major custodians announced financial projects aimed at helping registered investment advisors carry out the lending needed for succession planning. In July Charles Schwab said that its Schwab Bank expected to make several such loans over the following six months as part of a new program aimed at seasoned practices: RIAs with assets under management of at least $400 million and with three or more principal partners. Meanwhile, TD Ameritrade Institutional is working on assembling a network of lenders for succession financing, a group that may include TD Bank. A launch is expected this fall.

Industry observers say custodians are heading in this direction as a defensive move to keep assets on their platform, rather than lose them to aggregators or other large RIAs whose growth has shaken up the industry in recent years. But Scott Slater, managing director for business consulting at Schwab Advisor Services, says his firm is just responding to demands from advisors as they work through issues surrounding practice succession. “We aren’t bringing an agenda to the equation,” he says. “We’re trying to be as objective as we can to help them think through what they want to do.”

The moves by the custodians are accompanied by signs of improving valuations of practices, a development that greases the lending skids. The average multiple of gross recurring revenue paid for independent financial service practices rose modestly last year to 2.33, up from 2.31 the preceding year, according to FP Transitions, which consults on practice sales. It noted that the valuations had risen in 11 of the past 12 years.

In addition, the firm says that sellers benefited from larger down payments and shorter earn-out periods, in which the seller collects the balance of what’s owed him over a set period of time. FP Transitions says the length of seller financing fell from 4.8 years in 2009 and 2010 to just 4.1 years in 2011 as a result of the bigger down payments. Revenue quality also is up. The ratio of average recurring to non-recurring revenue has risen from about 55/45 in 2003-2004 to 70/30 today, the firm says. (It based its data on 176 transactions it was involved in during 2011.)

“Despite the volatile economy in recent years, the value realized by owners of independent financial service practices has been strong and reliable,” said Brad Bueermann, FP Transitions’ executive vice president and principal, in a report earlier this year. “That’s good news for those thinking about retiring, and it is also good news for the buyers investing in these businesses.”

Retirement, coupled with cashing out, is on the minds of many advisors. Demographics is playing a role. Cerulli Associates says that half of all RIA advisors are age 50 or older, while 48 percent of independent broker/dealer advisors fall in that age bracket. Schwab’s annual benchmarking survey of RIAs last summer found that one out of seven advisors had succession planning or strategic planning as their top initiative for the year, up from one out of 10 in 2010. TD Ameritrade last year said its own survey found that the number of advisors who had a succession plan had risen 19 percentage points.

But wanting to sell a practice and finding buyers who are capable of closing the deal are two different things. Cerulli estimates that nearly 60 percent of advisors who are within five years of retiring expect to sell their business to an as-yet-unidentified buyer, a time frame that‘s woefully inadequate. And the manner in which the practice is managed can determine whether a lender will be interested in participating in a deal. So-called “lifestyle” practices, in which the advisor-owner draws most of the cash out annually rather than reinvest in the business, don’t have the management bench strength that lenders look for when evaluating the feasibility of financing. The advisor may own the business, but in another sense it’s the business that owns the advisor.

“The value of the business is inversely correlated to the importance of the lead advisor to the business,” says Matt Brinker, head of partner development and acquisitions at United Capital Financial Advisers, an RIA aggregator in Newport Beach, Calif. “He is the business. And that’s why I think you’re seeing these statistics of lack of succession planning within an industry that is planning-based, with very capable and intelligent and well-informed people who have retired thousands of their clients successfully—but you have to ask the question, ‘Why not them?’

“I can respect the fact that banks don’t loan on these businesses,” he says. “The banks are always preparing for doomsday. If the advisor doesn’t show up on that following Monday, the bank can write that loan down to zero because they can’t step in and hire somebody.”

For practices that do make the grade—with multiple advisors, several hundred million in AUM, and a client base of younger investors who want to grow assets, as opposed to retirees who are spending down their assets—lenders may be ready to take a fresh look at applications from advisors, some industry observers say. It‘s particularly true in a low-interest rate environment that’s producing marginal returns on fixed income investments.

Cash flow is considered a key measure of profitability in the advisory practice world; it’s typically measured as earnings before owners’ compensation, EBITDA, or some variation of the two. Brent Brodeski, chief executive at Savant Capital, an RIA based in Rockford, Ill., with $2.7 billion in AUM, says the collapse of housing values in recent years which damaged bank balance sheets has lenders taking a fresh look at the merits of lending on cash flow.“There are a whole lot of banks out there right now who have been aggressive asset-based lenders who are now seeing the wisdom of being cash-flow based, or at least diversifying their book,” Brodeski says.

Some banks are willing to lend if the Small Business Administration guarantees the loan, but the agency’s involvement can come with its own complications. The SBA will guarantee a portion of the financing on a practice acquisition, but not the full amount, says Curtis, the advisor who bought the practice in the Tucson area. And the SBA frowns on relationships between IBDs and their member practices that it sees as too restrictive, he adds; in those cases, the agency sees its guarantees as benefiting the IBD instead of the advisor who wants the loan. (Curtis says Raymond James worked with the SBA to document the independence of the broker’s relationship with the IBD to the agency’s satisfaction.)

Banks also want to look at tax returns at the practice for the previous four to five years, Curtis says. Such scrutiny gives the lenders a picture of how the business will perform in poor markets. Potential buyers need to know ahead of time whether a lender will offer financing based on cash flow, he says; there’s no point in coughing up a $2,500 application fee, a $3,000 appraisal fee, and other costs if the lender ultimately is unfamiliar with the basis for the practice’s profitability. He also recommends that potential buyers obtain their own appraisal of a practice before moving ahead; no one wants to be surprised by what the bank finds with its own.

Independent broker/dealers also will finance succession deals that keep assets inside their business. Patrick Jinks, director of practice planning and acquisitions at Raymond James Financial Services, says the company financed three deals last year and expects to do at least a dozen this year. Part of what’s driving the increase is anticipated changes in tax rules at the end of the year with the phase-out of the Bush-era tax cuts. Raymond James has kept its powder dry. “I wouldn’t say I have an unlimited checkbook, but I don’t see capital as being a constraint at this moment,” he says.

Practice sales typically have multiple components: the down payment (up to 50 percent of the purchase price, Jinks says), a note held by the seller for the balance (for a fixed amount, or contingent on an adjusted value after a period of time), and perhaps an earn-out, in which the balance due to the seller is based on an agreed-upon metric, such as a percentage of profits over a period of time. In 95 percent of the deals he’s seen in the industry, Jinks says sellers take notes from buyers.

Flexibility can help in designing financing deals. A Raymond James Financial Services advisor who was looking to sell his business to a team from another IBD persuaded them to join Raymond James this year with financing help from the company. The buyers used the cash that the brokerage offered them as a transition incentive, along with their personal funds, to help pay the 50 percent down payment; Raymond James also offered the buyers financing on a portion of the down payment that allowed the buyers to make interest-only payments during a portion of the term of the loan. The buyers said it helped with their transition. Some of their team members were new to the business and weren’t expected to make a strong contribution to the practice’s production immediately after the takeover. The provision “helped us get our feet underneath us,” one of the buyers said.

Ultimately, success in practice succession may have nothing to do with financing. Larger firms are looking at ways of setting up long-term structures, such as stock-grant programs that provide equity for junior partners who may want to take over the firm in 10 or 20 years. Those programs require long time horizons and no small amount of planning on the part of the practice owners, says John Furey, principal and founder of Advisor Growth Strategies, a consultancy.

“If you’re a firm where the principals are 45 to 50, they need to think about succession planning now. If they don’t, when it gets toward the end, they can limit their own options because of lack of financing, lack of an internal successor …Nobody knows what’s going to be available for sale options in the future. Are you going to sell to a holding company or a rollup?” Furey says. “Everyone says we need financing to get a deal done. But the savviest advisors should be in a spot where they never needed financing to begin with.”