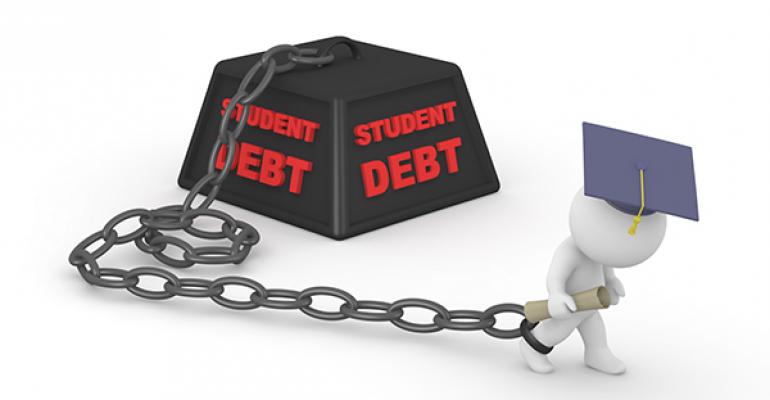 Firms interested in attracting and retaining young talent may want to reconsider the basics of health, dental, vision and retirement benefits. Adding student loan repayment options to employee benefits can be a significant draw for new-to-the-industry advisors, and with new tools and stats backing up their attractiveness, there are fewer reasons not to at least consider adding this perk.

While advisors are getting more tools to help their clients pay off student loans, young advisors are sometimes facing daunting loans of their own. By the end of 2018, student loan debt had doubled since the last recession, adding up to just shy of $1.5 trillion. Financial advisor Christopher Haigh recently wrote about his own experience with student debt, which he said came to $77,000, and how an initial misstep led to years of additional expenses.

But new tools and a growing awareness of the benefits a company could provide to its employees are leading to some solutions. While last year only 4 percent of employers contributed to student loan repayments, in two years that figure is expected to grow to 32 percent, according to a 2018 report. Y Combinator-based Goodly recently raised $1.3 million in seed funding to simplify the benefits sign-up process of allowing companies to pay off employees’ student loans, according to a TechCrunch report. The automated system costs participant employees $6 per month and has seen an adoption of up to 40 percent, said the company. Employees get a dashboard that helps them track their debt. First Republic’s Gradifi also offers a direct contribution option to help employers pay off their employees’ student loans. Haigh uses the advisor-focused loan analytics firm Payitoff to manage his student loans.

Wealth management firms eager for fresh talent should be paying close attention to employee perks like student loan repayment offerings, said Kate Healy, managing director, Generation Next at TD Ameritrade Institutional. “When we think of the talent shortage in our industry, firms have to be looking at their total benefits package and they've got to look at it from a health and wellness perspective,” she said. “I think student loan debt repayment is going to become one of those options that the best companies have to be able to offer to attract that talent.”

Paying off debt is associated with positive impacts on health and life, respectively, according to a Fidelity survey conducted in conjunction with the Stanford Center on Longevity. “Paying off debt ranked as one of the most positive life events with respect to overall well-being—in fact, it was rated just as impactful as starting to exercise,” according to the report.

There’s an element of balance and fairness, though. “You have to be careful that you don't look like you're giving more benefits to people who are paying off student loan debt. What happens to people that didn't have student loan debt?” she asked. “Some people don't care about student loan debt, but they would might want more PTO or something like that.” She also suggested firms look at providing scholarships at local colleges and universities or create a summer internship program, or even supporting a young advisor with funds or study time while he or she completes the CFP exam.

Some larger financial services firms have already started offering certain employees with those benefits. Fidelity had more than 25 percent of its workforce sign up for a student loan repayment benefit, according to an NPR report. The three-year-old program pays up to $10,000 over five years. Prudential Financial offered up to $5,000 in student loan repayment funds to campus recruits who join the company after January 1, 2017, after those employees completed one year of employment. The catch, however, is that the company’s advisors aren’t often sourced from the campus recruitment program, according to a company spokesperson.

Besides attracting recruits, retaining top talent is easier with a student loan repayment benefit, according to a small but widely referenced survey conducted by the American Student Assistance nonprofit. It found that almost nine of every ten employees would commit to a company for five years if the employer helped pay back student loans.

"It's not just the advisory industry that has a lot of people in the boomer age that are going to start to retire," added Healy. "It's important for advisors to absolutely pay attention to cutting edge benefits." For an industry famous for wringing its hands about the age of its advisors and a lack of young talent, maybe student loan repayment assistance is the benefit that could turn those well-worn worries around.