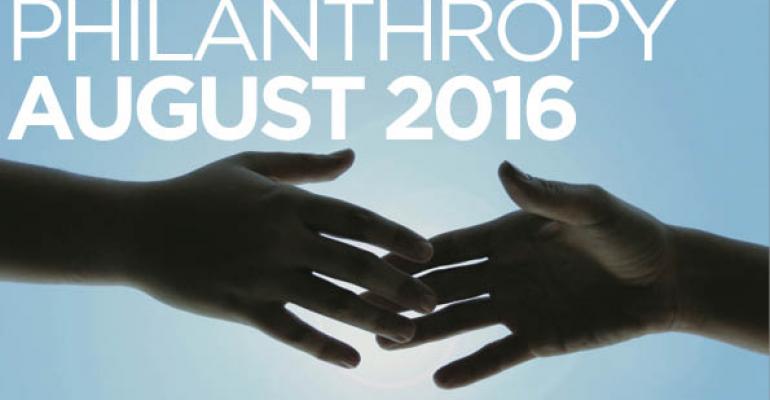 The Legacy IRA Act: The Devil Lurks in The Details

The Protecting Americans from Tax Hikes Act of 2015 (PATH) represented the successful culmination of efforts to make permanent the provision that allows individuals over age 70½ to make tax-free distributions to qualified charities from a traditional or Roth individual retirement account in amounts up to $100,000 per year.

The Legacy IRA Act (H.R. 5171) represents an attempt to extend the benefit of the charitable rollover to split-interest charitable income gifts, such as charitable remainder trusts (CRTs) and charitable gift annuities (CGAs). Its modest revenue losses over its proposed effective date indicates that Congress doesn’t expect wide use of this provision.1 The average annualized revenue loss over 10 years is approximately $10 million. That represents about 1.3 percent of the 5-year average estimated cost of the direct gifts from IRAs for fiscal year 2016 to fiscal year 2020.2 The modest revenue losses enhance its chances of enactment.

How the Legacy IRA Act Works

The legislation enables IRA owners 65 years or older to transfer up to $400,000 annually for the funding of immediate payment CRTs and CGAs. IRA owners
70 years or older could continue to transfer $100,000 outright counting against their annual limit of $400,000. Both outright transfers from an IRA and the funding of a life income gift count against the required minimum distribution (RMD) requirements. While the donor doesn’t receive a charitable deduction, there’s no increase in his income. Taxpayers who don’t itemize or those who do but have their charitable deductions curtailed by the Pease limitation or experience reductions in other exemptions and/or credits as adjusted gross income increases will experience the greatest benefits from the Legacy IRA Act. Those seeking to control the timing of their income through a deferred CGA or the timing and composition of their income through a net income only unitrust or net income with makeup unitrust will need to fund those gifts using assets other than an IRA.

Here’s how the charitable life income gift rollover differs from the outright charitable rollover and contains a trap for the poorly advised. I believe the options for the funding of a split-interest charitable gift under current law may be good, if not better, for the oldest donors rather than making use of the provisions of the proposed law, should it be enacted.

The gift planner and donor should bear in mind three considerations when determining the most effective strategy for funding a life income gift.

First, for donors between the ages of 65 and 68, the Legacy IRA Act payout (legacy payout) withdrawal rate exceeds the recommended annuity rate of the American Council on Gift Annuities (ACGA). Each charity will need to decide whether the economics of a trust paying 5 percent are appropriate for the organization. To the extent the cash-strapped donor is drawing down funds from an IRA, the tax-deferred buildup has been diminished. But, that may well be a price the donor is willing to incur.

Second, the minimum trust payout rate of 5 percent is greater than the RMD percentages for donors age 70 through 78. Thus, the donor must be aware that the Legacy IRA Act will be triggering both slightly higher income and the taxes attributable to it. That may well be a price the donor wishes to pay, though the charity and gift planner need to be sure the donor has been fully informed.

Third, the minimum legacy payout rate is less than the RMD percentages for ages 79 through 90. That is, if a donor 79 or older is willing to accept a payout rate less than the recommended ACGA rate, the donor should have a smaller inclusion into gross income. Of course, most funders of a CGA are doing so to improve and ideally maximize their income during the retirement. Nonetheless, advisors will need to point out this tax minimization opportunity. (For a comparison of the payout rates, see “Payout Rate Comparison,” p. 9.)

The most impactful trap for the unwary involves the inability of the donor to recover his basis for the funding of a charitable gift annuity.

Under the Legacy IRA Act, Internal Revenue Code Section 408(d) would be amended to state “Qualified charitable distributions made for a gift annuity shall not be treated as an investment in the contract for purposes of section 72(c).” This inability to recover basis should compel the examination of the conventional wisdom that the Legacy IRA Act will actually be preferable to funding a gift annuity from an IRA under current law.

Let’s compare the results of a CGA being fully taxable for a donor age 79 under current law with funding a CGA under the proposed law. “Which is Preferable?” this page, shows that, during the 10 years of the donor’s life expectancy, his after-tax income is about 32 percent greater if he doesn’t use the provisions of the Legacy IRA Act. Specifically, under the Legacy IRA Act, the annuity payment of $6,600 would be reduced by income taxes of $1,848 for a taxpayer in the 28 percent bracket, as no recovery of basis is permitted. By funding the CGA with taxable distributions from the IRA under current law, only when the donor reaches his life expectancy will the payments be fully taxed. 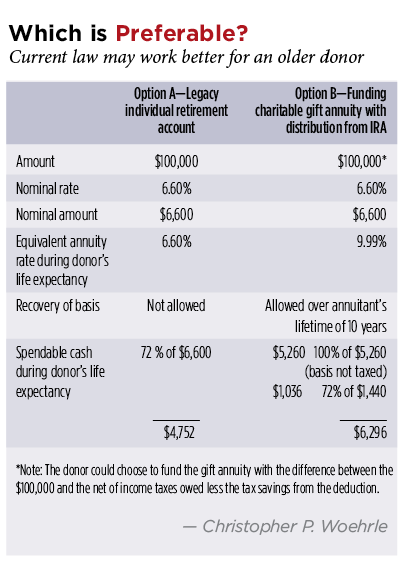 For those charitably inclined, having less spendable income under a CGA funded through a rollover IRA might be acceptable. But, advisors have a duty to inform their clients that the current law provides a way to improve income notwithstanding that funds coming from the IRA will be fully taxable. Remember the contribution funding the CGA not only will be tax deductible, but also, its income will be partially tax-exempt.

If passed, the Legacy IRA Act understandably will generate considerable interest among charities, advisors and donors. For the middle market donor, the legislation may well be a solution to the need for more spendable cash. But, a donor’s advisor should also analyze funding a CGA from an IRA as already permitted under existing law. For a donor seeking to control the timing of the commencement and tax character of distributions, the Legacy IRA Act won’t be a viable option.