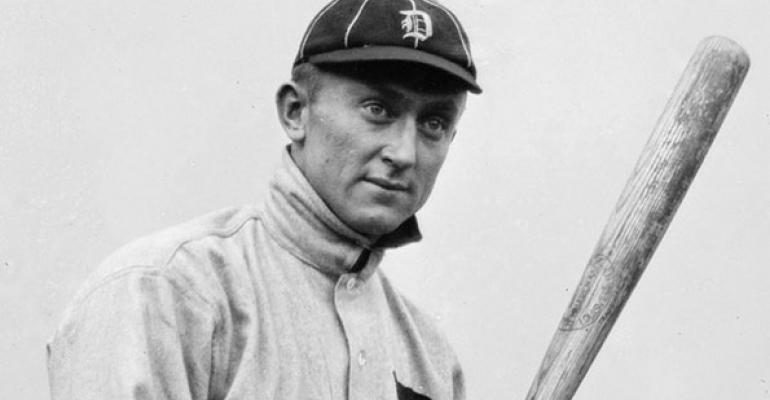 Advisors can learn a lesson from his contradictions

Ty Cobb’s known for ruthlessness both on and off the baseball field; less well known is his philanthropy, which over the last 60 years has enabled thousands of Georgians to attend college and graduate school.

The “Georgia Peach” Ty Cobb (1886-1961) is one of baseball’s legends. A member of the first class inducted into the Baseball Hall of Fame, Cobb is widely credited with setting 90 major league baseball records during his career. Today, more than half a century after his death, his name often conjures up images of a vicious ballplayer who spiked his opponents and beat up the disabled.

Interestingly, long after he retired from baseball, he established a private foundation (PF) to which he dedicated much of his time and resources in the last decade of his life. His PF endures as a lasting legacy and, over the last 60 years, has awarded more than $15 million in non-athletic scholarships to thousands of Georgia residents. How this dichotomy came about is instructive to estate-planning advisors.

Cobb was reportedly the richest ballplayer of his time. During his early years as a Detroit Tiger, he became a shareholder in United Motors, which General Motors subsequently acquired. Later, Robert W. Woodruff, president of Coca-Cola, persuaded Cobb to invest in Coca-Cola.

Cobb’s first foray into significant philanthropy was in 1945 when he funded a hospital in his parents’ memory. For two years, he visited numerous hospitals before donating $100,000 to establish a 25-bed hospital in his hometown of Royston, Ga.

With the accomplishment of the hospital, he then turned, as he said, to doing “something along educational lines.” Again, his philanthropy was carefully thought out. For some time, he consulted with Dr. Daniel Elkins, professor of medicine and head of the Department of Surgery at Emory University School of Medicine in Atlanta. He recruited several other preeminent individuals, such as the Chancellor of the University System of Georgia, to be trustees of his PF. To this day, a majority of the trustees are prominent educators.

Cobb’s PF reflects two of his values. As someone who never attended college, he valued education. His father was a high school principal who wanted Cobb to attend college. Unfortunately, Cobb’s mother accidentally killed his father shortly before Cobb was called up by the Detroit Tigers, so his father never saw Cobb reach success. Cobb once commented that he thought baseball players should complete college before turning professional, and education was a value he impressed on his children. His son, Ty Jr., attended Princeton and Yale.

Cobb also wanted recipients to demonstrate a determination to succeed. For this reason, the scholarships were (and still are) awarded only to students who prove themselves by completing 30 semester hours with a 3.0 grade point average or better.

There are several lessons to be learned from Cobb’s philanthropic behavior. First is the importance of having values-based philanthropic conversations with all clients, regardless of how unlikely it may seem that they have such an interest. A 2013 survey by U.S. Trust of high-net-worth (HNW) individuals and their advisors, in partnership with The Philanthropic Initiative, reveals that many advisors don’t fully appreciate their client’s wishes to discuss charitable goals and passions and overvalue the importance of tax benefits as a motivation of giving.

The study finds that less than half of HNW clients are completely satisfied with the philanthropic conversations they have with their advisors. Richard D. Tyson, Jr., senior vice president of U.S. Trust, observes:

The timing of when to introduce the subject of philanthropy really has to do with the client. In a first meeting, an advisor (and ultimately the client) is best served when the advisor does more listening than talking. Listening to the client’s story helps identify clues to then find resources or solutions that a client may need to make their financial lives easier, and to achieve their goals. I have never regretted introducing the subject of philanthropy, even if it uncovers that there is no philanthropic intent on behalf of the client.

Carefully considered philanthropy allows your clients to leave a permanent legacy, and bequests are one way for your clients to have a larger impact than otherwise would be possible. Each bequest is a reflection of an individual’s values and life story. For Ty Cobb, it was education and perseverance. Do you know what’s important to your clients? Would this knowledge help you better advise them? The guidance that your clients are seeking isn’t limited to tax and finances, and professional advisors can play a role in helping their clients achieve their philanthropic objectives by initiating substantive conversations with them about the meaning of their lives and what’s most important to them and the legacy that they would like to leave.

This is an abbreviated version of the author’s article, “Unlikely Philanthropist,” in the October issue of Trusts & Estates.