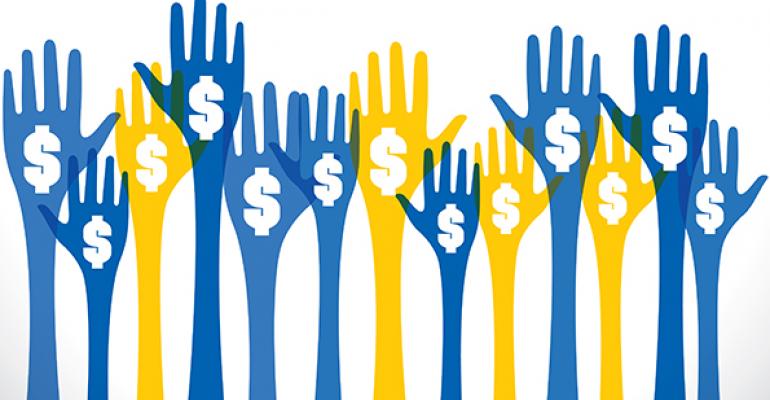 The Tax Advantages of Donor-Advised Funds

There is an increasingly-popular tool that allows clients to get more to their favorite charities, and less to the IRS

Usually clients wait until the last possible minute to consider any significant charitable giving for the year, assuming they do any planning at all. But developing a long-term approach for the right clients now can prevent a lot of subsequent year-end scrambling and save a sizable amount of taxes.

There is an increasingly-popular tool that allows clients to get more to their favorite charities, and less to the IRS.

Details of the DAF

The key component of the strategy is the use of a donor-advised fund (DAF). According to the National Philanthropic Trust, assets in donor-advised funds totaled $45 billion at the end of 2012, a 19 percent increase over 2011.

Clients can contribute cash or other assets to the DAF now and receive a tax deduction today based on the value of the contribution.

The money is invested in some combination of funds within the DAF, chosen by the client from a relatively limited menu provided by the DAF sponsor. Any future gains on the deposit are sheltered from taxation.

The client can recommend future distributions to qualified organizations, using his discretion to determine both timing, and amounts. The primary drawback to the DAF is that because of the big tax break offered upon deposit, future dispersals from the account do not provide another tax deduction.

The best candidates for this tactic will be those clients who are in a higher tax bracket now than they will likely be in a few years, and/or won’t have enough deductions to itemize in the future (thereby precluding the tax break for donating to a qualified charity).

For instance, it could be a high-income couple who will soon be entering retirement and consequently will have a lower level of taxable income. Or, it could be someone who is selling a business now and incurring an extraordinary taxable capital gain.

Another potential candidate would be an individual retirement account owner who wants to convert some or all of the account to a Roth IRA during the year in question and use the larger-than-usual tax deduction generated by the donation to the DAF to cancel out the additional taxes that would otherwise be owed.

It might also be a client who owns a stock or mutual fund outside of a retirement account and has an unrealized taxable gain that he or she would like to realize without paying the tax bill inherent upon selling.

Start by asking interested clients how much they typically give to qualified non-profits and charities in a given year. If they itemized their deductions, the amounts and recipients should be listed on their previous tax returns.

Then take that annual amount and multiply it for as many years as the clients are comfortable projecting forward—say, 10 years.

The next step is to show the clients how much they might realize in tax savings by accelerating their planned giving to a DAF now. Add in the prospect of offsetting the tax liability that would otherwise be incurred in the aforementioned situations, and they should be interested in moving forward.

To illustrate the potential benefits, you can use the planning software and online tools provided by several donor-advised fund sponsors, or try Fidelity’s Charitable Planning Calculator.

Their net tax advantage of this proposition is $6,500 over the next 10 years, and the charities in question would receive $50,000.

But if the clients instead donate the appreciated securities to a donor-advised fund in 2014, their tax savings this year would be $20,500—an increased savings of $14,000 over what they were planning to do, according to the Fidelity calculator.

They could then recommend that beginning in 2015, the DAF disburse $5,000 per year to the same qualified charities.

If the investments within the DAF earned a hypothetical annual rate of return of 5.4 percent, the Fidelity calculator says that the charities would receive a total of $74,669 from 2015 to 2029 before it was exhausted—nearly 50 percent more than what would have been given under the clients’ original intentions.

In some respects, the DAF provides even more flexibility than clients might initially anticipate. For instance, there is generally no mandated annual gift from the DAF, nor is there a predetermined minimum or limit on the amount.

Clients can also choose to contribute additional cash or assets to the DAF in future years, and receive any tax benefits available on the donation at the time.

There are drawbacks, including the inability to take the money back from the DAF once it is donated. And although the client can “advise” the DAF sponsor as to which charity should get a particular distribution, the sponsor may decline the transaction, especially if the charity in question does not meet the required qualifications.

In addition, to get a tax benefit for the 2014 tax year, the account has to be established and funded before the end of the year. So you’re better off talking to the appropriate clients sooner rather than later. If they need a little extra motivation to get started, you may want to point out how much more they would otherwise pay in taxes by April 15.