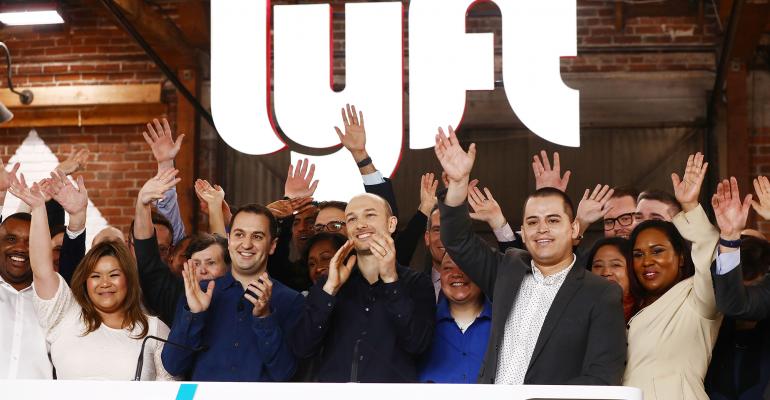 Lyft Founders to Give More Than 1.5 Million Shares to Donor Advised Fund

“Lyft is deeply committed to improving people’s lives socially, economically and environmentally,” a company spokeswoman said in a statement.

(Bloomberg) -- Lyft Inc.’s co-founders are donating more than 1.5 million shares of the company to the National Philanthropic Trust, one of the largest operators of donor advised funds, a controversial type of charity.

The founders, Logan Green and John Zimmer, are transferring some their class B shares, which have more voting rights, to class A common stock to make the donation. The move will leave their voting control of the company at 44.4%.

“Lyft is deeply committed to improving people’s lives socially, economically and environmentally,” a company spokeswoman said in a statement. The ride-hailing firm disclosed the transactions in regulatory filings on Thursday.

Donor advised funds -- a popular vehicle for Silicon Valley heavyweights -- have been criticized as “philanthropic fracking” for rich people. Often, donors will give to a donor advised fund, or DAF, shortly after a big payday. For example, when Facebook Inc. bought messaging platform WhatsApp, WhatsApp co-founders Jan Koum and Brian Acton put $846 million into a DAF, according to the New York Times. Nick Woodman, founder of GoPro Inc., made a similar move after his company’s initial public offering, the newspaper reported.

The structure offers donors advantages over private foundations, including an immediate tax writeoff, even if the money in the fund is not immediately given to other charities. When giving securities to private foundations, the income-tax deduction is capped at 20% of the person's adjusted gross income. If instead the securities are contributed to a DAF, the income tax deduction is capped at 30%. Since the DAF is a public charity, the donor pays no capital gains tax -- and neither does the DAF when it sells the asset.

“If they haven’t yet recognized the capital gains on these securities, then they will have significant tax benefits by giving this stock to a DAF,” said Ray Madoff, director of the Forum on Philanthropy and the Public Good at Boston College Law School.

The real problem with DAFs is that they benefit from preferential rules that are supposed to apply only when funds are truly available for use by a public charity, she explained. Donors, like Green and Zimmer, retain advisory privileges, which means the funds are effectively not available for charitable use until they release these privileges or make transfers out of the DAF, she added.

“DAFs are an end-run around the rules,” Madoff said. “It’s not about bad people, it’s about bad policies that don’t create the right incentives.”

To contact the author of this story:
Eric Newcomer in New York at [email protected]

To contact the editor responsible for this story:
Anne VanderMey at [email protected]
Alistair Barr