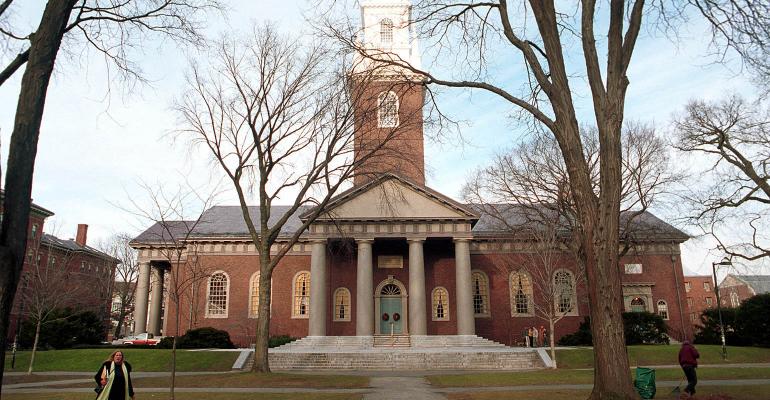 Harvard's take was the most by an U.S. university, which collectively took in $41 billion in 2016.

(Bloomberg) -- Harvard University raised $1.2 billion from donations, a record for the world’s richest college. The haul was erased by $2 billion in investment losses and spending.

Harvard’s take was the most by any U.S. university as colleges collected an unprecedented $41 billion in fiscal 2016, the New York-based Council for Aid to Education, which tracks university giving, said in a survey released Tuesday. Stanford University was ranked No. 2, with $951 million, marking only the second time in 12 years that Stanford failed to outpace Harvard in fundraising.

The total was up almost 2 percent from the previous year. The top 20 schools accounted for 27 percent of all donations, once again concentrating the wealth among the richest schools. The same 20 institutions raised about 2 percent less than last year.

Fundraising totals show how the richest colleges’ appeals to wealthy donors can help offset weak endowment returns. U.S. college endowments declined 1.9 percent on average, according to an industry survey. Congress is considering a bill requiring donors to wealthy schools set aside a portion of their gift for financial aid or risk losing their tax deduction.

“When investment earnings for colleges are down, they’re also down in portfolios for wealthy individuals and foundation and donor-advised funds,” said Ann Kaplan, the survey’s director. “When one of these sources loses wealth, generally on the whole, they all lose ground at the same time.”

Funds in the survey count money received, and don’t include pledges. Most of the contributions, about 60 percent, funded current operations. Gifts to build the endowment are about a quarter of the reported gifts, according to Kaplan. Most schools end their fiscal year in June.

Harvard, with a $35.7 billion endowment, beat its previous record of $1.16 billion two years ago, the only year Stanford didn’t come out on top since 2004. This is the third consecutive year Harvard raised more than $1 billion, according to survey data.

“It is hard to overstate the importance of philanthropy to the university,” according to a Harvard statement. Distributions from the endowment contributed to 36 percent of university operating revenues and gifts for current use represented 9 percent.

Read more: A QuickTake explainer on the riches of university endowments

Stanford has the fourth-largest endowment at $22.4 billion. Donations helped offset Stanford’s modest investment loss, in addition to “a strong increase in value” of campus real estate held by the school. About 15 percent of the endowment is made up of real estate holdings off campus leased to companies, hotels and other firms, according to the school. Stanford’s fiscal year ends in August, and its fund captured two strong months of performance.

Donations from individuals declined from the previous year. Those from alumni dropped 8.5 percent and by 6 percent from non-alumni, while giving from corporations grew by almost 15 percent. Support from foundations and other organizations was also up, according to the survey. Gifts for financial aid have been steady at about 16 percent for about a decade.

About 950 schools responded to the survey, and the group used data to estimate a total for institutions that didn’t respond.