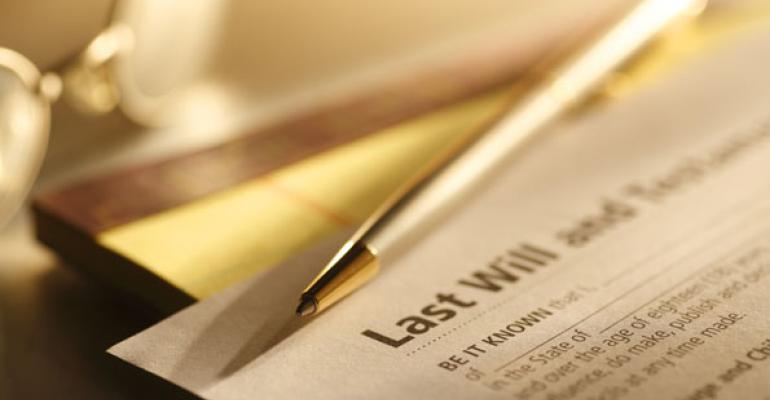 Estate Loses Out on Charitable Deduction

In the case of Belmont v. Commissioner, Eileen Belmont died on April 1, 2007, a resident of Ohio.  In her will, Eileen directed that her real and personal property be added to the residuary estate.  The first $50,000 of the residuary estate was left to her brother, David, and the remainder to the Columbus Jewish Foundation, an Internal Revenue Code Section 501(c)(3) organization (the Foundation).

Eileen owned two pieces of real property at the time of her death: her primary residence in Westerville, Ohio, and a condominium in Santa Monica, Calif.  Eileen also maintained a retirement account with the State Teachers Retirement Pension Fund of Ohio (STRPF), which distributed $243,463 to her estate following her death.  This distribution was income in respect of a decedent under IRC Section 691. Of the $243,463 distribution, $24,346 was withheld for federal tax and the remaining $219,117 was deposited into the estate’s checking account.

The estate filed its income tax return for the period ending March 31, 2008.   On the return, the estate reported income of $241,184, consisting of the STRPF distribution ($243,463), interest income ($721) and a long-term capital loss ($3,000).  The estate claimed deductions for taxes, return preparation fees and other miscellaneous fees and expenses totaling $21,604.  The estate also claimed a charitable deduction for $219,580 on the basis of Eileen’s bequeathing her residuary estate to the Foundation, although no portion of the residuary estate had been paid to the Foundation as of that date.

On April 2, 2008, David filed a creditor’s claim with the Los Angeles County Probate Court  claiming that the disposition of the Santa Monica condo under Eileen’s will was a breach of contract on the basis that an oral agreement existed among David, Eileen and their deceased mother, Wilma, giving him a life tenancy interest in the condo.  In 1986, Wilma had purchased a house in Santa Monica, where David resided until the house was sold in 2000.  At that time, David moved back to Ohio to assist Eileen in caring for Wilma until her death on Oct. 13, 2001.  Eileen subsequently purchased the Santa Monica condo on Jan. 2, 2003.  In 2006, David moved into the Santa Monica condo and resided there for approximately nine months, until Eileen’s death.  Following her death, Eileen’s estate was required to open an ancillary estate in California to administer the Santa Monica condo.  David continued to live in the condo rent-free during the ancillary estate administration and approached the estate’s California attorney about the possibility of exchanging his $50,000 bequest under Eileen’s will for a life estate in the condo.  The attorney advised David that he couldn’t purchase a life tenancy in the condo because the Foundation didn’t wish to own the condo and requested that David vacate the condo by March 21, 2008 in exchange for a $10,000 “stipend” from the Foundation.

David didn’t vacate the condo and instead filed the creditor’s claim.   David had a history of mental problems and was represented by a prominent California attorney on a pro bono basis.  On April 24, 2008, David filed Lis Pendens, Notice of Pendency of Action with the California Recorder’s Office and the court to alert third parties of potential action against the Santa Monica condo.  The estate rejected the creditor’s claim.

Eileen’s estate incurred various expenses in connection with the litigation surrounding the Santa Monica condo.  The estate used a portion of the $219,580 it had set aside for the Foundation to pay these expenses in addition to the continuing administrative expenses of the estate.  At the time of the Tax Court trial, the estate had approximately $185,000 remaining in its checking account.

The issue before the Tax Court was whether the estate was entitled to a $219,580 charitable deduction on its income tax return for the taxable period ending March 31, 2008.  The estate argued that it was so entitled under IRC Section 642(c)(2), which permits an estate to take a current charitable contribution income tax deduction, notwithstanding that the amount won’t be paid or used for a charitable purpose until some time in the future.  Under that section, an estate is allowed to take a charitable income tax deduction if, pursuant to the terms of the governing instrument, an amount is “permanently set aside for a purpose specified in section 170(c)…”  Treasury Regulations Section 1.642(c)-2(d) provides that an amount won’t be deemed permanently set aside unless under the terms of the governing instrument and the circumstances of the particular case, the possibility that the amount set aside won’t be devoted to such purpose is so remote as to be negligible.

The Commissioner contended that the $219,580 wasn’t permanently set aside for charitable purposes and, therefore, wasn’t properly deductible by the estate, arguing that “there was a substantial possibility of a prolonged and expensive legal fight which would have required the estate to dip into the funds it allegedly ‘set aside’ for charity in order to not only pay for the litigation, but to also pay additional administrative costs for the estate as the probate proceedings dragged on for years and years.”  Therefore, the estate should have been on notice at the time it claimed the charitable deduction that there was more than a negligible chance that it would have to apply some portion of the $219,580 to cover the litigation and administrative expenses.  The estate argued that there was no reasonably foreseeable possibility that it would incur the costs associated with litigating the claims on the Santa Monica condo.

“So Remote as to be Negligible” Standard

Although the Tax Court had never addressed the “so remote as to be negligible” standard in the context of Section 642(c), the Tax Court had on various occasions addressed the same standard in the context of IRC Section 170.  The Tax Court stated that when the estate filed its Form 1041 on July 17, 2008, it had enough information to determine that David’s claim to a life tenancy interest in the Santa Monica condo was a serious one based on alleged events that predated the end of the estate’s taxable year.

David’s actions leading up to the estate filing its Form 1041 on July 17, 2008 indicated that he would continue to fight his claim.  First, he didn’t vacate the condo and didn’t agree to the request that he leave in exchange for a $10,000 stipend.  Second, David filed a creditor’s claim on April 2, 2008 asserting a life tenancy interest in the condo.  Third, on April 24, 2008, David filed a lis pendens action.  Fourth, David filed an 850 petition on May 30, 2008, asserting the basis for his claims.  Finally, David retained a prominent California attorney, pro bono, to represent his interest in the Santa Monica condo.  The combination of all of these facts and circumstances that occurred prior to July 17, 2008 should have put the estate on notice that the possibility of an “extended and expansive legal fight” was more than “so remote as to be negligible.”

The Tax Court emphasized that the estate also should have been aware of its particular financial circumstances and how it would be affected by the litigation.  The estate didn’t have significant assets other than the funds in its checking account, and none of its assets were producing income.  This made it more likely that the estate would need to utilize the funds received from STRPF to pay for its expenses until the California proceedings concluded.  The estate consequently should have anticipated that it would need to utilize a portion of the $219,580 in its checking account to fund the litigation.  Accordingly, the Tax Court held that the $219,580 wasn’t permanently set aside for charitable purposes as required by Section 642(c)(2) and the estate wasn’t entitled to a charitable deduction for the entire amount.