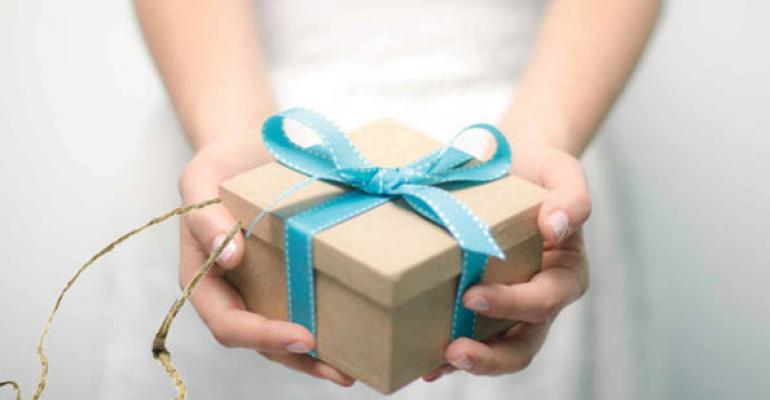 During robust M&A cycles, donor-advised funds tend to become popular philanthropic vehicles with business owners and other high-net-worth individuals who are looking for ways to minimize taxes. Considering the current level of M&A activity, I’ve seen a marked increase in demand for valuations of shares of privately held companies before an M&A transaction in connection with a charitable gift.

What Is a DAF?

A DAF is a simple, flexible, and tax-efficient way for clients to give to their favorite charities.

A DAF is like a charitable investment account for the sole purpose of supporting charitable organizations. When taxpayers contribute cash, securities or other assets to a DAF, they’re generally eligible to take an immediate tax deduction, avoid capital gains recognition and grow the donation tax-free. Those funds can then be invested for tax-free growth, and the taxpayer can recommend grants to any Internal Revenue Service-qualified public charity.

For donations such as privately held stock, Internal Revenue Code Section 170 requires obtaining a qualified valuation for the contributed property and attaching it to the tax return on which the deduction is first claimed. The taxpayer must file a Form 8283, which includes a signed declaration by the valuation professional relating to the accuracy of the valuation.

At a high level, and if executed properly, your client may be able to avoid capital gains tax on the sale of privately held stock. That stock continues to grow tax-free once in the DAF.

Let’s assume that 10 years ago, your client helped start a company and was granted 20,000 shares of stock at $1 per share, representing a one-third equity interest. That company has now retained an investment banker to market the company for sale, targeting a transaction price of $60 million. Being charitably inclined, your client decides to donate 10 percent of the proceeds, which equals 2,000 shares at an implied value of $2 million.

After consulting with his accountant and wealth advisor, your client is considering two options. The first option is to make a $2 million charitable donation after the company sells and your client receives $20 million in sale proceeds. Based on the calculations outlined in the table below, including the fact that your client will pay capital gains tax on this transaction, this results in a tax benefit of $344,000.

The second option is to contribute 10 percent of his shares to charity shortly before the scheduled close. This option requires obtaining a valuation from an independent qualified valuation professional. The valuer concludes a fair market value of $1.94 million, equivalent to a 3 percent discount to reflect the uncertainty of the closing. This results in a tax benefit of $717,800—$373,800 more than by donating the cash post-sale. 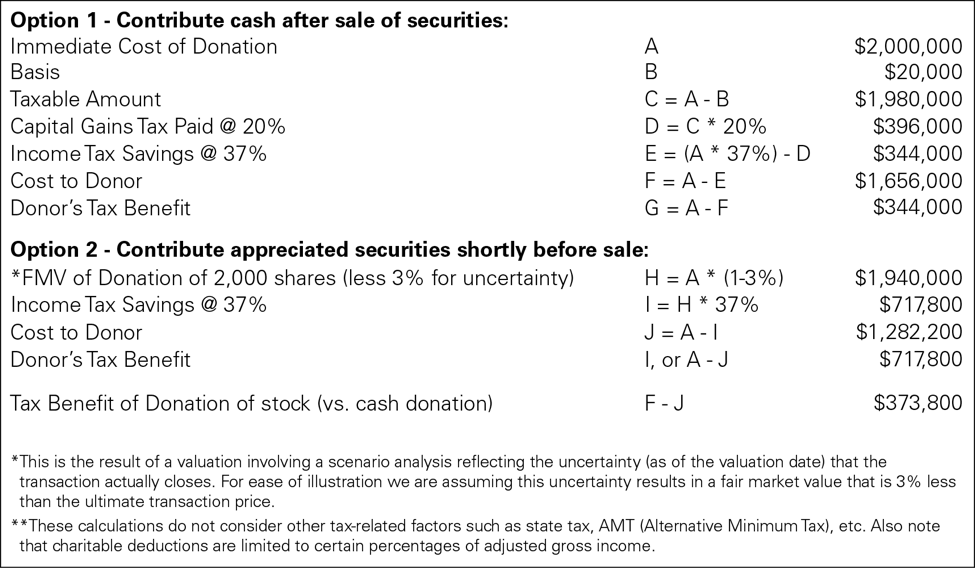 By electing Option 2, your client:

A contribution of stock in a company that’s close to being sold must be made by the donor shareholder before a legally binding agreement is in place. If a letter of intent is in place, it must be non-binding so that the parties can walk away without penalty and cause. If this isn’t the case, under the doctrine of anticipatory assignment of income, there’s a material risk that the IRS will ignore the charitable contribution to gain a tax benefit and cause the donor to recognize a taxable gain on the transaction.

A valuation isn’t required at the time the gift is made, but it may be obtained not earlier than 60 days prior to the gift.

FMV for charitable contribution purposes is defined in 26 CFR 1.170A-1 (c)(2) as “the price at which the property would change hands between a willing buyer and a willing seller, neither being under any compulsion to buy or sell and both having reasonable knowledge of relevant facts.”

For donated property such as privately held stock, 26 CFR 1.170A-1 (c)(3) states that if “a donor makes a charitable contribution of property, such as stock in trade, at a time when he could not reasonably have been expected to realize its usual selling price, the value of the gift is not the usual selling price but is the amount for which the quantity of property contributed would have been sold by the donor at the time of the contribution.”

In short, the transaction price is an essential factor, but it isn’t necessarily the determinant of value. Until a definitive agreement is signed, the transaction isn’t a done deal. Many fall through or get postponed and renegotiated at the “eleventh hour.” As such, when factoring in the ultimate transaction price, some uncertainty exists, which translates into a discount. As with any other valuation, the valuation professional must consider only those factors that were known or knowable as of the valuation date.

Can the client use a valuation that was recently prepared for another purpose? No. Valuations are purpose-specific. The valuation professional must prepare a given valuation following the standard of value, legislation and case law applicable to that purpose. This comes up most frequently when a company gets annual or more frequent valuations for IRC Section 409A or ASC Topic 718 purposes in connection with stock-based compensation.

Gift Made Shortly Before Transaction Closes

Anticipating a pending M&A transaction scheduled to close on Dec. 12, the donor shareholder makes a gift to her DAF on Dec. 1. There have been complications and delays at times in the past with pending transactions. The donor shareholder hires a qualified valuation professional to value the shares gifted two months later, in February. In this case, the valuation professional considered the following four scenarios in the analysis:

Each scenario begins with an underlying business enterprise value, from which the value for 100 percent of the company’s equity is determined after considering existing debt, excess assets and other expected transaction expenses. For each of the scenarios, the price agreed on in the transaction and the various indications of interest obtained during the process of seeking a buyer serve as the basis for the value. Use of the range of values of $100 million to $130 million is deemed reasonable because they were negotiated at arm’s length among willing participants in an M&A transaction, the values were current, and due diligence for the transaction was complete.

The underlying value of total equity is then allocated among the various shares, options, warrants and other claims. The impact of the time lag between receipt of cash flow and the valuation date (date of gift) is also considered. Then, the impact of marketability is considered and, where necessary, a discount for lack of marketability is quantified and applied. Finally, each of the scenarios is weighted to compute the concluded weighted average value on a per share basis.