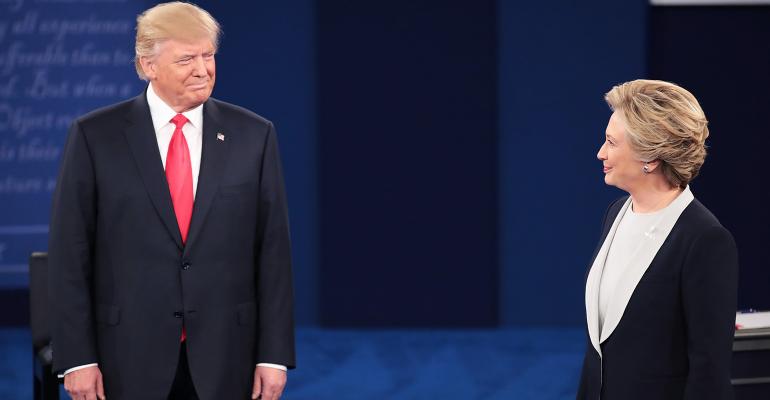 The Candidates’ Tax Proposals Viewed Through a Philanthropic Lens

Both donors and charities may be affected

In mid-September, both Hillary Clinton and Donald Trump updated their tax proposals, and each of the candidates’ plans now have proposals that, if enacted, could impact both high net worth individuals making charitable gifts and the charities that receive them. Of course, the proposals are simply that: Whoever is elected will need to work with a Congress that may be of a very different mindset. And whether any proposals are enacted also depends on the priorities of the newly elected president and Congress.

Viewing the candidates’ proposals through a philanthropic lens demonstrates how different a proposal can seem depending on a taxpayer’s individual circumstances. And not only could philanthropic taxpayers be affected by tax policy on charitable giving, but also the charities who benefit from their gifts could be affected, depending on how tax-sensitive donors are.

A Note About Charitable Giving

Donors give to charities for a myriad of reasons: to benefit their communities, establish a legacy and promote personal and family values, to name just a few. I focus here on the candidates’ tax proposals that impact the charitable contribution deduction; the larger question of whether charitable giving would change if tax incentives are changed is well beyond this article.

The current Tax Code provides tax incentives for both lifetime giving and testamentary giving through income and estate tax charitable deductions. In general, the income tax deductions are more restricted, limited by the amount of a taxpayer’s adjusted gross income (AGI), and vary with the kind of asset contributed and the nature of the charitable recipient as a public charity or a private foundation (PF).

The Proposals in a Nutshell

As backdrop, the charts below show the income and estate tax proposals of the candidates that are most relevant to high net worth individuals as of early October. As we’ve seen over the past few months, however, proposals can change. 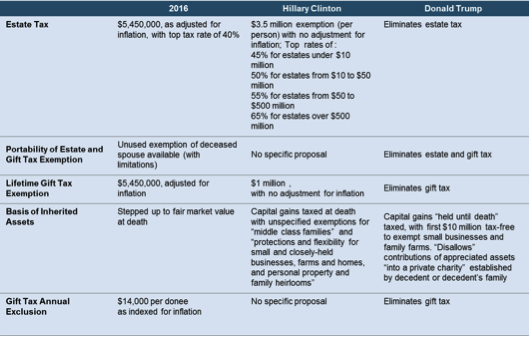 Turning first to the Clinton income tax proposals, Clinton has one proposal that specifically refers to charitable giving. Although she would limit the value of many itemized deductions to 28 percent regardless of the taxpayer’s actual tax rate, her proposal specifically excludes charitable contributions from that limitation. The Clinton proposal retains the current highest income tax rate of 39.6 percent, so high-income taxpayers may be able to save more in tax by making charitable gifts than they would with lower tax rates. The ultimate amount of the deduction would depend on any impact of the phase-out of the itemized deduction, if retained under the Clinton proposal. The phase-out can significantly reduce the allowable charitable deduction for donors with few other deductions, but can have limited impact on donors with many other deductions. It’s not clear how charitable giving would be impacted by Clinton’s proposals of a 30 percent minimum tax on AGI over $1 million (the “Buffet rule”) or a 4 percent surtax on AGI over $5 million.

Clinton’s estate tax proposals are quite different from current law, however, so the impact on charitable giving could be greater. Clinton would retain the estate tax but would reduce the estate tax exemption amount to $3.5 million per person. Further, she would increase the highest estate tax rate from the current top rate of 40 percent to 65 percent for estates with more than $1 billion. Higher estate tax rates, coupled with a lower exemption amount, could result in an incentive to make more gifts to charity, but as noted, that’s beyond the scope of this article. In a departure from current law, Clinton would treat bequests as a “realization” event, with the result that capital gains tax would be imposed on appreciated assets when bequeathed, subject to unspecified exemptions for middle-class families and “protections and flexibility for small and closely held business, farms and homes, and personal property and family heirlooms.” It’s difficult to analyze this proposal without more detail, but again, it could provide an incentive to make deductible charitable gifts.

Trump’s income tax proposals don’t directly refer to charitable giving, but he would impose an overall limitation on income tax deductions of $100,000 (single) and $200,000 (married), with no stated exception for charitable gifts. Trump’s proposal is silent on the current phase-out rule, but the new limitation could certainly impact philanthropic high-income taxpayers. In addition, because the Trump income tax proposal provides for lower tax rates, with a highest tax rate of 33 percent, the income tax savings from charitable gifts that are within the deduction limit may be less than under the Clinton proposal. As with the Clinton plan and current tax law, the actual tax savings from a charitable gift would be very dependent on the taxpayer’s circumstances.

Turning to the estate tax, Trump’s proposal would eliminate both the estate and gift tax, thereby eliminating any charitable contribution deduction. This of course may eliminate a charitable giving incentive at death, but as noted above, whether people will give less to charity when there’s no estate tax saving incentive to do so is well beyond the scope of this article. Again departing from current law, Trump’s proposal would tax capital gains “held until death.” However, the proposal doesn’t specify whether the gains would be taxed at death, as a realization event, or whether inherited assets would take a carry-over basis so that heirs would pay capital gains tax only on subsequent sale. The proposal additionally provides for an exemption of $10 million “for small business and farms as under current law.” Finally, the proposal states that to avoid “abuse,” no deduction would be allowed for contributions to “private charity” created by the decedent or the decedent’s family. The reference to “private charity” of course raises questions on whether contributions to PFs, either at the decedent’s death, or later, by family members, will be deductible. If such a provision were enacted, it could discourage giving to PFs or any other charity deemed to fall within the definition of “private charity,” but it might benefit public charities, which could instead receive contributions of appreciated assets held by a decedent.

Still Time to Give Before Year-End

Proposals during the campaign of course don’t have the depth and specificity of tax statutes and regulations. Because the new president and new Congress won’t be in office until 2017, those who wish to give before year-end have a window to continue their annual giving without any change. Long-term, charities and philanthropic taxpayers, like the rest of the country, will be watching to see what 2017 and beyond will mean for taxes and philanthropy.

This article is not designed or intended to provide financial, tax, legal, accounting or other professional advice since such advice always requires consideration of individual circumstances.