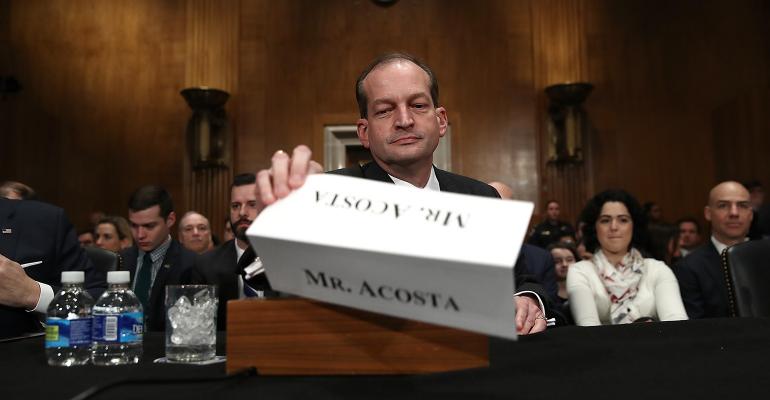 Alexander Acosta's confirmation gets heated over the fiduciary rule, look for nextgen clients on Snapchat and wealth building tips from millionaires.

A congressional hearing on the confirmation of Labor Secretary Alexander Acosta got a bit heated this week when (who else?) Sen. Elizabeth Warren pressed him on whether he would enforce the fiduciary rule, currently under review and facing a possible delay by the Trump administration. The nominee leaned on the Trump's executive order, answering, according to Forbes, "Senator, there is an executive action that addresses with specificity the fiduciary rule. It has asked the Department of Labor to look at the rule and to assess specific questions: Will the rule reduce the investment options available to investors? Will the rule increase litigation? Will the rule financially impact retiree investors? The executive action as I recall directs the Secretary of Labor and Department of Labor to repeal or revise the fiduciary rule if any of the criteria laid out in that executive order is found. That criteria really regulates and determines the DOL's approach to fiduciary rule." The back-and-forth continued with Warren asking, point-blank, "You think it’s important to protect retirees, I think it's important to protect retirees … I just want to know, generally, do you support this rule?" Acosta’s ultimate answer: "With respect, there is an executive action that directs how the Department of Labor will approach this rule. If I’m confirmed as Secretary of Labor, I believe and support my following executive orders of the president who would be my boss," he said.

Finding NextGen Clients Is a Snap

Despite a lot of skepticism from older generations about the long-term viability of Snapchat on Wall Street, the fact remains that the app is immensely popular among millennials. A poll of nearly 10,000 current college students by LendEDU found Snapchat is the app they are most likely to check first above Facebook, Instagram and LinkedIn. Parent company Snap says the majority of its 158 million users are aged 18 to 34 and check the app an average of 18 times per day. Users under the age of 25 check it more than 20 times a day. Snap still has to do a lot of growing to impress its investors, but advisors using social media as a way to find and connect with next generation clients may soon need to rethink their strategy.

The rich don't get that way quickly or by resting on their laurels. Instead, it takes hard work and even a little bit of luck to make your first million, and then some. StocktoTrade.com produced an infographic detailing the top 10 life habits of millionaires to build their wealth including hard work, persistence, passion, acquiring self-knowledge, associating with the right people and staying healthy. For example, 88 percent of millionaires devote 30 minutes or more each day to self-education or self-improvement, and 92 percent say good luck had nothing to do with their wealth. They just never gave up.