/sites/all/themes/penton_subtheme_wealthmanagement/images/logos/footer.png
Recent
Recent
Seven Must Reads for the CRE Industry Today (May 24, 2022)
May 23, 2022
Investment Activity in the Skilled Nursing Sector is Ramping Back Up
May 23, 2022
NASAA Approves Model Rule Targeting Unpaid Arbitration Awards
May 23, 2022
New York Tax-Paying Residents Were Moving Out Even Before Covid
May 23, 2022
Featured
The 10 Best and 10 Worst States in Which to Retire in 2021
Jul 15, 2021
Poll: 15 Classic Books on Investing and the Markets
Apr 03, 2020
Fifteen Must-Listen Business Podcasts for Advisors
Aug 14, 2020
Celebrity Estates: Jay Leno and Planning for Classic Car Collections
Feb 22, 2022
Ten to Watch
brought to you by 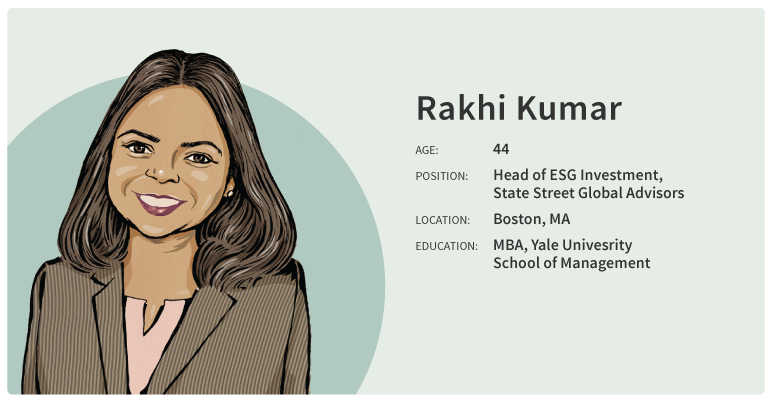 State Street made headlines in March for installing the “Fearless Girl” statue—standing defiantly in front of Wall Street's iconic Charging Bull—to bring awareness to its Gender Diversity Index ETF (SHE), which invests in companies with a higher percentage of women in leadership positions.

It’s a standing reminder of the money manager’s mark on corporate governance, an issue near and dear to Rakhi Kumar, SSGA’s head of ESG investments and asset stewardship.

ESG is a term that means different things depending on who you talk to. Many advisors focus on the ecological and social aspects—the traditional bases of socially responsible investing. But Kumar has become a leader in the global ESG fund field by largely focusing on the aspect that is often overlooked—governance.

Kumar started her professional life as a Chartered accountant in her native India, where she helped audit the books of multinational corporations. It was here that she got her first exposure to corporate governance issues and a glimpse of the role she would come to play in the future.

“I would look at these corporate compliance departments and see nothing but lawyers. It was obvious to me that there needed to be more of a finance voice to the process,” she says.

After getting her MBA at Yale, she worked for a professor researching governance issues.

She was then scooped up by Moody’s because, in the wake of the massive corporate scandals of the early 2000s (such as Enron), corporate governance was being thrust into the limelight.

At SSGA, one of the central issues that Kumar considers when assessing companies’ governance structures are shareholders’ rights—specifically, proxy voting and shareholder engagement.

“We use active stewardship to influence ESG issues that impact sustainable returns, primarily by taking actions through proxy voting,” she says.

The ability to prod companies through the shareholder voting process is one of the major reasons Kumar places such importance on governance—it provides the framework required to effectively address the ecological and social aspects.

Kumar recently found herself in the middle of a watershed moment for shareholder voting rights in February, when Snapchat issued shares at its IPO that gave investors no voting powers—a first for a U.S. company, and a huge red flag for Kumar.

“If shareholders don’t have the ability to appoint directors to oversee the company, then they don’t really have any rights.”

Kumar co-authored a thought leadership piece decrying the implications of Snap’s actions and offering some suggestions about how ESG-focused asset managers could deal with any future companies that try something similar. Dual-class stock offerings are nothing all that new, but Kumar explains that Snap’s offerings were “so egregious that they were a tipping point among investors who had to look in the mirror and ask themselves when ‘enough is enough.’”

Kumar has also played an outspoken role in SSGA’s push for gender diversity on corporate boards. “Our research shows that companies with greater levels of gender diversity have stronger financial performance, as well as fewer governance-related issues.”

Earlier this year, SSGA publicly vowed to take voting action against companies in its portfolios that don’t actively work towards adopting diversity measures. The combination of this public proclamation and the massive publicity surrounding the unveiling of “Fearless Girl” has put companies on notice.

“Fearless girl has exceeded our wildest dreams,” she says. “Companies have proactively called us and asked us not to take action against them.”