/sites/all/themes/penton_subtheme_wealthmanagement/images/logos/footer.png
Recent
Recent
BofA Revamps Wealth Management Product Teams Under Sieg and Knox
Jan 21, 2022
Eight Must Reads for the CRE Industry Today (Jan. 21, 2022)
Jan 20, 2022
CFP Board Announces New Commission to Adjudicate Appeals
Jan 20, 2022
The New 3-Legged Stool for Success
Jan 20, 2022
Featured
The 10 Best and 10 Worst States in Which to Retire in 2021
Jul 15, 2021
Poll: 15 Classic Books on Investing and the Markets
Apr 03, 2020
25 U.S. Markets Adding the Most Multifamily Units This Year
Feb 03, 2021
Fifteen Must-Listen Business Podcasts for Advisors
Aug 14, 2020
Ten to Watch
brought to you by 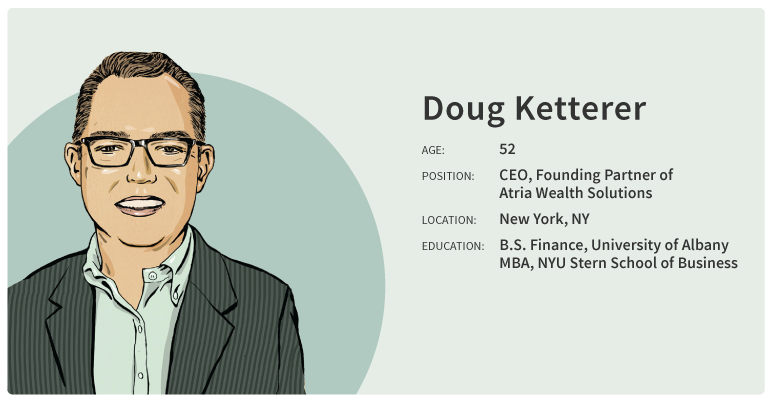 Getting a new company off the ground is difficult—even more so when you don’t have office space.

So when Doug Ketterer, until 2015 a long-serving executive with Morgan Stanley Wealth Management, and his two partners were brainstorming business ideas, they had to be creative. Their workdays would rotate among any of the large, indoor public spaces—atria, if you will—nestled among the corporate office towers of midtown Manhattan.

Out of those meetings came the aptly named Atria Wealth Solutions, an investor in independent broker/dealers. “It’s very personal to us,” Ketterer says. “We also like an atrium because, architecturally, they’re vibrant, there’s traffic, they’re exciting, there’s hustle and bustle, they’re energetic, there’s a lot of activity going on, but at the same time, you’re safe and protected.”

You could argue that exciting, energetic and safe hasn’t described the independent b/d business model for some time, but Ketterer hopes to change that. Atria Wealth Solutions, backed by private equity shop Lee Equity Partners, wants to build a new kind of IBD model not on indiscriminate acquisitions of existing registrations, but by carefully building a layer of support for independent advisors on top of a few well-chosen outposts for future acquisitions.

“The independent space is where the action is, and that’s where I wanted to spend the rest of my career,” he says.

Ketterer joined forces with Eugene Elias, former head of client and advisor platforms at Morgan Stanley, who brings the technology chops, and Kevin Beard, former head of acquisition and recruiting strategy at AIG Advisor Group, for expertise in practice management, recruiting and acquisitions.

They made their first move in early July. Sister b/ds CUSO Financial Services and Sorrento Pacific Financial, both based in San Diego, Calif., were the firm’s first acquisitions. They have a combined $30 billion in assets under administration and 500 advisors.

Some traditional IBDs struggle to evolve beyond their original mission as platforms for independent brokers to sell investment products. Ketterer said his vision is to bring more vital support services to the advisors, including recruiting pipelines for their practices, business management tools and investment capital. “This is not a roll-up strategy,” Ketterer says. “What’s interesting to us is buy and build.”

But he also has some experience integrating firms and keeping calm in the midst of uncertainty. He’s credited with being integral in facilitating Morgan Stanley’s merger with Smith Barney, for example.

“I think the theory is, bring in a private equity firm so that there’s no issue of capital, and then bring in these extra services to help advisors grow and become more profitable,” says Jodie Papike, executive vice president of Cross-Search, a recruiting firm focused on IBDs. “If it is in fact that it brings forth a model where there’s plenty of capital to keep the b/d in good shape financially, and it provides really good solutions for advisors, it could be the best of both worlds in the b/d environment.”