/sites/all/themes/penton_subtheme_wealthmanagement/images/logos/footer.png
Recent
Recent
Maddy Dychtwald – Women & Financial Wellness: Beyond the Bottom Line
May 24, 2022
Marriott Plans to Restart Share Buybacks on Rapid Hotel Recovery, CEO Says
May 24, 2022
The Search for Sustainable Investment Leaders
May 24, 2022
Nine Must Reads for the CRE Industry (May 25, 2022)
May 24, 2022
Featured
The 10 Best and 10 Worst States in Which to Retire in 2021
Jul 15, 2021
Poll: 15 Classic Books on Investing and the Markets
Apr 03, 2020
Fifteen Must-Listen Business Podcasts for Advisors
Aug 14, 2020
Celebrity Estates: Jay Leno and Planning for Classic Car Collections
Feb 22, 2022
Ten to Watch
brought to you by 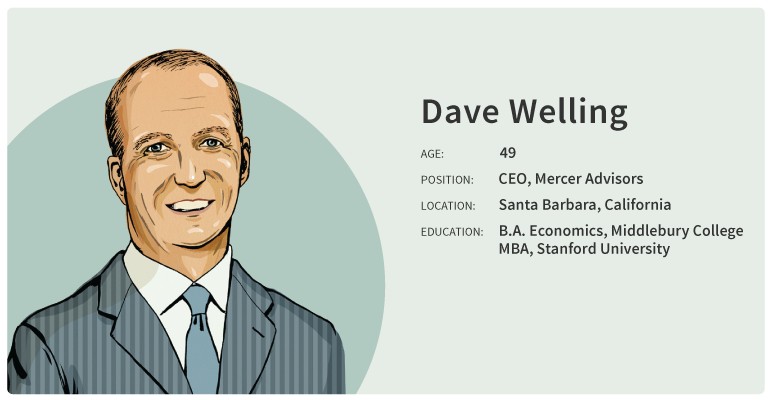 The universe of RIAs consists of thousands and thousands of small stars. The average practice has nine employees and 108 client accounts, according to research by the Investment Adviser Association and National Regulatory Services.

But the race is on to bring these stars together to create an industry supernova—a nationally branded, retail-facing RIA. Mercer Advisors is one of the more aggressive firms in the running, and has now brought on a technology veteran, Dave Welling, to lead it.

The Santa Barbara, Calif.–headquartered firm has made eight acquisitions in the last 17 months, from large (the $2.1 billion Kanaly Holdings) to, most recently, smaller firms (Bellevue, Wash.–based Blue Moon Wealth Advisory, with over $90 million in client assets). One more acquisition is expected soon. The firm is at $11 billion in total assets, close to 8,000 clients, and 25 offices around the country, a number Welling says he wants to double in two to four years.

“As fast as we can run the machine without sacrificing service to our clients,” he says of the planned expansion. Growth will come through custodial-referral programs, new-client prospecting—and expect to see more than a few additional acquisitions.

“[Mercer is] becoming the blueprint for the national RIA, which everyone’s trying to do,” says Tim Welsh, president of Nexus Strategy. “Can it be done? Most people say, ‘No, you need to have branches. You need to be like Schwab or Fidelity. You become a brokerage firm. You don’t become an RIA.’”

Mercer is making a different bet. Unlike other big players in the RIA M&A space, Mercer integrates the firms it brings onboard. “It’s not the aggregator model, which says, ‘Join us, we’ll take care of the overhead, you keep doing everything you want to do,’” Welling said. The firms Mercer is attracting “want to be part of an organization with a common purpose and a unified model.”

That’s possible because Mercer has made the leap from a traditional partnership model to a corporate structure, with a focus on the enterprise and a separation of roles between management and operations.

“It enables us to move faster on acquisitions; it enables us to roll out tax-prep service to the country and say, ‘This is how we do it, and this is how it’s going to be priced,’ and not have to go get votes from 15 different partners who want to do it 15 different ways, all of whom run separate fiefdoms and have a lot of power.”

Although the firm has private equity backing—Genstar Capital owns a majority stake—Mercer is funding the deals itself, via cash or access to lines of credit or debt. That allows the firm to retain its equity structure, and current shareholders get to keep their shares without diluting them.

Observers say it’s noteworthy that Mercer’s board tapped a chief executive whose career trajectory was largely in advisor technology. Welling worked in Schwab’s custody unit, building out the practice management group before joining Black Diamond in 2009; at the time, Black Diamond was a small tech startup in the decidedly non-tech capital of Jacksonville, Fla. The business started as a portfolio management and reporting tool for RIAs, and Welling helped triple it in his first year and a half. In 2011, Black Diamond sold to Advent for $73 million; in 2015, Advent was sold to corporate behemoth SS&C. Welling was put in charge of the Advent business, serving 5,000 global clients.

“I arrived back at a pretty big company in SS&C Technologies through what I affectionately refer to as two ‘arranged marriages,’” Welling says. “I have good empathy for what it feels like to be the acquired, and how to manage that transition effectively.”