/sites/all/themes/penton_subtheme_wealthmanagement/images/logos/footer.png
Recent
Recent
A Boom In Texting Spurs Latest Smarsh Acquisition
May 17, 2022
11 Must Reads for the CRE Industry (May 18, 2022)
May 17, 2022
Apple Delays Plan to Have Staff in Office Three Days a Week
May 17, 2022
Will Inflation Derail the Recovery in Restaurant Dining and Leasing?
May 17, 2022
Featured
The 10 Best and 10 Worst States in Which to Retire in 2021
Jul 15, 2021
Poll: 15 Classic Books on Investing and the Markets
Apr 03, 2020
Fifteen Must-Listen Business Podcasts for Advisors
Aug 14, 2020
Celebrity Estates: Jay Leno and Planning for Classic Car Collections
Feb 22, 2022
Ten to Watch
brought to you by 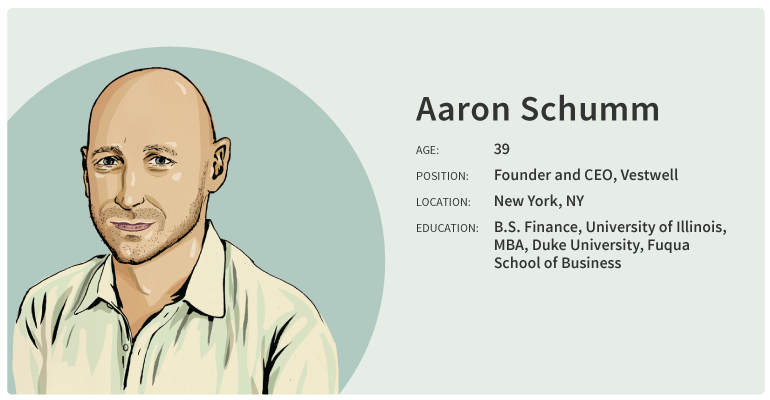 One of the great markets for growing RIAs is advising small- to medium-sized companies on their defined-contribution plans for employees.

Aaron Schumm saw that firsthand in 2010 with his firm FolioDynamix. Here was a firm that served 100,000 advisors and $800 billion in assets, yet when it came to creating a 401(k) plan for employees, he was in over his head. “I didn’t know half this stuff,” he said. “It was a very painful process.”

Vestwell uses information provided by the plan sponsor to automatically generate a retirement plan, a side-by-side comparison to the sponsor’s current plan, and a proposal letter for the advisor to use with the prospect. What can take weeks with traditional providers, Vestwell can do in a matter of minutes.

After launching the company in September 2016, Schumm said Vestwell signed 50 RIAs this year, as well as a few independent broker/dealers and asset managers. He plans to onboard several thousand advisors over the next month or so as they ramp up the assets on the platform.

Vestwell curates the investment strategies and acts as the named fiduciary, named investment manager, named administrator and named trustee to protect the advisor from compliance risk.

The product is free for advisors, and plan sponsors with less than $1 million in assets pay a one-time fee of $500. This fee is waived for assets over $1 million. After that, fees range from 35 basis points to 65 basis points, depending on the account.

Schumm says the goal is to charge 33 percent to 50 percent of what traditional plans cost, effectively solving the three biggest issues that have kept independent registered investment advisors away from the $6.8 trillion market: complexity, cost and compliance.

For retirement specialists focused on large plans, Schumm said Vestwell removes a lot of the legwork and lets them customize a plan that they can bring across a larger enterprise.

On top of that, the advisor gets direct knowledge of any rollover opportunities. Vestwell uses aggregation technology from Quovo (where Schumm sits on the advisory board) to let plan participants sync outside accounts, opening future opportunities for the advisor.

“At the end of the day, we get to do what’s right by everyone,” Schumm said. “I think every advisor should offer these services.”