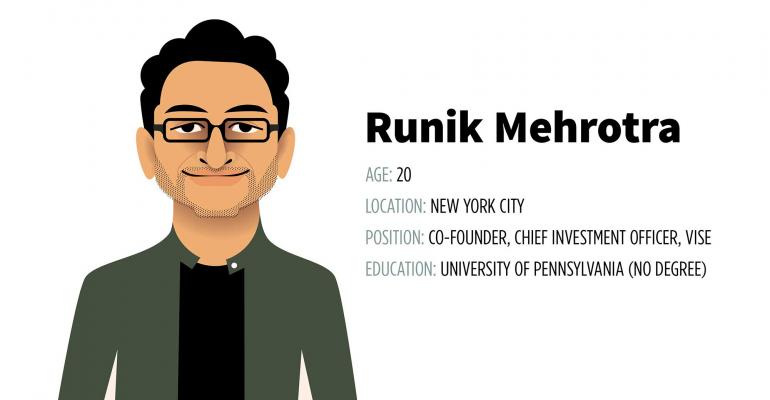 A classic tech entrepreneur’s dilemma: Runik Mehrotra could either continue studying business and earn a degree at the University of Pennsylvania’s Wharton School, or he could leave to focus on the potential of the company he had helped start in 2016. The co-founder and CIO of Vise chose the latter, transitioning from student to developing new tools for the industry alongside Samir Vasavada, Vise’s co-founder and CEO.

Today, the New York City–based technology firm is staking its future on the continued growth of the independent advisor channel, as well as an influx of technology into the wealth management space, as the duo builds what they call “a central nervous system for financial advisors.”

Described by Silicon Valley giant Sequoia Capital as “some of the most talented founders we’ve met,” Mehrotra and Vasavada see huge potential in building better investment management technology for advisors. Instead of using a set of managers or investment funds, Vise places its custom portfolio technology on top of an advisor’s tech stack, using software to make and defend investment selections. Vise connects with advisors’ custodians and allows advisors to refocus from the day to day of picking stocks or certain portfolios, allowing them to refocus on overall strategy and business growth.

Three year ago, Mehrotra was consulting for financial advisors but soon realized building tools for advisors was a better fit for his skills. Originally, Mehrotra and Vasavada wanted to build products for the institutional space, but an advisor described a more urgent need for independents.

“Institutions have this mindset of, ‘Let’s build this ourselves or acquire companies rather than necessarily try to select from a set of vendors.’ But independent advisors absolutely need technology like this,” he said. In fact, one of his consulting clients first suggested Vise should market to independent advisors instead of institutions.

In need of funding, Mehrotra approached venture capital firms and soon found himself trying to shift the thought process of many in Silicon Valley.

“They got it wrong, initially, in terms of backing the robo advice platforms,” he explained. VC firms initially thought they could disrupt the financial advice industry by targeting advisors, eventually pushing them out of the picture with software.

“Originally Silicon Valley felt like what’s wrong in this space is the inefficiency of humans, and they backed robo advisors to replace them,” he said.

In May, Sequoia Capital led a $14.5 million investment round in Vise, which said it had commitments from financial advisors of $800 million in AUM, demonstrating that maybe Silicon Valley finally sees a future for human-powered advice after all.