/sites/all/themes/penton_subtheme_wealthmanagement/images/logos/footer.png
Recent
Recent
11 Must Reads for the CRE Industry Today (Sept. 22, 2021)
Sep 21, 2021
The Consumer Convenience Era is Here: How Advisors Can Keep Up
Sep 21, 2021
Green Property Debt Frenzy Comes with Opaque Climate Standards
Sep 21, 2021
Evictions Loom for Millions of Tenants and Slow Rental Aid Disbursement Isn't Helping
Sep 21, 2021
Featured
The 10 Best and 10 Worst States in Which to Retire in 2021
Jul 15, 2021
Poll: 15 Classic Books on Investing and the Markets
Apr 03, 2020
25 U.S. Markets Adding the Most Multifamily Units This Year
Feb 03, 2021
Fifteen Must-Listen Business Podcasts for Advisors
Aug 14, 2020
Ten to Watch
brought to you by 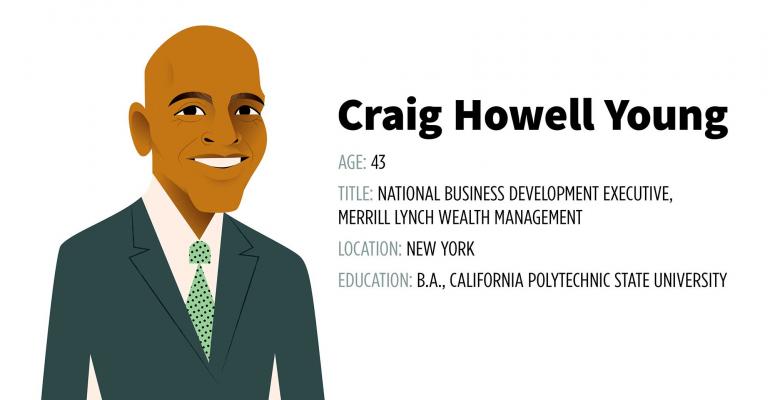 Craig Young, one of the youngest members of Andy Sieg's executive leadership team at Merrill Lynch, is charged with ensuring all 14,000 of the Thundering Herd are working toward the same goals.

Young was a college football coach for Southern Oregon, Princeton and Sacramento State before becoming a financial advisor with Smith Barney in Houston in 2006. He’ll need to pull on that experience in his new role at Merrill Lynch: mentor, motivator and coordinator ensuring a disparate team of some 14,000 across the Thundering Herd are working toward the same goals and learning from the best among them.

That includes being the point person to ensure those advisors are able to integrate what Sieg said were major enhancements for the field. “Over the weeks and months ahead, Craig and his team will play a key role in ensuring the field is positioned to leverage two major enhancements for our advisors and their clients—our new advisor workstation, and new financial planning and monitoring capabilities—in ways that help advisors create capacity and best serve clients,” said Sieg.

Sieg has given Young orders to better facilitate communication among Merrill advisors to share their business tips or “best practices” in a formalized manner—part of a broader campaign within Merrill to enhance productivity and catch up to the standards of the larger commercial bank.

It is no secret that wealth management is one of Bank of America’s least efficient businesses—the expense ratios, or the percent of revenues eaten up by expenses, at Merrill and the bank’s trading unit were almost double those at its investment bank and commercial bank in the first quarter of this year.

In recent years, Merrill has incented its advisors to bring in more new clients by tying compensation even closer to client and AUM growth goals. Bank of America CEO Brian Moynihan has also talked recently about driving efficiencies at Merrill through office consolidation and enhancing digital adoption by wealth clients.

Merrill officials have said that while profit generation across the 105 “markets” where the company operates is up, results have been inconsistent. “While there isn’t a lot of distance between Merrill’s best-performing and worst-performing markets,” said Sieg, “Craig is helping create greater consistency in how the firm integrates and drives growth across the country.”

Through his position atop Merrill’s Advisor Growth Network, the group’s nationwide forum of advisors, Young has been filtering and amplifying new practice management ideas since the end of March, a role made even more important since the onset of the pandemic. He’s upped advisor use of “the Bull Horn”—an internal, Wiki-like site for best practices and case studies contributed by the firm’s top advisors. Young has dramatically increased the uptake to 90,000 views in the past six months alone, Sieg said.

Young has also been responsible for organizing weekly leadership meetings between Sieg and the company’s approximately 750-strong divisional and market leadership ranks and is organizing Sieg’s weekly podcasts for Merrill Lynch’s 25,000 employees with outside experts and internal stakeholders.