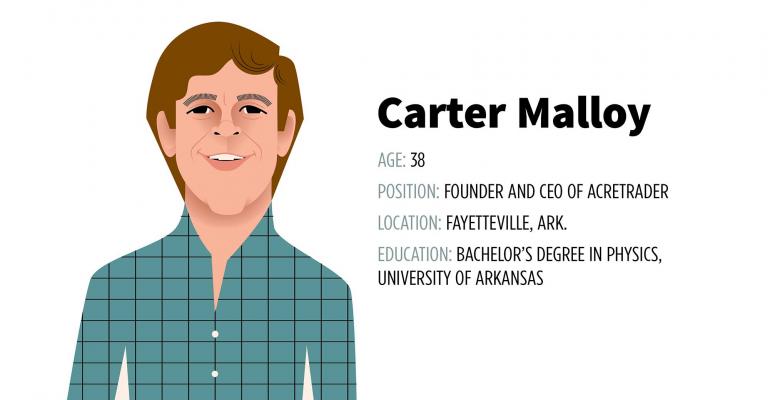 Carter Malloy wants to create a new asset class via a platform where clients can buy and sell slices of farmland as easily as they can shares of Deere & Company.

It’s not rare to see a fintech firm spring to life between the coasts. It is to see one that focuses, literally, on the heartland itself.

That is the mission of AcreTrader and Carter Malloy, its founder and CEO. Based in Fayetteville, Ark., a city surrounded by agricultural America, Malloy wants to create a new asset class via a platform where clients can buy and sell slices of farmland as easily as they can shares of Deere & Company.

Malloy grew up on a family farm, yet his academic and career path steered him into asset management. He spent the first 12 years of his career working as an equity analyst.

“I’d been investing in residential real estate, commercial real estate and farmland—and in a lot of cases it was the farmland that was coming out on top in terms of the returns we were able to generate,” said Malloy, who was also helping his father buy and sell land. “It got me interested in doing more analysis.”

He would go online, however, and was shocked to find nothing available to help with those valuations or transactions. There was no real way for a wider pool of investors to access the asset as a component of their investment portfolio.

It was a classic case of “information asymmetry,” where insiders have the advantage because of the lack of transparency and availability of data to see where the market for farmland stood at any given time.

So Malloy set out to try and make it as easy to buy farmland as it is to buy a stock or fund. In addition to systematizing the data around land, including soil quality, yield and long-term access to water, among other factors, Malloy built the platform to support the transactions themselves.

Unlike REITs where investors own a share in the trust itself or part of the mortgage behind the properties purchased—which may include many different properties or even types of properties—investments at AcreTrader are in a slice of a single farm. Each farm is purchased and converted into an LLC, of which the investors buy shares (either directly or through an intermediary), thereby owning a piece of the farm itself and receiving ongoing revenue from its operation.

In April, RZC Investments, founded by heirs of Walmart founder Sam Walton, led an oversubscribed $5 million seed round in the company.

“I remember the biggest fight my parents ever had when I was younger, which was over my father having paid $80 an acre and how it was just way too much. Now that same land is probably worth $4,000 to $5,000 an acre,” Malloy said. While AcreTrader may not have put an end to that argument, it promises to make the chance for that kind of investment available to everyone.