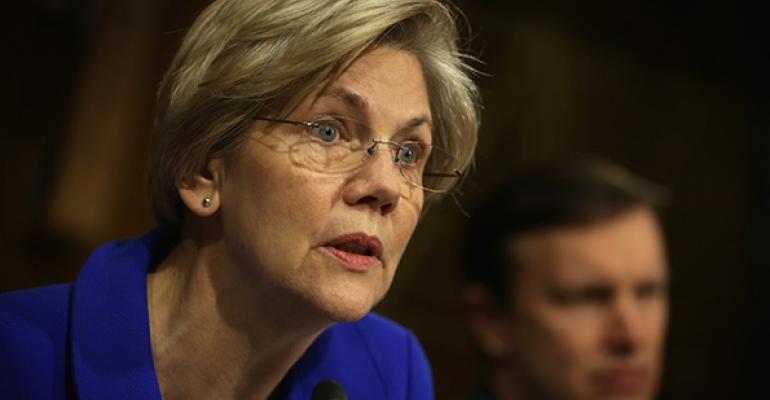 (Bloomberg) -- U.S. Senator Elizabeth Warren is taking the Securities and Exchange Commission to task for allowing Steven Cohen back in the hedge fund game just months after the billionaire settled allegations that he failed to supervise a convicted insider trader.

“This decision raises serious questions about the SEC’s ability to protect investors, to uphold the integrity of financial markets from corrupt, illegal investment management practices, and to impose meaningful accountability on wrongdoers,” Warren, a Massachusetts Democrat, wrote in a letter dated April 21 to SEC Chair Mary Jo White.

Warren is balking at an accord struck between the SEC and Cohen in January that bars him from running a hedge fund or overseeing traders who work at a firm that manages money for outside investors until 2018. The deal didn’t put restrictions on ownership and Cohen has formed a new firm named Stamford Harbor Capital that plans to invest external money in illiquid and nonpublic securities.

Warren, in her letter, wrote that Cohen’s move is an “unacceptable outcome” that makes a “mockery of the SEC’s core mission to protect investors.”

An SEC spokeswoman declined to comment on Cohen’s startup when Bloomberg asked about the firm last week. The formation of Stamford Harbor is consistent with the terms of Cohen’s settlement because “he will not supervise the activities of anyone working on its behalf,” Jonathan Gasthalter, a spokesman for the firm, has said.

As one of several hedge fund managers swept up in a federal investigation of insider trading, Cohen’s SAC Capital Advisors pleaded guilty to securities fraud in 2013 and agreed to pay a record $1.8 billion fine. While Cohen wasn’t charged in the criminal proceeding, he agreed to return all of SAC’s outside capital and convert the firm into a family office called Point72 Asset Management.

The SEC filed a separate civil suit against Cohen in 2013 that alleged he failed to supervise two SAC portfolio managers who were charged with insider trading.

While the SEC initially planned to permanently ban Cohen from the money management industry, the agency’s hand was weakened by a 2014 federal appeals court ruling that made it harder for the government to uphold insider trading convictions. The SEC ended up reducing its allegations against Cohen to one trader: Mathew Martoma, who is serving a nine-year prison sentence.

In announcing the settlement on January 8, Andrew Ceresney, the head of the SEC’s enforcement division, said that the two-year supervisory bar and the additional oversight requirements achieved “significant and immediate investor protection.” SEC Chair White and the agency’s commissioners unanimously approved the accord, the SEC’s website shows.

A little-noticed provision in the settlement permitted Cohen to almost immediately resume raising outside money, so long as his personal role at a firm was restricted to passive ownership instead of active management.

“Nothing in this order shall be read to preclude or inhibit” a firm that is wholly owned by Cohen “from applying to register as an investment adviser,” the January settlement says.

Some five weeks later, Cohen filed with the Delaware Division of Corporations on Feb. 17 to incorporate Stamford Harbor. The firm’s application to register as an investment adviser became effective March 14, SEC records show. It will be run by the top executives at Cohen’s family office.

In her letter, Warren asked the SEC for a briefing on its decision to allow Stamford Harbor to manage outside money. She also asked the regulator for a list of other individuals who’ve been barred from running a hedge fund, but still have indirect involvement with a firm.