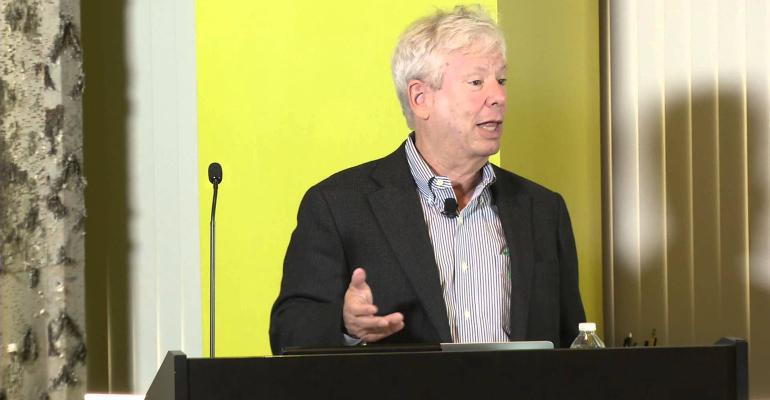 The behavioral economist talks about choice, football and what economists are good for.

by Justin Fox
(Bloomberg View) -- Even before winning the Nobel Prize on Monday, Richard Thaler was a pretty successful mainstream economist. He’s president of the American Economic Association, for one thing. He is also, as his University of Chicago colleague John Cochrane once put it in a snarky blog post, “a Distinguished Service professor with a multiple-group low-teaching appointment,” which I think is a really posh thing to be. His ideas about public policy, as expressed in “Nudge,” the 2008 bestseller he co-authored with Bloomberg View’s own Cass Sunstein, have had great influence on both the Conservatives in the United Kingdom and the Democrats in Washington. A study he did with his former student, Shlomo Benartzi, now at the University of California at Los Angeles, has transformed the design of 401(k) retirement plans at American corporations. Oh, and he’s a principal in a $3 billion asset management firm.

It wasn’t always like that, though. Thaler’s early embrace of research by psychologists Daniel Kahneman and Amos Tversky on how people actually think about probability and risk -- and how that reality diverges from the models wielded by economists -- was a risky, low-probability bet that economists would ever take such work seriously. In his 2015 book, “Misbehaving: The Making of Behavioral Economics” (reviewed on Bloomberg View by Michael Lewis), Thaler told the story of how he came to make that bet and how it played out. During a visit to Bloomberg HQ in June 2015, I asked him a few questions about how economists think.  What follows is a much-edited transcript.

Question: What are the most valuable things that you got out of studying economics in graduate school?

Answer: The main thing that you learn in grad school, or should learn, is how to think like an economist. The rest is just math. You learn a bunch of models and you learn econometrics -- it’s tools. Some people who are so inclined concentrate on having sharper tools than anybody else, but my tools were kind of dull. So the main thing was just, “How does an economist think about a problem?” And then in my case it was, “That’s really how they think about a problem?”

Q: So for you it was valuable basically as a model to react against?

A: I didn’t know that at the time. I did have these deviant thoughts in grad school but it was quite a while before I started to really think that I could make a living as a troublemaker. That’s not a career path that I would recommend to anybody. You can’t just be a critic. You have to produce something, and I didn’t know what to produce.

Q: One thing that’s striking -- Kahneman calls it “theory-induced blindness” -- is this sense that if you have a really nice theory, even when someone throws up evidence that the theory doesn’t hold there’s this strong disposition to laugh at the evidence and not even present counterevidence.

A: Because they know you’re wrong. This has happened to me. It still happens. Not as often, but people have what economists would call strong priors. Even our football paper, which may be my favorite of all my papers, we had a hell of a time getting that published, because --

Q: Is this the fourth down paper …?

A: No, no. This was about the NFL draft. I wish I had written the fourth-down paper. [David Romer of the University of California, Berkeley did.] And Romer ran into the same problem, which is people saying, “That can’t be right, firms wouldn’t leave that much money on the table.” Economists can think that because none of them have ever worked in firms. Anybody who’s ever been in a large organization realizes that optimizing is not a word that would often be used to describe any large organization. The reason is that it’s full of people, who are complicated.

Q: Over the last few years it’s become popular to say that economists have led us astray. When you hear that, whose side do you take? It seems like you’re still a danged economist.

A: There’s nobody else ready to step into the breach. Yes, I’ve been critical of economists for having blinders on, theory-induced blinders if we want to call them that. But certainly Danny Kahneman doesn’t want to be Fed chairman or chairman of the Council of Economic Advisers or Treasury secretary.

Very early when I had decided, “Okay, this is what I’m going to do,” there was a deliberate decision made by me and my few friends and Eric Wanner at the Russell Sage Foundation, who was one of our few supporters, that this was not going to be an attempt to create a new discipline.

First of all, we still need the basic theory. You know better than anybody that we don’t want to throw away the efficient market hypothesis. We just don’t want to believe it’s true.

That’s true of all economic theories. Take [Paul] Samuelson’s groundbreaking work on the free-rider problem. Obviously that’s a huge problem, and climate change is all about it. But if you think, “Well, that means no one will ever do anything if it’s not in their self-interest,” you’re really missing out. It’s essential that we understand things like the free-rider problem, but we also need to understand that, fortunately, humans are a little nicer than economists give them credit for. Some people actually leave money at roadside fruit stands, some people give money to NPR so we can listen to it.

Q: So why do you feel more optimistic about economics?

A: Because new guys come in. People like Raj Chetty. He’s the future of economics.

Q: What is it about him that you like so much?

A: Well, I mean, everything. But the reason I point to him is not just because he’s a spectacular young economist but because he is a behavioral economist when the data tell him that he should be. At the end of my book I talk about what we need is evidence-based economics. Which I understand is kind of a cheeky term, but there are people like Raj out there gathering all kinds of evidence.

Q: You’re a fan of Milton Friedman, who wrote that it doesn’t matter how unrealistic an economist’s assumptions are. The second part of his argument, though, was that it does matter whether your model’s predictions are any good, if the data backs it up. And that second part seems to have gotten kind of thrown out.

A: If you go back and read Friedman, his model of the consumption function was not that far removed from [John Maynard] Keynes. The simple version of Keynes is consumption equals 0.95 times income. Then Friedman said well, it should be permanent income. How did he define permanent income? The data told him that a three-year moving average worked pretty well. That model lost out immediately to [Franco] Modigliani’s life-cycle hypothesis, which used lifetime income. Lifetime is preposterous. What 20-year-old is thinking about lifetime?

Q: I love the line in your book about Robert Barro. You said he assumes everybody is as smart as he is and you assume everybody’s as dumb as you are. And he of course agreed.

A: Yeah, that’s it. Economics can’t be a model of Barros. That’s caused us great harm in the way we’ve devised 401(k) plans. Harm we’re in the process of fixing, but there’s still a lot of work to be done. I gave talks to two large groups of plan sponsors recently where I said, "If the participants in your plans aren’t saving enough for retirement, it’s your fault." Because we know how to do it: Automatic enrollment, not at 3 percent, but start them at 6 percent. Automatically escalate them up to some sensible number, create a good default investment vehicle that will rebalance for them so that they don’t buy high and sell low like they love to do, and get rid of company stock.

Q: In terms of the real-world interventions that have come out of behavioral economics, do you think the 401(k) stuff is the most significant?

A: So far. More than half of large plans now use automatic enrollment and automatic escalation.

Q: Out on the horizon is there some other thing that you think has equal promise?

A: Not in the sense that I know the answer and all we have to do is convince them to do it. There are domains that are really important, like health and climate change. And I would add, in some countries, tax compliance. Why is Greece where they are now? If I had to say one thing, it’s that people think if you pay your taxes you’re an idiot. Well, that’s a behavioral problem.

Q: The whole idea of nudging, generally it’s been very popular, but there’s a subgroup of people who react so allergically to it.

A:  I think most of the criticism at least here comes from the right. These are choice-preserving policies. Now you’d think they would like those. I have yet to read a criticism that really gets the point that we probably make on the fourth page of the book, which is that there’s no avoiding nudging. Like in a cafeteria: You have to arrange the food somehow. You can’t arrange it at random. That would be a chaotic cafeteria.

Some people will say, "Well, if you create the default, that’s already too heavy-handed." Now, you can’t say that and think people are rational. So that’s point 1. Point 2 is all right, you could require people to choose instead, but that’s just a different choice architecture. I think that’s a perfectly appropriate policy option in some circumstances. It’s really terrible for 401(k) plans.