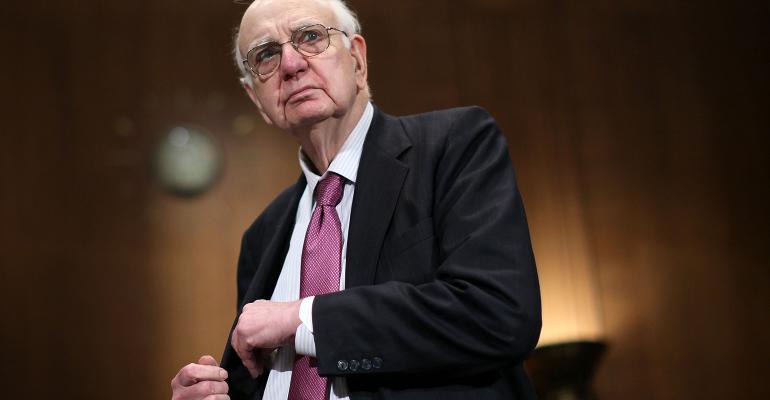 During Paul Volker's more than a half century career, he was called on to devise a successor to the gold standard, a cure for runaway inflation and, in 2008, a response to the housing-market collapse.

(Bloomberg) -- Paul Volcker, the former Federal Reserve chairman who broke the back of U.S. inflation in the 1980s and three decades later led President Barack Obama’s bid to rein in the investment risk-taking of commercial banks, has died. He was 92.

He died Sunday in New York, according to his daughter, Janice Zima.

In a career that spanned more than half a century, Volcker became a one-man economic cleanup crew, called on to devise a successor to the gold standard, a cure for runaway inflation and, in 2008, a response to the housing-market collapse that exposed Americans as perilously leveraged and their banks as highly prone to risk. That last effort led to the Volcker Rule, widely loathed by bankers and subsequently a top priority for overhaul by the Trump administration.

“Paul was as stubborn as he was tall, and although some of his policies as Fed chairman were politically costly, they were the right thing to do,” said former President Jimmy Carter, who appointed Volcker as Fed chief in 1979. “We are grateful for his service to our country.”

The grandson of German immigrants, Volcker held strong beliefs about the dangers of inflation and the virtues of frugality. He flew coach, grumbled about restaurant prices and took his first wife on a honeymoon to a fishing cabin in Maine rather than to Bermuda, as she’d hoped. He scorned financial industry innovations such as credit-default swaps and quipped that the best new financial product in recent decades was the automated teller machine.

Volcker worked at the Treasury Department, the Fed, or as an economic adviser under six presidents. At 81, two decades removed from his Fed days, he was recalled to government duty in November 2008 by Obama, the president-elect, who named him to head a new Economic Recovery Advisory Board as the nation was struggling to pull out of a recession and recover from the worst financial crisis since the Great Depression.

Within months, the 6-foot-7-inch (2 meters) Volcker was standing out as the White House insider pushing for the most radical regulatory reforms. He wanted to bar traditional deposit-taking banks from making speculative investments on their own account, the practice known as proprietary trading, and from investing in hedge funds and private-equity funds. Obama formally proposed the idea in January 2010, calling it “a simple and common-sense reform, which we’re calling the Volcker Rule -- after this tall guy behind me.”

Volcker’s rule was incorporated in the 2010 Dodd-Frank law -- though not before being weakened, which led Volcker to express doubt about the Obama economic team’s commitment to it. “They say they’re for it, but their hearts are not in it,” he told Ron Suskind, author of the 2011 book “The Confidence Men.”

When Volcker left his White House post, in February 2011, regulators were sifting through a flood of public comments on the implementation of Dodd-Frank. Banks continued to argue that Volcker’s proposal would excessively restrict their business.

“Paul Volcker, by his own admission, has said he doesn’t understand capital markets,” Jamie Dimon, chief executive officer at JPMorgan Chase & Co., said on Fox Business News in February 2012. “Honestly, he has proven that to me.”

The Federal Reserve, Federal Deposit Insurance Corp. and three other agencies completed the final rule in December 2013. It ran close to 100 pages, with hundreds more in supporting material, and sought to distinguish proprietary trading from still-permitted market making and hedging to mitigate risks. Volcker quipped that in the end, “I was gratified to see that the rule itself is shorter than my own home insurance policy.”

The rule took effect in July 2015. President Donald Trump, in 2017, ordered regulators to rewrite the rule and soften its effect. In an Aug. 20, 2019, letter to Fed Chairman Jerome Powell, Volcker complained that regulators had used “simplification” as an excuse to weaken the rule in a way that would amplify risks to the financial system.

Paul Adolph Volcker Jr. was born on Sept. 5, 1927, in Cape May, New Jersey, to Paul Sr., the coastal town’s manager, and his wife, the former Alma Klippel. The family moved to Teaneck, in northern New Jersey across the Hudson River from New York City, in 1930 when the elder Volcker, a civil engineer, became that town’s manager.

Known as Buddy to distinguish him from his father, Volcker had to repeat kindergarten because teachers interpreted his silent manner as a sign of immaturity, his mother told Newsweek for its 1986 profile.

He received a bachelor’s degree in 1949 from Princeton University and a master’s degree in political economy and government from Harvard University in 1951. In 1951-1952, as a student at the London School of Economics, he toured Europe at the expense of his planned Ph.D. thesis, which never got done, Joseph B. Treaster wrote in “Paul Volcker: The Making of a Financial Legend,” his 2011 book.

Volcker’s career as an economist began in 1952, when he took a job at the Federal Reserve Bank of New York. He left five years later for Chase Manhattan Bank, where he worked closely with David Rockefeller, then the vice chairman. In 1962, Volcker took his first job in Washington, as director of the Treasury Department’s Office of Financial Analysis during the administration of President John F. Kennedy. He served as deputy undersecretary of monetary affairs under Lyndon Johnson, where he witnessed the president’s attempt to prevent then-Fed Chairman William McChesney Martin from raising interest rates. In 1965 Volcker returned to Chase.

He left Chase for Washington for a second time in 1969, this time to be Treasury’s undersecretary for monetary affairs in the Nixon administration. In that role, he helped craft a new international monetary framework to replace the fixed exchange rates and gold standard of the Bretton Woods system, which had been in place from 1944 until Nixon ended it in 1971.

As president of the New York Fed from 1975 to 1979, Volcker became the loudest voice on the Federal Open Market Committee advocating monetary restraint and high interest rates -- a full-fledged inflation warrior. “Sometimes we still hear the argument that in time we can learn to live with inflation,” he said in a 1978 speech. “But experience suggests the contrary -- that this powerful economy of ours will simply not work smoothly or at anything like maximum efficiency or output when there is pervasive uncertainty about the price level.”

Carter named Volcker Fed chief in 1979, succeeding G. William Miller, who became Treasury secretary. Miller had been criticized for being insufficiently focused on fighting inflation. During his 17 months as Fed chairman, inflation had risen to 11.8% from 6.6%.

“The challenge was very clear when I was there: you’ve got an inflation problem and it was getting out of hand,” Volcker said in a 2006 interview. “And the country knew that something was the matter. There was unhappiness with the economy. That is a situation in which you can act.”

Volcker announced what became known as his “Saturday Night Special” on Oct. 6, 1979: a series of measures intended to squeeze inflation. The moves began with a 1 percentage point increase in the rate Fed banks charge financial institutions, to 12%. But the most dramatic was the Fed’s shift to focusing on limiting money supply growth--even if it meant large jumps in interest rates. Which in the end it did, as interest rates climbed as high as 20%.

In his 2018 memoir, “Keeping At It,” Volcker said that targeting the money supply provided the Fed with two advantages: A simple message to convey to the American public, and “an internal discipline that had been lacking.”

“We were ‘lashed to the mast’ in pursuit of price stability,” he wrote. “Did I realize at the time how high interest rates might go before we could claim success? No.”

Volcker’s policies came at a high price and the fallout contributed to Ronald Reagan’s landslide victory over Carter in the 1980 presidential election. The U.S. economy went into recession twice during his tenure, the jobless rate climbed to 10.8% in November 1982, and bad loans and bankruptcies soared. Homebuilders and farmers protested. Congressional leaders including Democratic Senator Robert Byrd of West Virginia and Republican Representative Jack Kemp of New York introduced legislation aimed at requiring the Fed to lower interest rates. The bills were not adopted.

A bodyguard was assigned to Volcker after a man entered the Fed building in Washington with a sawed-off shotgun, revolver and knife, according to William Greider’s 1987 book “Secrets of the Temple.”

Volcker struck some as aloof during televised congressional hearings, puffing on a cigar and shaking his head while being questioned by angry lawmakers. Toward the end of his tenure at the central bank, he was challenged by Reagan appointees to the Fed who favored lower rates.

Though he was vilified in some quarters for the impact on business, his determined--and successful--assault on inflation won him admirers in both U.S. political parties and among a generation of central bankers from New Zealand to South Africa.

Volcker “deserves primary credit for the signal macroeconomic achievement of the past 30 years -- slaying the inflation monster that was engulfing the American economy at the end of the 1970s,” Charles R. Morris wrote in “The Sages,” his 2009 book about Volcker, Warren Buffett and George Soros. “The stable global economic growth of the 1980s and 1990s was grounded on Volcker’s conquest of inflation.”

Volcker stepped down in 1987, saying he didn’t want a third term. His departure and Reagan’s nomination of Alan Greenspan prompted stocks, bonds and the dollar to slide. By that time, the Fed’s benchmark rate was at 6.75%, inflation had slowed to about 4%, and the economy was in the fifth year of an economic expansion.

Volcker became chairman of James D. Wolfensohn & Co., a mergers-and-acquisitions firm that became Wolfensohn & Co. He left after the firm was sold to Bankers Trust in 1996.

His reputation for rigor and fairness led to his appointment in 1996 to supervise the payment of claims by Swiss banks to Holocaust victims, and in 2004-2005 to lead an independent investigation of the United Nation’s oil-for-food program in Iraq. In 2002 he led an unsuccessful effort to salvage part of Arthur Andersen LLP, the accounting firm that collapsed following its conviction of obstructing justice in the investigation of Enron Corp., its client -- a ruling that would be overturned by the U.S. Supreme Court in 2005.

Volcker became a critic of the Fed’s response to the financial crisis after the central bank orchestrated the sale of Bear Stearns Cos. to JPMorgan Chase in March 2008 by taking some of Bear Stearns’s riskiest assets on to the Fed’s own balance sheet. The central bank was operating at “the very edge” of its legal authority, he said in an April 2008 speech to the Economic Club of New York.

He also challenged the easy-money policies under Greenspan, without attacking his successor by name. In an October 2008 interview with Charlie Rose, he said, “We bent over backwards to ease money for reasons I didn’t understand.”

In 2013 he formed the New York-based Volcker Alliance, an organization aimed at rebuilding public trust in government and enhancing the effectiveness of public administration.

Volcker had two children, Janice and James, with the former Barbara Bahnson, whom he married in 1954. Her severe arthritis and diabetes kept her in New York during her husband’s tenure as Fed chairman, and he would commute home from Washington on weekends. She died in 1998. In 2010, Volcker married his longtime assistant, Anke Dening.

--With assistance from Christine Harper and Justin Sink.