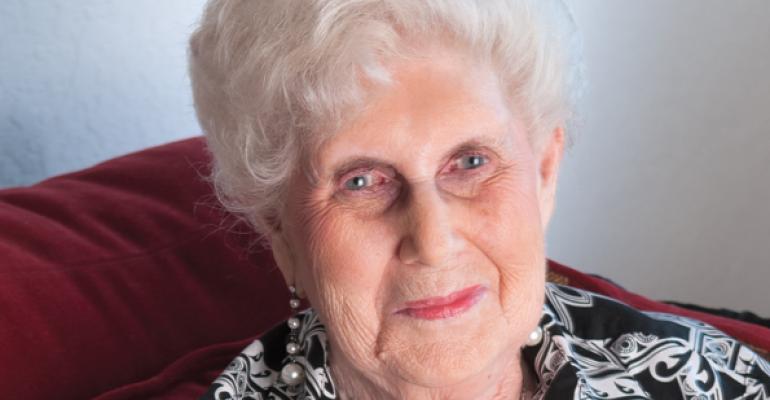 Over half a century (and counting) working as a financial advisor, Laura Baron, 93, has seen the industry transformed. But, she says, it’s still a man’s world.

In an industry with few documented heros, Laura Baron stands out.

She was a secretary at Oppenheimer & Co. in the 1950s when a forward-thinking manager found her “too sharp” for the work. He suggested she get her license and try working as an advisor. Baron liked the idea.

Over half a century later, the 93-year-old Baron is still at it, putting on high heels and a dress skirt and driving in to Wells Fargo’s Coral Springs office twice a week to keep in touch with clients—many of them widows—and help manage a $3 million trust. She may be the oldest practicing female financial advisor in America.

There was a time when it may have seemed she was the only female financial advisor in America. She was the lone woman in the room when she showed up for the series 1 examination in the late 1950s. The proctor assumed she was lost. When Baron said she was indeed there to take the exam, the proctor made everyone wait while he found a phone, called his supervisors and confirmed that it was ok for her to be there.

“It was a tough time,” Baron said. Men dominated the industry and weren’t always welcoming to females trying to break in.

But in 1959, 16 years after women were first allowed to work on the trading floor of the New York Stock Exchange, Baron earned her license and joined the now-defunct Edwards and Hanley as a stockbroker.

With no book of business, Baron’s managers worked out a unique deal unlikely to be given to any male colleague. She could work as a secretary in the morning, then at noon start hitting the phones to try and build her book of business.

It went that way for the next six months. Baron answered phones and took messages in the morning and started cold calling after lunch. She would go home, cook dinner for her family and then spend the rest of the night continuing her calls.

“For a female making these cold calls, it was extremely difficult,” Baron said. Many times a prospect’s wife would answer and mistake her for a secret “girlfriend.”

Of course, many clients refused to work with Baron because she was a woman. She finally found one male client who gave her a break, because, he told her, “she was a woman in a man’s world.”

In the office, her colleagues also tested her determination. “There were 11 men in my office and every one of them truly disliked me,” Baron said.

To resolve the issue, Baron told all of them to choose from amongst themselves who would serve as her associate; having a male associate smoothed things over with clients and other colleagues.

“I was a very accomplished trader,” she said, but noted she had to work twice as hard as her male colleagues. She was recognized as the “Woman of the Year” in 1966 by the New York Stock Exchange for having gained a “substantial” book of business over the course of only a few years.

As her career advanced, so did technology. When she first started, Baron said brokers had to write everything down, complete piles of paperwork, read ticker tape and use chalkboards to track price changes.

“It was very taxing,” Baron said, but added that the integration of technology such as personal computers and digitally updated stock changes was never an issue for her.  Firms had to have the latest technology, Baron noted. While at times learning the new systems was a challenge, it was never overwhelming.

It’s not just the technology that’s changed, Baron said. The business is different, she insisted. There were so many different funds now and companies that seem to have “sprung up overnight. It was a whole different way of buying stocks.”

As she aged she noticed that many female friends and neighbors were becoming widows with no idea what no investments their late husbands had made or how to manage them. “A lot of women never learned to say no,” Baron explained.

To help, Baron gave seminars, showing women how to manage a portfolio and signs to look for when choosing a financial advisor. She helps her clients—now mostly seniors—transition their portfolios from securities to the more conservative bond market.

Following her successful battle against lung cancer four years ago, her second recovery from the disease, Baron’s doctor ordered her to retire.  Instead, Baron began shifting over her book to a younger colleague and decreasing her days in the office. She has no desire to completely give up the thrill of the workplace.

“You get up in the morning, get out and stay active,” Baron said of her strategy for remaining in the game.

“She’s been an amazing person to work with and a great friend,” said her colleague Robert Henrici, adding that her experience and knowledge of the industry has been invaluable to other advisors in the office.

And yet, Baron notes, it is still a man’s world. Today, there is just one other female broker in the office.

*Check out more information on Laura Baron and other working advisors over the age of 90.