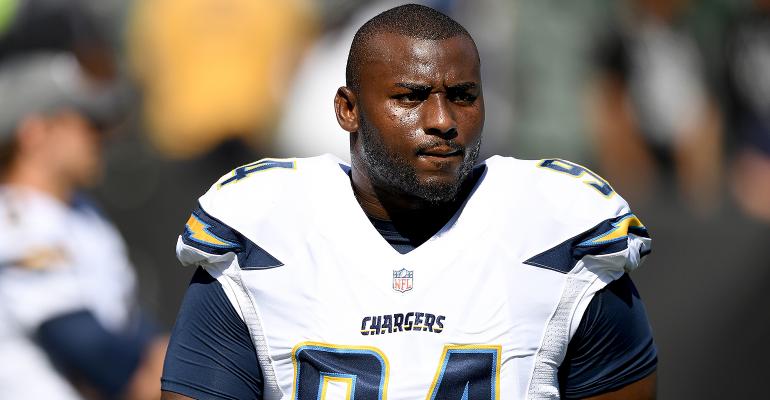 NFL star Corey Liuget said he bought into a pitch by Donald Blakstad, who is on trial for insider trading and defrauding investors.

Liuget told a federal jury in Manhattan he first met Blakstad at Greystone Steakhouse in San Diego -- where Japanese Wagyu steaks go for $26 an ounce -- and the investment fund owner pitched a proposal for Midcontental Petroleum. Liuget went on to invest $150,000 and said he hasn’t seen a penny of it since.

In 2015, Liuget signed a five-year contract extension with the then-San Diego Chargers, who had picked him in the first round of the 2011 NFL draft, for more than $50 million. He said he and his financial adviser went out to celebrate and met Blakstad and some others at the steakhouse.

Blakstad talked up Midcontinental Petroleum, explaining that laws California may implement would be a boon for renewable energy and that the company was working on an energy storage project, Liuget told the jury. A prospectus for the investment that Liuget read excerpts from described the investment funds as being used for business related to the oil and gas industry.

“From my understanding, my entire investment would go toward that,” Liuget said.

Blakstad’s lawyer Eugene Iredale said earlier that his client had used one bank account for all business and personal expenses, and that the investment fund owner had used money, including his own, toward making an unsuccessful offer to buy a phone company.

Shawn Johnstun, a Park City, Utah-based general contractor, told the jury he and a partner invested $100,000 in Midcontinental in 2014. Johnstun, who described himself as a friend of Blakstad, said he did business with the investor before, including a profitable real estate deal. Johnstun said he and his business partner asked for half their investment back and received the money.

The trial is scheduled to resume Monday because the court will observe the new federal holiday of Juneteenth on Friday, U.S. District Judge Edgardo Ramos said.

--With assistance from Chris Dolmetsch.