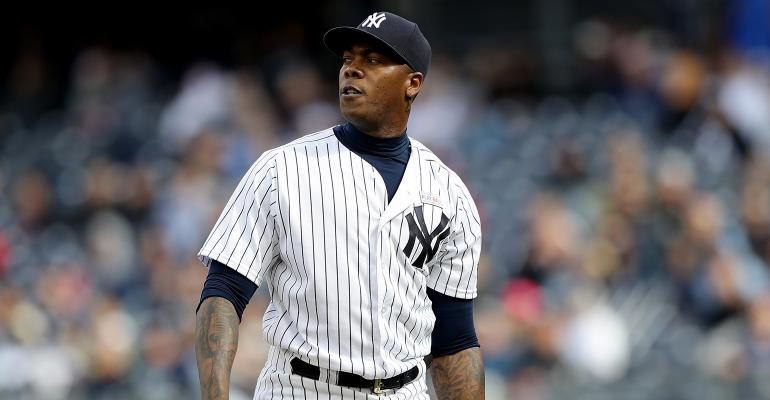 New York Yankees pitcher Aroldis Chapman is facing a handful of challenges this year, one of which involves a financial advisor who allegedly embezzled millions from him to fund lavish purchases for himself and his exotic dancer girlfriend.

Back in September, Chapman, 32, was punished with a two-game suspension set to occur next season for throwing a fastball at an opposing player’s head. More recently, in October, he filed a lawsuit in the 17th Judicial Circuit Court in Broward County, Fla., against Pro Management Resources, a commission-based financial services firm in Coral Springs, Fla., for embezzling more than $3 million.

He also claims PMR owner Anthony “Tony” Chiricosta helped conceal Zavala’s bad deeds when he failed to immediately notify Chapman of the issue and withheld documentation and information that might be incriminating.

Chapman was born and raised in Cuba and moved to the U.S. when he signed with the Cincinnati Reds in 2010. He's now under a three-year, $48 million contract with the New York Yankees, according to Spotrac.com.

As someone who neither speaks fluent English nor has much comprehension of accounting and investing, Chapman turned to PMR in 2011 as his business and financial manager because of Chiricosta and Zavala's professional backgrounds and their ability to speak Spanish.

PMR’s malpractices started in 2016, according to the suit. The advisory firm, which is not registered with FINRA or the SEC, often paid Chapman’s third-party bills late, citing cash-flow issues. And to mitigate that, Chiricosta and Zavala encouraged Chapman to take out eight-figure, high-interest-rate personal loans in 2016 and 2017.

Zavala began embezzling funds that same year. He would often unlawfully transfer funds from Chapman’s accounts to himself, Chandler Costa, an exotic dancer he met at a “nightclub” and with whom he formed a romantic relationship, and Chandler’s brother, Derrick Costa. He also used Chapman’s personal American Express card, along with the cards he opened in Chapman’s name at Chase Bank and Saks Fifth Avenue, to purchase luxury items for himself, Chandler Costa and Cassandra Aguilar, another person with whom he was involved who worked as a bartender at a nightclub.

Chiricosta is said to have had no knowledge of Zavala's actions because Zavala misrepresented the use of the funds to seek Chiricosta’s approval.

Chiricosta learned of Zavala’s scheme when a Saks Fifth Avenue gift card for $6,500 arrived by mail to PMR’s offices. He questioned Zavala about the gift card and Zavala confessed after initially saying it was Chapman’s. However, Chiricosta delayed telling Chapman about Zavala, and when he finally shared the bad news, he provided limited details to Chapman in hopes of maintaining him as a client.

The All-Star pitcher requests a court order that PMR turn over a detailed accounting of the transactions and financial activities that occurred under PMR’s care; a disgorgement of all commissions, fees and compensation charged to him; and another disgorgement of all funds that were misappropriated by Zavala, Chandler Costa, Derrick Costa and Aguilar.