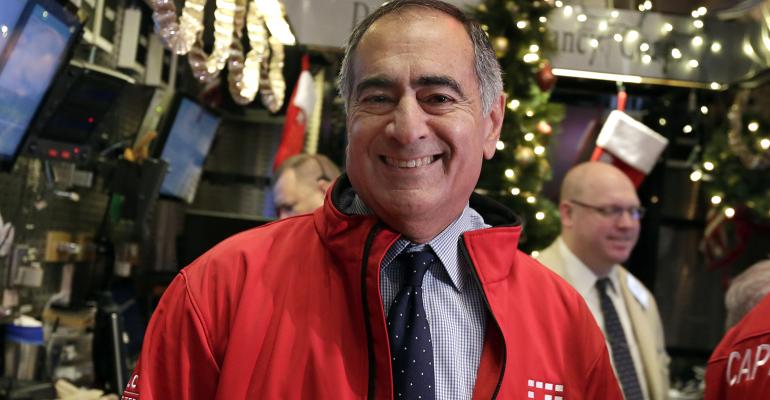 (Bloomberg) -- John Mack, a crisp, red windbreaker over his business suit, climbed the dais at the New York Stock Exchange to hail the coming revolution.

It was December 2014, and, like Mack, the Big Board’s colonnaded facade wore the signature red of LendingClub Corp., the precocious company determined to upend the status quo on Wall Street.

That Mack, the elder statesman of Morgan Stanley, applauded as this arriviste went public might have seemed like an act of class betrayal. After all, the opening bell tolled a victory for the leader of a hot new industry bent on cutting banks out of banking.

What was Mack up to?

That question burns as Mack, 71, finds himself in the center of the storm at San Francisco-based LendingClub, the avatar of “peer-to-peer” lending.

The answer, pieced together from public documents and interviews with people close to LendingClub, is a cautionary tale of a disrupter and the disrupted: Almost from the start, the venture -- like many of its rivals -- sought to embrace the very establishment it was supposed to challenge.

Behind the LendingClub drama is a cast of Wall Street actors, with Mack starring in roles of counselor, promoter and personal investor. Together, these players opened doors to critical funding, including from wealthy investors and a Wall Street machine eager to control -- and profit from -- a fast-growing corner of financial technology, or fintech.

Now, those alliances are fraying as LendingClub struggles to contain the damage following the resignation of its chief executive officer, Renaud Laplanche, amid questions about the company’s business practices and disclosures. Morgan Stanley’s clients and mutual funds are among the biggest losers, collectively ranking as the third-largest holder of a tumbling stock, after hedge-fund firm Sands Capital Management and investment manager Baillie Gifford & Co., data compiled by Bloomberg show. The controversy also is casting doubt over the prospects of other peer-to-peer lenders that have come to depend on Wall Street funding.

“Many people expected the wheels to come off at some point,” said Robert Wardrop, executive director of the Cambridge Center for Alternative Finance, which studies funding systems that don’t depend on regulated banks and capital markets. “The big surprise, clearly, was that this was an event that happened at a top performer.”

The story thus far traces the familiar arc on Wall Street from innovation to wild exuberance to disillusionment. It also includes some familiar faces. Among them are Mack, chairman emeritus of Morgan Stanley, as well as a LendingClub board member; fellow director Mary Meeker, his “ Queen of the Net” during the 1990s; and Arthur Samberg, his old associate at Pequot Capital Management, once the world’s largest hedge fund.

Given the uproar, people close to LendingClub spoke on the condition they not be named. Mack, Meeker and Laplanche declined to comment for this story, and Samberg didn’t respond to messages seeking comment.

LendingClub shares only made up about 1 percent to 2.5 percent of assets under management in strategies that included the stock on March 31 at Morgan Stanley investment management, according to bank spokeswoman Mary Claire Delaney.

“We have an outstanding board,” LendingClub said in a statement. “We’re proud to have Mary Meeker and John Mack as part of it for the experience and perspectives they bring.”

And though Mack maintains the title of advisory director at Morgan Stanley, he isn’t an employee there.

LendingClub’s ties to the investment bank reflect a trend across the teeming fintech landscape. Dozens of startups are seeking to rapidly expand their businesses by partnering with the traditional financial firms they’re trying to supplant.

For Morgan Stanley, this much is clear: It did well for itself on the way up, but some of its clients have lost on the way down. Long a top banker to the biggest names in technology, the firm collected millions of dollars in fees by extending loans to LendingClub and shepherding it onto the Big Board, company filings show. The newly public company’s market value initially jumped, briefly surpassing $10 billion.

Over the past year, as the market’s exuberance began to falter, Morgan Stanley and its money-management unit snapped up shares, amassing more than 34 million, mainly in mutual funds. Since mid-December, the bank’s analysts issued no fewer than six bullish recommendations for the stock before they withdrew the rating last week, data compiled by Bloomberg show. Their view was shared by more than half their peers. The price tumbled 66 percent in that five-month period. Once worth $29.29 in December 2014, it closed at $3.99 on Wednesday, with a market value of $1.5 billion.

It’s been a long, white-knuckled ride. Laplanche, a former Wall Street lawyer, founded LendingClub in 2006 as a sort of match.com of loans. The idea was to pair ordinary people looking to borrow money with ordinary people look to lend it. LendingClub would use proprietary algorithms to vet borrowers, collecting a fee on every match.

Mary Meeker was an early fan. Morgan Stanley’s diva of the dot-com years, Meeker decamped for Kleiner Perkins Caufield & Byers in 2010, placing her at the center of Silicon Valley’s venture capital scene.

As Mack would later tell CNN, he began experimenting with LendingClub loans personally after learning about the company from Meeker. He liked what he saw.

By 2012, with business taking off, Laplanche went looking for a Wall Street fixer to join the board. His company could benefit from traditional banks, and vice versa.

He scoped out candidates from several major firms, including Goldman Sachs Group Inc., according to people familiar with the matter. Mack -- whom Laplanche would later tell American Banker was a “happy customer” of LendingClub -- said yes. He also invested $2.5 million in the company.

Laplanche was on cloud nine over Mack’s arrival, one person close to the matter said. A few months later, Meeker joined him on the board, and Kleiner invested $15 million. Next came Lawrence Summers, the former U.S. Treasury secretary. He had been referred by Dave Goldberg, then head of SurveyMonkey Inc. He’s the late husband of Sheryl Sandberg of Facebook Inc., which Morgan Stanley had taken public in 2012.

“What CEO wouldn’t be thrilled to have John Mack join their board?” LendingClub said in its statement. Sandberg declined to comment and Summers referred questions to LendingClub.

Before long, Mack was helping LendingClub access key sources of funding via the customers of Morgan Stanley’s wealth management division, efforts he described to Bloomberg in 2013. Morgan Stanley brokers offered clients a chance to invest in funds overseen by a LendingClub subsidiary, LC Advisors, which purchased LendingClub loans. The reciprocal relationship helped underpin demand for the loans, the person said.

“Financial advisers are fascinated by this business and its returns,” Mack told CNN in April 2012. “I wouldn’t be surprised if some start putting $15 million to $20 million in this.”

Morgan Stanley’s private-banking clients probably account for less than 1 percent of all of LendingClub’s loans outstanding, the company said, while declining to give figures for LC Advisors.

Wealthy individuals were just the start. With Mack on board, two Morgan Stanley employees with experience drumming up institutional investors signed on at LendingClub.

Jeff Bogan, a former investment banker, was hired to help prepare the company for its public stock offering. But his Wall Street pedigree soon landed him in a different role, dealing with big buyers of LendingClub loans. Within the company, he was perceived as a Mack ally, though it doesn’t appear they were close, according to two people familiar with their relationship. Also arriving from Morgan Stanley was Adelina Grozdanova, another investment banker.

“We employ individuals from Morgan Stanley as well as many other prominent financial institutions,” LendingClub said in its statement.

By December 2014, Laplanche was ready to take LendingClub public. Morgan Stanley won top billing on the deal. It and other advisers shared about $50 million in fees, data compiled by Bloomberg show.

Amid the celebration at the NYSE that December morning, Mack spoke to Samberg, his old colleague at Pequot. Mack had left that firm in 2005, and while Pequot later drew scrutiny for trades, Mack was never accused of wrongdoing.

At the NYSE, Samberg suggested an opportunity to profit while powering LendingClub. He later introduced Mack to Andrew Hallowell, head of Arcadia Funds LLC, a Burlington, Massachusetts, manager of investment funds. The key would be a hedge fund-like partnership, Cirrix Capital, whose potential beneficiaries would include Mack and Laplanche, according to a person familiar with the matter.

If all went well, Cirrix would be lucrative for the inside investors. Mack and Laplanche are in a class of limited partners who, at the end of each quarter, collect a 4 percent annualized return before profits are shared with general partners, regulatory filings show. After that, they get 80 percent of remaining gains, according to a March 2016 filing. Other benefits available to limited partners included lower advisory fees. Hallowell didn’t respond to messages seeking comment.

For Laplanche, the investment would contribute to his downfall more than two years later. On May 9, the company said he resigned after failing to properly disclose his stake in Cirrix. People close to the situation said he omitted that detail in a written presentation while pushing the board’s risk committee this year to invest LendingClub’s own money in the fund.

Directors also grew frustrated in recent weeks with his perceived lack of candor during an internal review of a botched loan sale, the people said. The review found LendingClub had sold $22 million of loans to Jefferies Group that didn’t meet the buyer’s criteria. On $3 million of loans, application dates had been altered. LendingClub has said it repurchased the debts and sold them to another investor. The board sought Laplanche’s resignation, people familiar with the matter said.

“I recognize that events occurred on my watch where we failed to meet our high standards,” Laplanche said in a statement this week. “While there are disagreements as to the characterization of facts, I accept that the board acted in good faith.”

Mack wasn’t involved in the risk committee’s decision to invest in Cirrix, according to people with knowledge of the situation. He hasn’t been accused of impropriety.

Bogan and Grozdanova resigned after the botched loan sale, according to one person. Neither has responded to messages seeking comment.

The SEC and Justice Department are now investigating the events that led to LendingClub’s shakeup, the company said in a May 16 filing. New York’s bank regulator also is examining loans the company arranges for consumers and its ties to financial firms, a person familiar with that case said Wednesday.

The question now is whether the turmoil at LendingClub will scare away money managers, hedge funds and banks that have been snapping up loans and supercharging the industry’s growth. Many rival loan platforms have been tending their own Wall Street alliances to ensure funds keep flowing.

On Deck Capital Inc., which focuses on small-business lending, is working with Goldman Sachs and JPMorgan Chase & Co. Avant Inc. has teamed up with Jefferies, JPMorgan and Credit Suisse Group AG.

As for LendingClub, “the biggest unknown at this point is how institutional investors will respond,” Morgan Stanley analysts wrote in a note May 10, suspending their rating. “We think the reputational risk could be meaningful to institutional investor demand and could take months to become fully apparent. The range of outcomes from here could be very wide.”