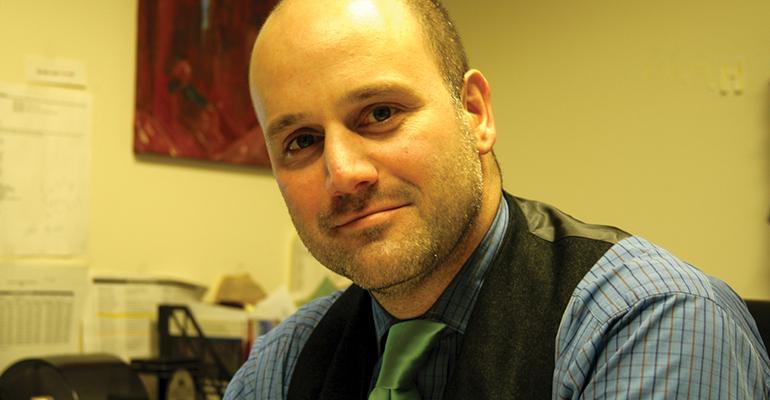 David Aldo Geracioti, a financial journalist and editor who in 2001 revived Registered Rep. magazine, a publication for financial advisors, and guided its publication for nearly 12 years, died on September 3, 2017. He was 54.

Geracioti was raised in Toledo, Ohio, the youngest of three sons of the late Dr. Thomas Geracioti and Carol Jean (Neidhardt) Geracioti.

He graduated from St. John’s Jesuit High School, whose rigorous, classical curriculum would eventually lead to an abiding interest in books, ideas and the creative arts. He went on to attend the University of Michigan, graduating in 1984 with a B.A. in philosophy. While in Ann Arbor, he was in regular attendance at the Big House, and an active member of the Psi Psi chapter of Sigma Chi, and remained lifelong friends with many of his fraternity brothers.

After his undergraduate days, Geracioti enrolled at the graduate school of journalism at New York University before landing his first position in journalism, at the Trentonian, a newspaper in the New Jersey capital. As a metro reporter at a tabloid newspaper, his beat ranged from grisly crime scenes to municipal politics.

In 1991, he traded beat reporting for financial topics, becoming a senior editor at Individual Investor magazine, one of the first mass-market publications aimed at the active retail-investor audience. While there, he led coverage of some of the most dynamic aspects of Wall Street and the economy, including the emergence of the Internet and the rapid expansion of the cable-TV and entertainment industries.

After six years helping to build the magazine from a startup to a national publication with 500,000 subscribers, he left in 1997 to join Smart Money magazine, which was then a newly launched joint venture between Hearst Magazines and The Wall Street Journal. His work there included profiles of professional money managers and articles offering investment advice.

In 2001, Geracioti was hired to revitalize Registered Rep., a decades-old trade magazine for financial advisors. Under Geracioti’s leadership, the publication underwent an exhaustive redesign and rebranding, and launched an integrated website for advisors and wealth managers. For nearly 12 years, he expanded circulation, hired and nurtured a team of talented writers and editors, and became a regular speaker at industry trade shows. In line with the digital transformation across publishing, Registered Rep. was renamed WealthManagement.com in June 2012. His spiritual DNA continues to run through the publication, according to WealthManagement Editor David Armstrong.

“He hired me, as well as many others here,” Armstrong said. “He was a great mentor, and reporters here and at many other publications and media companies owe their careers to David.” “David was a smart editor and true wit, plus a very colorful personality,” said Warren Bimblick, former group president at Penton Media. “He was able to mix messages that made sense, and combine colors and patterns in a sartorial splendor that no one else could ever pull off. The January 2002 issue that changed The Registered Representative to Registered Rep. was a groundbreaking achievement in financial journalism. On the cover was a smiley face reading The Wall Street Journal, a good indication of David’s sense of humor. David is missed.”

Geracioti was the proud father of daughter Grace Geracioti, a recent graduate of Colorado College, and son David W. Geracioti, an undergraduate at Denison University.