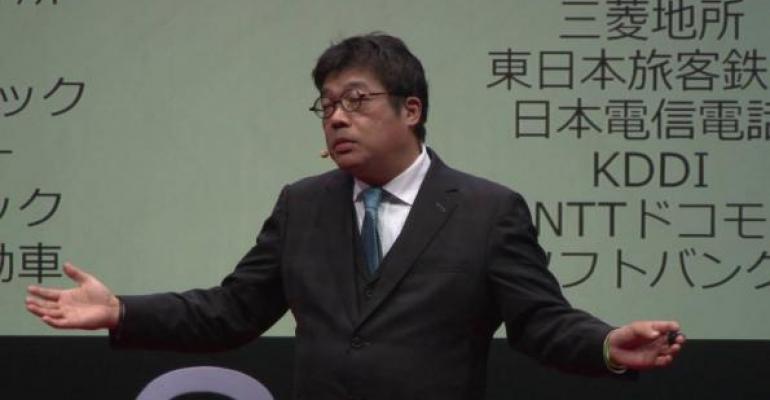 (Bloomberg) -- The 3,240 yen ($31) of cash framed on Hideto Fujino’s desk is a constant reminder of his greatest humiliation.

The money, barely enough for dinner at the Thai restaurant downstairs from his office, was Fujino’s payout from a 2009 fire sale of the asset management firm he built from scratch. As clients fled during the global financial crisis, Fujino was forced to unload his stake in Rheos Capital Works Inc., give up his role as president and go back to being an employee for the first time in almost six years.

Like the famous Japanese shogun who carried a portrait of himself after losing an important battle, Fujino wants to never forget. “This is my version,” he said in an interview at Rheos’s headquarters, overlooking Tokyo Station in the center of Japan’s capital.

Today, the framed memento is one of the few vestiges of Fujino’s darkest period. Rheos Capital’s flagship Hifumi fund is beating 97 percent of peers, the firm’s assets under management just surpassed 200 billion yen and Fujino has reclaimed his title as president and chief executive officer. He bought back 25 percent of the company with other directors and staff in December, and they plan to eventually purchase the rest.

Fujino, a former high-flier at Goldman Sachs Asset Management, was already a standout in risk-averse Japan after he left a comfortable career to strike out on his own. But the 50-year-old’s road to redemption has made him something of a legend in a money management industry still struggling to reclaim its glory days almost three decades after the nation’s stock bubble deflated.

“He’s an artist,” said Ken Shibusawa, chairman of Commons Asset Management Inc. and the great-great grandson of the founder of Tokyo’s stock exchange. “Even if others tried to do what he does, they wouldn’t be able to.”

The Hifumi fund has gained an annualized 22 percent over the past five years, beating 97 percent of peers tracked by Bloomberg. It’s down just 2.5 percent in 2016, versus an 11 percent drop for Japan’s Nikkei 225 Stock Average, and has returned 231 percent since inception in 2008.

While most Japanese equity managers stick to blue-chip companies in the Nikkei 225, Fujino targets smaller firms. He looks for businesses with steady double-digit earnings growth, a reasonable stock price and a switched-on management team. And despite his affinity for trendy gadgets (Fujino wears an Apple Watch on his left arm and a Misfit Ray fitness tracker on his right), the Hifumi fund’s tech holdings tend to be low-profile.

“I like plain, dull companies,” said Fujino, who’s written more than 20 books about investing. “Famous, flashy ones tend to be overpriced.”

The Hifumi fund’s largest position is Ai Holdings Corp., a low-frills seller of office equipment and security cameras. The Tokyo-based company has increased earnings per share by more than 30 percent in each of the past three years, fueling an almost six-fold gain in the stock since mid-2012. Ai’s chief executive officer owns about a fifth of the company and takes a long-term approach toward investment and acquisition decisions, Fujino said. Ai’s shares fell 0.5 percent in Tokyo on Monday, while the MSCI Asia Pacific Index slipped 0.1 percent.

Ai is an exception in Japan, according to Fujino, who said most of the country’s businesses are run by risk-averse managers or rich owners who’ve lost their edge. He recalled the chief of a karaoke company he met about five years ago: “I asked him what he likes doing lately and he said walking his dog,” Fujino said. “Most leaders in Japan are dead.”

While about two-thirds of the Hifumi fund’s investments are small-capitalization growth stocks, the rest are tied to macroeconomic themes. Fujino says he’s currently shifting from defensive to offensive mode, buying companies like Mitsubishi Corp., a beneficiary of rising commodities, and Komatsu Ltd., a bet on stronger global demand for construction equipment.

Fujino graduated from Tokyo’s prestigious Waseda University in 1990 before spending about a decade as a small-cap manager for Nomura Asset Management Co. and Jardine Fleming Asset Management Ltd. He joined Goldman Sachs Asset in 2000, then left to start Rheos three years later.

“I was working for very reputable companies,” said Fujino, who inherited his work ethic from a mother who sold bras until she was about 70. “My pay wasn’t bad. If I only cared about money, then I should have stayed.”

But he had ambitions to create the “gold standard” for Japanese funds, dismayed by what he saw as an overly short-term approach in the industry.

While his money-management startup attracted big institutional investors like Norway’s sovereign wealth fund, Fujino wasn’t prepared for the financial crisis. The firm had just invested much of its own cash in setting up a new mutual fund. And when withdrawal requests flooded in, Rheos couldn’t cover them. Fujino and his partners turned to financial group IS Holdings Co. for fresh capital, unloading their stakes for a pittance in the process.

Fujino admits that even now, Rheos wouldn’t be immune to another “dramatic” financial crisis. But he says the firm is better prepared after widening its client base to include Japanese individual investors, some of whom buy on market dips. During shocks caused by Japan’s 2011 tsunami and China’s currency devaluation in 2015, the Hifumi fund saw inflows.

Rheos, one of the few large independent fund managers in Japan, has adopted a novel approach to expand its reach. On top of marketing its funds directly, the firm has convinced about 20 regional lenders to distribute its products, almost unheard of in a country where banks typically prefer funds from asset managers within their own corporate umbrella. Rheos clients sourced through regional lenders now make up more than 20 percent of the company’s assets under management.

Fujino, who wears glasses in the style popularized by John Lennon to help counter Japanese stereotypes of intimidating asset managers, says he hopes to keep expanding his roster of local and foreign clients, including pension funds and endowments in the U.S.

As for the framed cash, it’s staying on his desk at home.