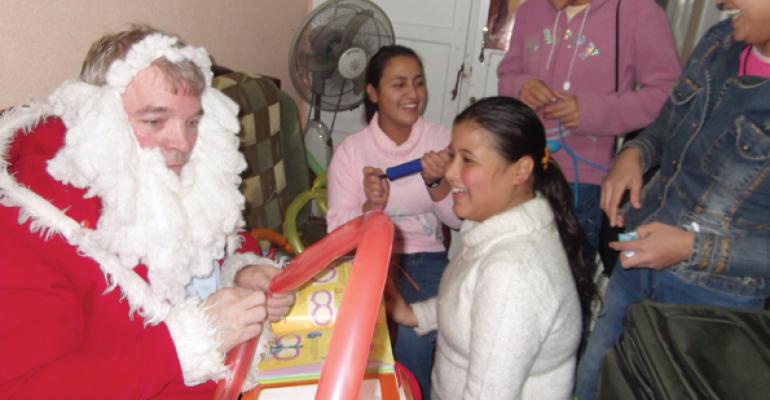 Going to Egypt to see the pyramids was always on Doug Myers’ bucket list.

So in 2009, he and his wife Suzy Burke-Myers, who’s of Egyptian decent, booked a trip. While there, the couple took a side trip to Zagazig, the town where Burke-Myers was born. Her family introduced them to a girls’ orphanage in the town run by the Charities for Orphaned Girls. Myers was struck by the poverty he saw.

“We just felt compelled to say, ‘What should we do here?’”

They emptied their pockets. They bought the girls dresses, shoes and bedspreads. Of course it wasn’t enough. Once they returned home, the gifts started getting larger: a new stove, a bus.

When the building that housed the orphanage was condemned, Myers stepped up and funded a new one. He and his wife have personally donated $200,000 to the orphanage, as well as another one in the same town that houses boys—they are slated to get a 25-seater bus in June.

Four floors of the finished orphanage will house about 50 to 75 girls. Two floors will be used for medical purposes, one for widows with no family support, one floor to rent to university women to help tutor the young orphans, and one floor to rent for weddings or funerals to generate some income to maintain the building. It is slated to open in August.

Whether or not Myers will be there when it opens, as he’d like, is another story. Since the revolution that deposed former president Hosni Mubarak, there have been violent clashes in the streets between opponents and supporters of the new government, and it’s not a safe destination.

“It’s getting worse over there, yet discreetly, without making any fanfare, they’re finishing this building,” Myers says. “It’s going to be something that may save their life or keep them safe off the streets as the violence or unrest grows.”

He hopes to eventually get the girls tutors, which should increase their chances of going to college, and begin funding similar programs in other cities of Egypt, perhaps starting with Luxor.

“It’s not his family background, and yet he is putting so much money toward a cause for people that can’t speak for themselves,” Burke-Myers says.