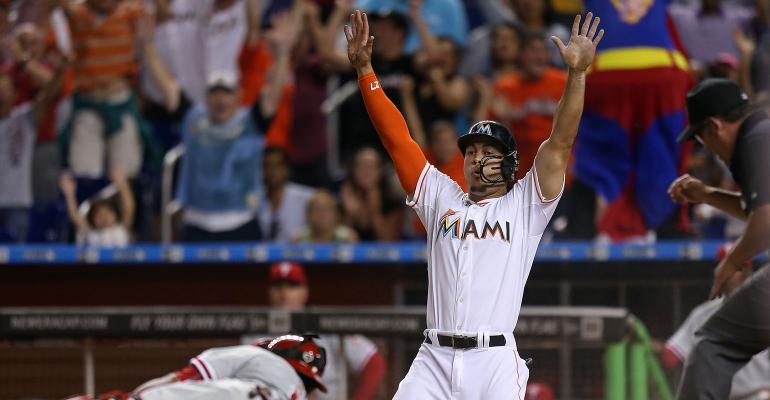 A familiar name is representing Derek Jeter in his bid to buy the Marlins, adults don't care about economic cycles anymore and the value of vinyl.

Former Morgan Stanley wealth management chief Greg Fleming is representing former New York Yankee Derek Jeter in talks to buy the Miami Marlins Major League Baseball franchise. Fleming, who left the bank in January 2016, runs his own investment banking boutique. Jeter, who won five World Series championships with the Yankees during his career and has a seven-bedroom, nine-bathroom house in Tampa, Fla., on the other side of the state, is one of three bidders for the Marlins. The other groups include former Florida Gov. Jeb Bush(!), who is teaming with Citigroup to finance his bid and another group of unnamed businessmen who have the financial backing of Goldman Sachs, Fox Business is reporting. The Marlins have been owned by art dealer Jeffrey Loria since 2002. He paid $158 million for the team then and is seeking to sell it for up to $1.6 billion. A study by Northwestern Mutual showed fewer adults in the U.S. seem to care about economic cycles. The study surveyed 2,700 participants this year (age 18 and older) and only 50 percent of them said they needed a financial plan that anticipates economic cycles, down from 57 percent in 2016. The change isn't exactly timely, given many believe the current bull market is long in the tooth.

Many baby boomers likely have a box full of vinyl records stashed away and forgotten in an attic somewhere. And, just like those baseball cards that you wish your mom didn’t throw away 40 years ago, those records could be worth something. How much? Upwards of $10,000, according to a recent list of the most expensive records ever sold by Mrgamez.com. Coming in at No. 1 is, somewhat surprisingly, The Sex Pistols, whose 7” “God Save the Queen” single from A&M Records, without a sleeve, sold for $10,578.