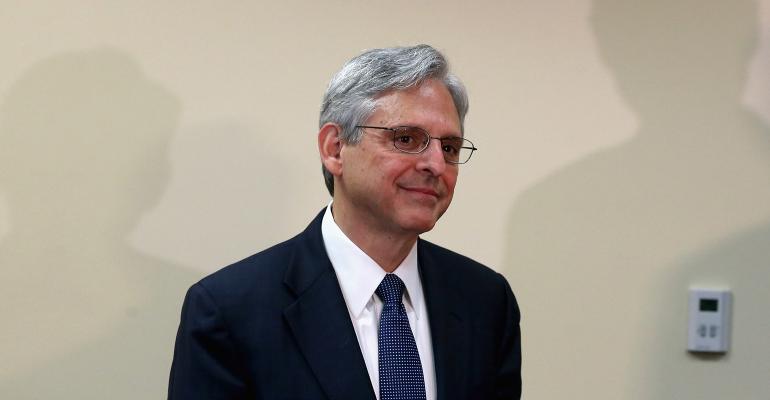 Garland Stepped Aside in 66 Cases Because of Financial Holdings

(Bloomberg) -- U.S. Supreme Court nominee Merrick Garland disqualified himself for financial reasons from 66 cases that came before him as an appellate judge, stepping aside in clashes involving climate change and mutual funds.

Garland disclosed the recusals in a 142-page questionnaire the White House submitted to lawmakers Tuesday in a bid to jump-start the nomination. Garland accumulated the disqualifications during 19 years as a federal appeals court judge in Washington.

The White House also provided Garland’s most recent financial disclosure form, which indicates he or his wife owns a handful of individual stocks that might prompt additional recusals should the Senate confirm him to the nation’s highest court.

Stock holdings have proven problematic for the Supreme Court. Recusals have left the court shorthanded in important business cases, including a pending fight over Puerto Rico’s efforts to restructure billions of dollars in debt. Justice Samuel Alito isn’t participating because either he or his wife own shares in a fund that holds Puerto Rican municipal bonds.

Also, since 2009, Chief Justice John Roberts and Justices Stephen Breyer and Alito have inadvertently taken part in cases when they or a family member owned shares in a company that was involved.

Garland or his wife owned stock in General Mills Inc., Pfizer Inc., Bristol-Myers Squibb Co., General Electric Co., Procter & Gamble Co. and J.M. Smucker Co., according to his financial disclosure report. The report lists Garland’s assets as of Feb. 29, 2016, about two weeks before he was nominated to succeed the late Justice Antonin Scalia.

Senate Republicans have refused to consider Garland’s nomination while President Barack Obama remains in office, saying the next president should choose Scalia’s successor.

Garland’s questionnaire didn’t explain the precise reason for his recusal from the 66 cases, describing them only as "potentially affecting my financial holdings." In some instances, the connection between the disqualification and his financial holdings wasn’t clear.

The list included a high-profile clash over the Environmental Protection Agency’s power to regulate greenhouse-gas emissions. A panel of judges said in 2005 that the agency didn’t have to consider regulating those emissions. The full appeals court was asked to reconsider that ruling and, according to the court’s docket, Garland didn’t take part in the decision to reject that request.

The Supreme Court later reversed that ruling, clearing the way for the EPA’s current effort to reduce carbon emissions.

The questionnaire also listed a case involving a mutual fund governance rule issued by the U.S. Securities and Exchange Commission. A three-judge panel, not including Garland, upheld the rule in 2005.

The appeals court’s docket doesn’t mention Garland’s recusal in the mutual-fund case. D.C. Circuit Clerk Mark Langer said in an interview that the court’s standard practice is not to indicate that a judge has recused or to provide any reasons.

Supreme Court justices likewise generally don’t give explanations when they recuse themselves. Garland separately listed cases in which he disqualified himself for other reasons, including his involvement as a Justice Department attorney or in private practice.

"Should Garland be confirmed, I would hope that he not only continue to explain his reasons for stepping aside from cases but that he also place his shares of individual stock into a blind trust for the duration of his service," said Gabe Roth, executive director of Fix the Court, which advocates for increased transparency from the high court.