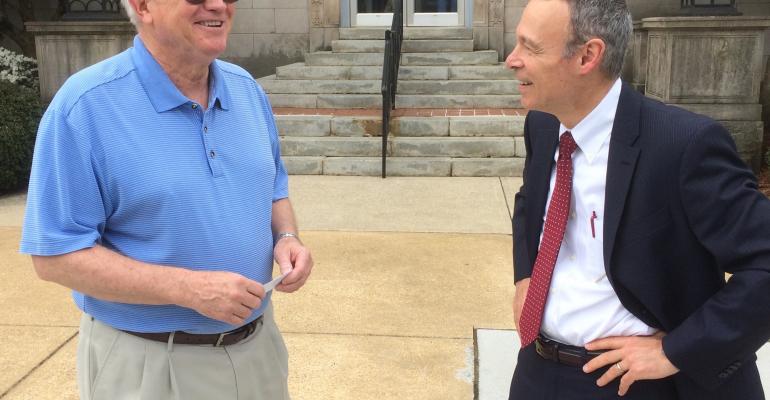 Andy Millard, a financial planner from Tryon, N.C., is seeking a seat in the House of Representatives for North Carolina’s 10th congressional district in 2016.

Millard, who currently runs Millard & Company, an independent RIA with about $82 million in assets, is well-known among the financial planning community, as a member of the Financial Planning Association and the National Association of Personal Financial Advisors. In his practice, he relies heavily on video to communicate with clients and prospects, and he often speaks to advisors about how they can use video marketing.

WealthManagement.com spoke to Millard about his campaign and what issues he plans to take to Washington.

WealthManagement.com: How is the campaign going? What made you decide to run for Congress?

Andy Millard: I am the definition of an underdog. I’m a Democrat running in a heavily Republican district. Most pundits don’t give a Democrat much of a chance in this district. But I think I’ve got some potential qualities that a lot of Democrats may not have. For one thing, I’m a financial planner. I’m a small business owner. I was a schoolteacher for years, and I was a school principal for years. My lifetime has been spent doing real things that real people do in the real world.

Every election comes down to a choice between two people. The contrast between myself and the incumbent is pretty stark when it comes to that sort of thing. One of the things I keep hearing over and over and over from people is that they are so tired of all the money that essentially runs the whole show in politics. I’m not going in there for a career as a politician; I’m not interested in a career as a politician. At the same time, as the underdog, I don’t have all the big money interests that the incumbent has. In a weird way, that can be an advantage. It certainly frees me from those constraints of having to get re-elected every year and having to kowtow to the people who write the big checks.

AM: His name is Patrick McHenry. He’s a Republican. He’s been elected six times in a row. Before the 2012 election, the lines of the district were redrawn, so that’s when my part of the state got pulled into this district. He’s 39 years old. Essentially he has worked in politics his entire adult life, so he is the quintessential career politician. He’s accepted $2.5 million in campaign contributions from large financial services companies, so he has no incentive to do things differently because so many of his campaign dollars have come from companies who have a vested interest in keeping things as they are.

WM.com: What made you decide to run for Congress?

AM: I’m a financial planner. As financial planners, when we sit down with a new client, first thing we do is a checkup—income, expenses, assets, liabilities. Look at the budget. If you’re spending a third more than you’re taking in every year, then we’re going to have a conversation about that.

Congress has not been doing that on a national level. They haven’t been doing a financial plan for the country. They do everything piecemeal.

The way Congress is currently set up, too many of the members have no incentive to do that. Their incentive is to get as much campaign cash as they can to get re-elected. As long as we keep sending the same people back, it’s not going to change. And I was like everybody else. I was the person who looked at it, shook his head and said, ‘That’s just terrible. Somebody ought to do something about that.’ Finally one day I looked at myself in the mirror and said, ‘You know what? Somebody ought to do something about that. Who do you expect is going to do it if you don’t do it?’

WM.com: What issues do you plan to take to Washington?

AM: Somehow we’re going to have to figure out a way to limit the influence of big money on politics. If you’ve got enough money, then you can buy yourself a Congress. And that’s just not right.

Another one of my issues is the unevenness of the playing field financially—for the middle class. Obviously, we see that as financial planners. So much of the things that the middle class has worked to build over the years have disappeared. 2008 was really the big Kahuna of financial disasters for so many people in this country. The stock market took a plunge; a lot of people lost money on that. So many people with their 401(k)s and their own personal savings don’t have the experience or the training or the savvy to be able to make those decisions ended up making bad decisions and have never recovered from that. So many homes have been foreclosed on. So many jobs have been lost and have never come back. All of those things are the things that have contributed to the shrinking of the middle class, and the middle class is what keeps us going.

WM.com: Are you still serving clients during the election?

AM: Yes. I’m spending about half time at Millard & Company and half time on the campaign.

WM.com: Were you able to solicit clients for fundraising?

AM: That was a made personal commitment that I made not to solicit clients for campaign contributions.

WM.com: Why did you draw that line?

AM: Clients didn’t sign up for a Congressional campaign. They signed up to be financial planning clients. If they want to get involved, they’re welcome to, but that’s totally up to them. It’s not an expectation.

WM.com: Are there any advisor-specific issues you might take to Washington?

AM: I’m a big proponent of the fiduciary standard. That is an issue that they’re debating right now in Washington. There’s a lot of support for the status quo from the companies that benefit from the status quo, and they’re huge—a lot huger than the forces that are arrayed for what I consider the better model, which is the fee-only fiduciary model.

Another thing, any advisor who’s working in this country will tell you that there’s a retirement crisis. A generation ago, the country quietly shifted the responsibility for each person’s retirement from the company to the individual. That was ok, but there was no corresponding education or preparation for that individual to handle that responsibility. The average value of a 401(k) account across the country is $16,000. That’s what we’ve saved as an average as a nation for our retirement? And we think that’s ok? I don’t think so.

There are a lot of folks who would say, ‘OK, let each person save their own money and then turn Social Security over to each individual to manage as a private investment account as well. That’s just compounding the problem. We can’t just say, ‘Well, Social Security’s no good. We need to get rid of it, turn it over to each individual to manage their own investments just like they do their 401(k).’ That is a huge disaster in the making if that ever comes to pass.