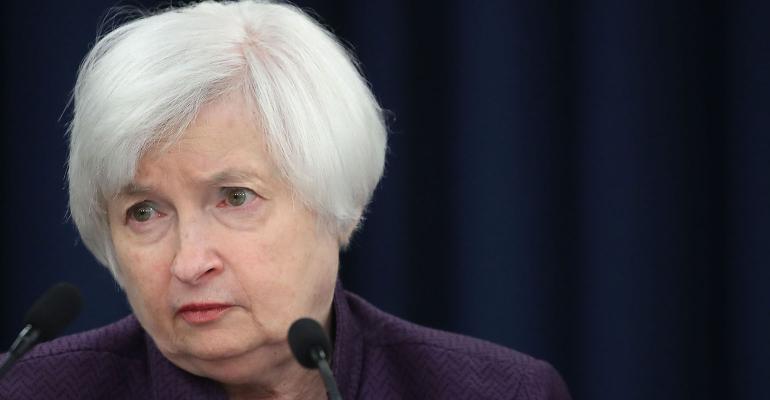 (Bloomberg) -- The Federal Reserve may be headed for a shakeup regardless of who wins the 2016 election, though Hillary Clinton is seen as less likely to demand radical change than Donald Trump.

Clinton, a Democrat, has called for greater diversity at the U.S. central bank, while defending the practice of recent U.S. presidents from both parties of not commenting on monetary policy. Trump has been vague on how the Fed should change, but has spurned the tradition of respecting its monetary policy independence. The Republican nominee has slammed it for keeping interest rates low, which he claims is designed to help cement President Barack Obama’s legacy.

Trump has already suggested that if he won the White House, he’d probably nominate someone else to lead the Fed once Chair Janet Yellen’s term expires in 2018. That creates “uncertainty as to who would be the nomination,” said Michelle Meyer, head of U.S. economics at Bank of America Corp. in New York. Clinton, on the other hand, would be less inclined to overhaul the 103-year-old institution. “I think she’d keep the Fed status quo.”

Lawmakers from both sides of the aisle have proposed legislation in recent years to limit the central bank’s authority, including a monetary policy audit for which Trump has voiced approval. Tweaking the Fed legislatively would require either bipartisan support in Congress or one party sweeping the election on Nov. 8 so that it commands both the House and Senate and can bulldoze through its reforms.

That means the most obvious change facing the policy-setting Federal Open Market Committee will come through the traditional power of presidential appointment. Both Yellen and Fed Vice Chairman Stanley Fischer will see their terms expire in 2018, and there are two existing vacancies on the seven-member Fed Board in Washington.

“I would think for Trump, you’re looking much more outside the box, at successful corporate raiders, successful hedge fund managers, people he may have had business relationships with,” said Aaron Klein, an economic studies fellow at the Brookings Institution in Washington and a Clinton supporter. While he declined to speculate on who Clinton would choose for Fed chair, he said that should she win “you’ll tend to see more continuity at the Federal Reserve.”

Any appointment will be subject to Senate confirmation, creating a potential check. Meyer and her colleagues at Bank of America wrote in a Sept. 29 note that “the biggest risk for change comes under a Republican sweep,” which would potentially pave a way for Trump appointments in the Senate.

There’s some speculation that changes to Fed leadership could come even earlier than 2018. Paul Ashworth, chief U.S. economist at Capital Economics in Toronto, said Yellen could resign if Trump were elected. Morgan Stanley strategists included a Yellen resignation as a possible post-election outcome in their election briefing earlier this year, though they rated it low-probability.

An abrupt departure would set a "bad precedent" and is unlikely, said Joseph Gagnon, a senior fellow at the Peterson Institute in Washington and a former senior Fed economist.

“I don’t think she’d want to encourage that,” he said.

Though legislative changes to the Fed will be harder to achieve, the 2016 Republican platform includes a plan to implement an annual audit of Fed activities and create a commission to “investigate ways to set a fixed value for the dollar.”

While Trump hasn’t explicitly endorsed the return to a system that backs the U.S. dollar with gold, his economic adviser Judy Shelton wrote in a Financial Times column on Sept. 28 that his running mate, Mike Pence, has urged a rethink of the international currency system and Trump has nodded toward the possibility.

“As Mr. Trump often urges: It is time to start thinking big once again,” Shelton wrote.

Economists agree that the gold standard is a failed and impractical system, and it would “take a Herculean effort of international coordination” to re-institute a metal-base for the currency, said Peter Conti-Brown, an assistant professor at the Wharton School of the University of Pennsylvania. It’s pretty improbable that Trump would try to reinstate it, he said.

If Clinton is elected, a different set of changes could be in store for the central bank.

The Democratic platform promises to protect Fed independence to carry out its dual mandate -- for low inflation and full employment -- against threats from new legislation. But it also said it would ensure bank executives don’t serve on regional Fed boards, and to “reform the Federal Reserve to make it more representative of America as a whole.”

The U.S. central bank consists of a Board of Governors in Washington and 12 regional branches.

“If Hillary Clinton is elected, there’s going to be widespread interest among members of the House and Senate in pursuing, at minimum, the aspects of Fed reform that are included in the Democratic Platform,” said Jordan Haedtler, one of the leaders of Fed Up, a progressive, grass-roots campaign aimed at reforming the central bank.

Clinton has called for greater diversity at the Fed, and a spokesman for her campaign said in May that “commonsense reforms -- like getting bankers off the boards of regional Federal Reserve banks -- are long overdue.”

There’s already a push in Congress to deal with these issues. Yellen regularly gets asked about Fed diversity when she testifies on Capitol Hill and Representative Joyce Beatty, a Democrat from Ohio, introduced legislation on Sept. 28 that would require the regional Fed banks to interview at least one diversity candidate when appointing new presidents.

Even absent congressional action, the Fed is actively working on diversity internally and that’s likely to continue under either a Clinton or a Trump administration. In fact, Clinton and her supporters may have a reason to avoid advocating for legislative reform of the Fed and let internal changes run their course.

“When you’re talking about the Federal Reserve and reforming it in any kind of way, it’s really taking the genie out of the bottle,” Conti-Brown said. Pushing structural changes to the Fed through Congress could open up the possibility of other proposals becoming law, including making it subject to a monetary policy rule, as some Republicans have advocated.

“There are lots of risks in doing wholesale governance reform, and I think the Clinton administration would be mindful of those risks,” he said.