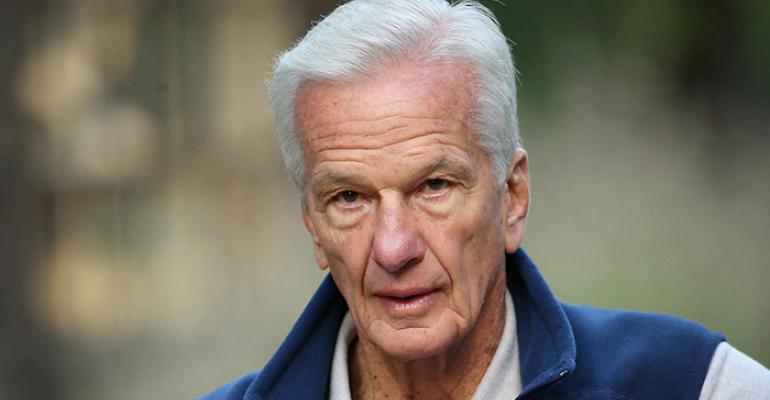 Jorge Paulo Lemann is due for another blockbuster deal.

By Craig Giammona and Noah Buhayar

(Bloomberg) -- It’s time for Jorge Paulo Lemann to get back in the hunt.

That, anyway, is the word inside the food industry, where the Brazilian billionaire has been doing blockbuster deals roughly every two years. In 2013, he persuaded Warren Buffett to team up on H.J. Heinz. Then, in 2015, the duo orchestrated the $55 billion merger of Heinz and Kraft Foods.

“It’s logical that this would be the year,” said David Palmer, a food industry analyst at RBC Capital.

The talk has traders on edge. Last month, a story in a little-known Swiss magazine, resurfacing well-worn speculation about Lemann’s plan to buy Mondelez with Buffett, spurred an immediate pop in the U.S. snack giant’s shares. (They soared 28 percent in just a few minutes.) So far, no deal has been announced. Regardless, the question of what Lemann might go after in 2017 has just about everyone grasping for leads. Besides Mondelez, some other names include General Mills, Kellogg and Campbell Soup.

There is even talk that Buffett’s beloved Coca-Cola, a prospect that some dismissed as fantasy, could be in play.

All the attention goes to show just how much the 77-year-old Lemann has reshaped and influenced the global food and beverage industry. In the past decade, Lemann and his Brazilian partners at 3G Capital have made their names with a run of splashy deals, including Anheuser-Busch and Burger King, and a singular vision of hacking away costs at every turn.

Modus Operandi
His team has been so effective at boosting profits that companies have had to change how they do business -- or risk becoming targets themselves. Some industry insiders have criticized 3G’s methods as draconian and short-sighted, and suggest the constant need for acquisitions reflects the fact that cost cuts alone can’t boost sales.

“We’ve been walking and chewing gum at the same time,” Rosenfeld said. She declined to discuss whether the maker of Cadbury and Oreos, a long-rumored target for 3G, has been approached about combining with Kraft Heinz.

Nevertheless, Lemann has made a believer out of Buffett, widely recognized as one of savviest and most successful investors in the world.

With Buffett, who’s sitting on an $85 billion cash hoard, the strategy is simple. Buffett ponies up the money to help finance the acquisitions and Lemann’s team does the dirty work. Invariably, that means firing workers, closing factories and paring unnecessary expenses.

When all the savings are wrung out, 3G looks for the next target. And there’s no shortage of options in the packaged-food industry, which is struggling as consumers shun traditional grocery staples for healthier options.

At Heinz, the first deal that Buffett did with Lemann, 3G immediately installed its own managers. They shuttered five factories, did away with employee perks and eliminated more than 7,000 jobs. After just 18 months, Heinz’s profit margins (based on a measure known as Ebitda) rose to an industry-leading 26 percent from 18 percent prior to the takeover.

‘Loaded Up’
That paved the way for the Kraft Foods takeover, which was announced in March 2015. At the time, 3G promised to cut $1.5 billion in annual costs by the end of 2017. So far, it’s ahead of schedule. According to research from Bernstein, Kraft Heinz is already 88 percent of the way there. Margins are also up. Before the acquisition, Kraft’s Ebitda consistently hovered around 20 percent of revenue. Now, the combined company’s margin is at 30 percent.

Investors have taken notice. Shares of Kraft Heinz have risen 23 percent since the company began trading in July 2015 -- more than double the gain of consumer staples stocks in the S&P 500 Index.

Kraft Heinz’s success is fueling speculation 3G will soon need to look for yet another target to tack on to keep things going. Last November, news that the investment firm was raising at least $5 billion to finance a new acquisition pushed shares of General Mills, Kellogg, Campbell and Mondelez higher.

“They’ve pretty much implemented the playbook, so they’re loaded up and ready to go,” said Asit Sharma, an analyst at The Motley Fool.

Takeover Talk
Many food-industry executives are already feeling the heat. Last year, Mondelez’s pursuit of Hershey was partly seen as a defensive move to bulk up and stave off a takeover. Hershey resisted and a deal never happened.

RBC’s Palmer says Mondelez, which generates more than 70 percent of its revenue outside of North America, is the most likely target for Kraft Heinz. Kraft and Mondelez split in 2012, but now the company would give 3G an international presence and plenty of room to improve margins.

A possible takeover of Mondelez, which has a market value of almost $70 billion, has even attracted the likes of hedge-fund manager Bill Ackman, who took a large stake in the company in 2015.

Other analysts have focused on General Mills, Kellogg and Campbell, which would give Kraft Heinz a stronger U.S. presence in categories like snack chips, soup and cereal, and make it easier for 3G to cut costs. Bernstein’s Alexia Howard says Kraft Heinz will buy General Mills later this year.

(3G declined to comment, as did Kraft Heinz, General Mills, Kellogg and Campbell. Buffett didn’t respond to requests for comment.)

Wild Card
One potential wild card is Donald Trump. The new U.S. president has vowed to protect American jobs and has aggressively gone after companies that have moved them overseas. Big job cuts -- a hallmark of every 3G takeover -- could draw Trump’s ire, says Ken Shea, an analyst at Bloomberg Intelligence.

“They may have a tougher time politically laying off thousands of people,” Shea said.

That hasn’t kept some investors from talking about what would be the most audacious deal of them all: a Buffett-backed takeover of Coke.

Buffett’s Berkshire Hathaway is Coke’s biggest shareholder (with a 9 percent stake) and Lemann once called the company his dream acquisition.

To swallow the $179 billion soft-drink maker, an offer would probably need to come from Anheuser-Busch InBev, which Lemann controls along with other Brazilian billionaires and wealthy Belgian families. AB InBev and Coke both declined to comment.

As recently as 2015, Buffett said a deal was “very unlikely” because Coke wasn’t looking for one. But last month, his son Howard announced he wouldn’t stand for re-election to the company’s board. CEO Muhtar Kent also said he will step down next year and hand the reins to his lieutenant, James Quincey. That’s fueled speculation a deal is more likely now.

“This seems like a situation tailor-made for a 3G transformation,” said Steve Wallman, a fund manager and longtime Berkshire shareholder.